Turkey's industrial output up 5.5 percent in June, highest in 18 months 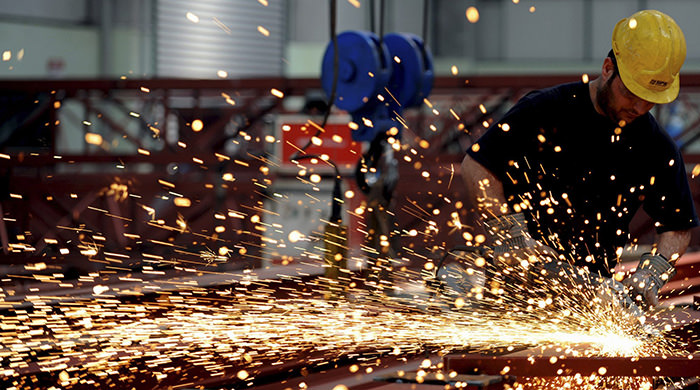 by Daily Sabah Aug 07, 2015 12:00 am
Calendar adjusted industrial production increased 5.5 percent in July compared with the same month of the previous year, according to the Turkish Statistical Institute (TurkStat). Meanwhile, seasonally and calendar adjusted industrial production increased 2.4 percent compared with the previous month with durable consumer goods having the highest increase in the main industrial grouping (MIG) with 13.3 percent. Manufacture of other transport equipment went up 32.7 percent, and manufacturing of computers, electronics and optical products rose 19.8 percent. Machinery and equipment manufacturing rose 12 percent to record the largest increases in the sub sectors of manufacturing since last month. On the other hand, the largest decreases for sub sectors occurred in the manufacturing of leather and related products down 8.5 percent, beverages down 4.6 percent and clothing down 2.2 percent, compared with June. As TurkStat data covered until the end of June, the report included quarterly comparisons. The seasonally and calendar adjusted industrial production in the second quarter increased 1.6 percent compared with the first quarter of 2015 while it increased 3.9 percent compared with the second quarter of 2014.

Science, Industry and Technology Minister Fikri Işık commented that the industrial production performance in June was better than expected considering the struggles in foreign markets. He expressed happiness for having industry lead the growth in the second quarter. Işık claimed that healthy, long-term growth is in industrial production, and for that reason they are coming up with policies that would enhance the quality and quantity of industrial production in concert with launching programs that increase the competitiveness of industrialists. Explaining the ministry's support in branding, institutionalization and bringing industries and universities closer, Işık said they are targeting to increase the added value in domestic production in order to create a basis for fast and sustainable growth. He underlined that Turkey has great potential in terms of a qualified workforce and entrepreneurial identity, which he said will translate into competitiveness and increased welfare in the future.