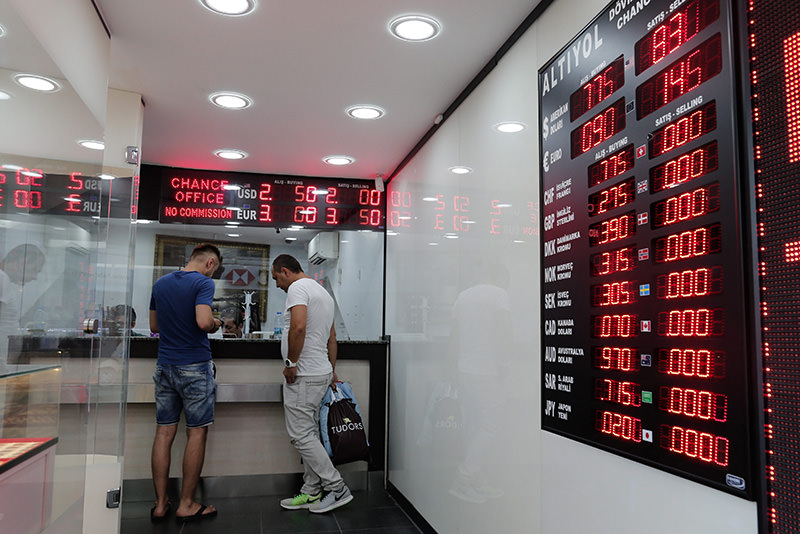 People exchange their money at a currency exchange booth in Istanbul, Turkey, 13 August 2015 (EPA photo)
by Daily Sabah Aug 14, 2015 12:00 am
The dollar has climbed to peak levels against the falling Turkish lira, as coalition talks between the Justice and Development Party (AK Party) and Republican People's Party (CHP) ended without success, and Prime Minister Ahmet Davutoğlu predicted early elections.

Starting Thursday at TL 2.77 to $1, the dollar ended the day at about TL 2.82 due to the expectations of early elections increasing throughout the day. On Friday, markets opened in Turkey with the dollar above TL 2.84, making the lira one of the two worst performing currencies since the start of 2015 with a 17 percent loss, the other being the Brazilian real. The lira's currency basket value dropped to a new low yesterday morning with dollar/TL at 3.0056.

Upon the lira's plunging to a historic low, the Turkish Central Bank lowered its one-week forex deposit rate for the dollar to 2.75 percent from 3 percent, central bank data showed.

The bank also raised the remuneration rate of foreign currency required and free reserves to 0.23 percent from 0.21 percent as the currency weakened to record levels against the dollar.

A central bank survey on Friday foresaw Turkey's economic growth this year reaching 2.9 percent at the end of the year, down from a forecast of 3 percent earlier. The survey also suggested that the GDP growth will realize as 3.4 percent for 2016, again a downward revision from its previous forecast.

The survey revealed forecast statistics with respects to other key economic parameters as well. Accordingly, USD/Turkish lira exchange rate forecast was revised to 2.83, up from the 2.76 level for the end of 2015. The consumer price index forecast, on the other hand, rose to 7.71 percent from a level of 6.78 percent.