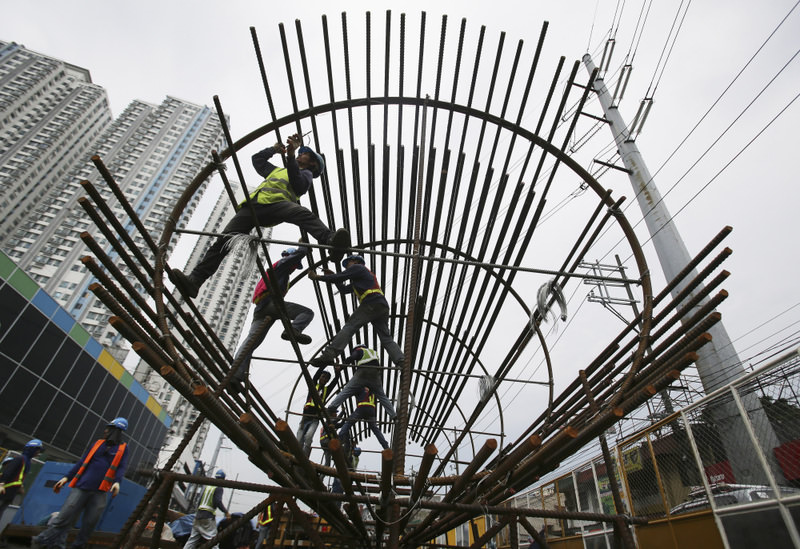 By 2020 Asian economies need to invest 80 times that of the $100 billion loan planned by Beijing counter the infrastructure financing problem, which is causing a gap in the continent's success story

Looking out at bumper-to-bumper Monday morning traffic crawling along the Philippine capital's main avenue, taxi driver Ranilo Banez shook his head in frustration. Congestion has gotten so bad as the economy grew, he said, that a 10-kilometer (six-mile) trip that once took 30 minutes can stretch to two hours. "We lose so much," said Banez, 64. "We waste a lot of gasoline and time." The Philippines is far from alone. The outpouring of support for a Chinese-led bank to finance infrastructure highlights a gap in Asia's success story: From power-starved India to Thailand's overburdened railways, developing economies face a shortage of basic facilities so severe that it threatens to hold back growth and living standards.

Manila and other cities are choked with construction sites for office and apartment towers. But spending on roads, railways and other unglamorous but essential infrastructure collapsed after the 1997 financial crisis and has yet to recover.

"The catch-up they need to do is still considerable," said Ramesh Subramaniam, director general of the ADB's Southeast Asia department. If spending fails to pick up, "then this could possibly have an impact on future growth," he said. "Certainly it is going to reduce the competitiveness of the countries in the region."

That gap has given Beijing a chance to assert its ambition to be a regional leader and fueled a diplomatic alms race. On top of its planned infrastructure bank, which 57 countries want to join, the government of President Xi Jinping has launched initiatives to improve road, rail and sea links.

Japan joined Washington in staying away from the Chinese bank. Instead, Tokyo responded in June by announcing its own credit package of $110 billion for the region. The Asian Development Bank has estimated developing Asian economies need to invest $8 trillion in the decade through 2020 or some 80 times the planned $100 billion capital of Beijing's bank.

India is set to pass China this year as the world's fastest-growing big economy. To keep that up, its government says, the nation of 1.2 billion people needs to spend $1 trillion on infrastructure in the five years through 2017. Prime Minister Narendra Modi called in May for India to speed up building "all projects that will ensure a modern infrastructure backbone." India's most ambitious initiative is the $100 billion Delhi-Mumbai Industrial Corridor Project. It calls for creating seven industrial cities, high-speed railways, six airports and three sea ports.

In Vietnam, the ruling Communist Party in June approved a proposal for a $15.8 billion second airport for its business capital, Ho Chi Minh City. To meet power demand that rises by 10 percent a year, state media say Vietnam needs to spend $50 billion in the decade through 2020 and another $75 billion over the next decade. They put Vietnam's spending needs for highways at $22.5 billion in 2015-20.

Thailand has a 3 trillion baht ($92 billion) building plan for 2015-22 that includes high-speed train routes that eventually will stretch from China in the north through Malaysia in the south to Singapore. It calls for expanding seaports and Bangkok's commuter trains.

In the Philippines, President Benigno Aquino III in May approved $1.4 billion in spending for seven projects including commuter rail in Manila, upgrading 339 kilometers (211 miles) of national roads and irrigation for 70,000 hectares (175,000 acres) of farmland. Bjorn Pardo, founder and CEO of Xend, a delivery company in the Philippines with 250 employees, said it copes with congestion by using custom-outfitted motorcycles instead of trucks. "The traffic situation will not get significantly better anytime soon," said Pardo in an email.

The Philippines ranks 95th out of 144 countries on a World Economic Forum survey of infrastructure quality. Its 2011-16 development plan promises to reduce the number of homes without access to power and running water and build ports, railways, power plants and cargo terminals. "Our priority will be energy," said Benjamin Diokno, an economist at the University of the Philippines and former Cabinet secretary. "The urban rail system is also pressing. The railway system from north to south is pressing. Everything is pressing."

The Asian Development Bank says if the required facilities are built, the region's people could get an extra $4.5 trillion in income in the decade through 2020 and another $8.5 trillion after that. Many have yet to work out how to pay for those projects.

Before the 1997 crisis, public works spending in many developing Asian economies was equal to 6 to 8 percent of annual economic output.

Post-crisis, that tumbled to as little as 2 percent. It dipped below 1 percent in the Philippines in 2010. Today, it is below 3 percent in Indonesia, Pakistan and other economies less than half the level the ADB says is needed to support growth at current levels.

In the Indonesian capital, Jakarta, courier Yusuf Abdillah complained he loses two hours a day in traffic jams that can stretch up to eight kilometers (five miles). "I'm fed up," said Abdillah, 28. "The government is being irresponsible." Many governments want to draw in money from pension funds, insurance companies and other private investors.

The Philippines hopes encouraging private investment will help boost infrastructure spending from 3.4 percent of gross domestic product this year to 5 percent next year, according to Economic Planning Secretary Arsenio Balisacan.

But many projects have yet to be structured as profit-oriented ventures to repay investors. And investors are wary of political interference and potential delays over environmental and other concerns. China has pledged to supply most of the initial $50 billion in capital for its Asian Infrastructure Investment Bank. In June, governments including Britain, New Zealand, France, Australia and South Korea signed an agreement on the bank's basic principles.

Still, the ADB's Subramaniam said the region's total spending is likely to be less than half the amount required. "The continuing unmet needs clearly indicate we need more resources and different ways of structuring projects," he said.
RELATED TOPICS