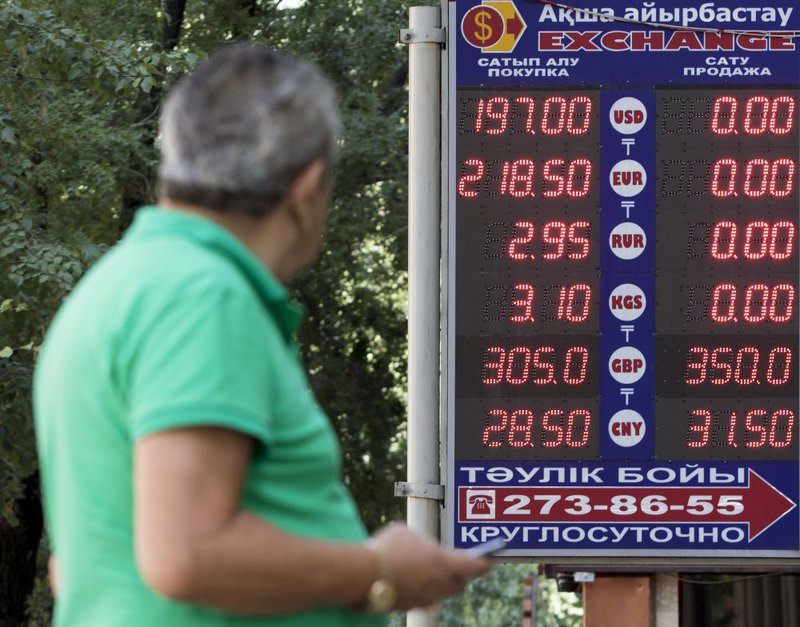 A man uses his mobile phone as he walks past a board showing currency exchange rates in Almaty, Kazakhstan.
by Aug 21, 2015 12:00 am

Kazakhstan's under-pressure tenge lost more than a quarter of its value on Thursday after the oil producing central Asian nation, hit by a sharp fall in world crude prices, introduced a freely floating exchange rate for the currency

The tenge lost more than a quarter of its value on Thursday as Kazakhstan fired the latest salvo in an emerging market currency war, ditching a trading band stretched to breaking point by sharp falls in crude and commodities prices.

Prime Minister Karim Masimov said floating the tenge would recover ground that oil-dependent Kazakhstan has lost to declines in the currencies of some of its major trading partners and rivals. "I believe (this)... will now allow Kazakhstan to be more competitive..., including on the markets of our neighbours," he told a news conference, referring to Russia and China, which sent shockwaves through emerging markets last week by devaluing the yuan. The float was welcomed by Kazakh oil and mining sector firms.

But analysts warned it might prompt similar action by others in the region, and it dismayed ordinary Kazakhstanis, who had already seen the tenge devalued three times since 1999. "I am going to a bazaar right now, and the tenge in my wallet are weighing less and less," translator Alexei Chernoussov wrote on his Facebook page. "I don't know if I will buy something before this cash simply evaporates."

The official tenge rate tumbled by 26.2 percent to 255.26 per dollar yesterday and exchange offices in the financial capital Almaty said they were selling dollars at 253.

Kazakhstan's central bank most recently devalued the tenge, by 19 percent, in February 2014, and the currency has been under immense pressure since last year when the rouble of key trade partner Russia collapsed, driven lower by western sanctions as well as oil's declines.

Kazakhstan, Central Asia's largest economy and No.2 post-Soviet oil producer after Russia, suffered a 40 percent fall in exports between January and July, said National Economy Minister Yerbolat Dosayev, due to the sharp drop in global oil and commodity prices. Imports shank by 20 percent in the same period, he said.

Prime Minister Masimov said that low prices for Kazakhstan's commodity exports, which also include significant quantities of metals, might last for five to seven years. On Wednesday another, smaller trading partner, Vietnam, devalued its dong, and Demetrios Efstathiou, head of CEEMEA Strategy at ICBC Standard Bank in London, said the manat of Caspian Sea neighbour Azerbaijan might be the next domino to drop.

Azerbaijan devalued the manat by 35 percent in February in reaction to low oil prices. "A (Brent) oil price in the mid-$30s may change the situation (again) however," Efstathiou said, adding energy-hungry neighbour Armenia could let its dram currency lose 10-15 percent in the next three to four months. As of 0842 GMT benchmark Brent crude traded at $46.62 per barrel.

A domestic lobby pressing for a weaker tenge had included Kazakh oil and mining sector firms, which were among those that benefited hugely from last year's devaluation. Shares in London-listed copper miner Kaz Minerals jumped by 19.3 percent as of 0842 GMT. The London-traded stock of KazMunaiGas Exploration Production rose 8.8 percent.

"This is not a devaluation, this is a transition to a freely floating rate when the market itself determines a balanced exchange rate," he told a news conference broadcast from the capital Astana. He also said the central bank would no longer intervene massively to influence the tenge rate and the bank and government said the country's economic policy would henceforth be based on inflation targeting

That brings Kazakhstan's policy more into line with Russia, whose central bank floated the rouble late last year and announced a shift to an inflation-targeting regime, but still periodically reacts to bouts of rouble weakness.

The government may trim its budget spending this year, Masimov said. He said next year the cabinet would not borrow on foreign capital markets to bridge the fiscal gap of the state budget, which would be based on a "conservative scenario" of $40 per barrel oil. But the government also had no plans to open the "rainy day" National Fund, which collects windfall oil export cash and is now worth $69 billion. "We think the worst times may yet come, and we will need the National Fund then," he said.