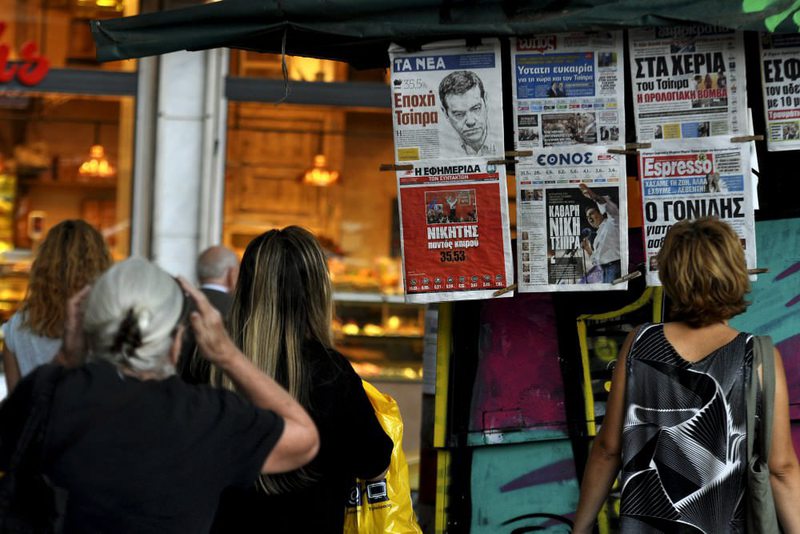 by Sep 22, 2015 12:00 am
From farmers to pharmacists, pain lies in store for Greeks across the board as the new government readies to raise taxes and rewrite the economic rule-book in line with tough reforms demanded by the country's international creditors. The controversial economic to-do list set to upend daily life was signed and sealed in July by leftwing premier-elect Alexis Tsipras, in return for an 86-billion-euro rescue by the lenders, the third EU-IMF rescue of Greece in five years. Under the deal, creditors chalked up some 15 "prior actions" to be passed by parliament by October - days after Sunday's general election.

Also to come in October is the first review by the lenders of whether Athens is abiding by the cash-for-reform program. At stake for the new government will be the release of a new 3-billion-euro tranche of aid. Greece's new parliament will have to revise the 2015 budget, taking into account pension and income tax reforms, including taxes on farmers' income that are set to double from 13 percent to 26 percent by 2017. Tax on income of less than 12,000 euros a year earned by Greeks is to rise progressively from 11 to 15 percent, and from 33 to 35 percent for annual income of more than 12,000 euros. Defense spending will be cut and ship owners will remain in the line of fire, with a tax on tonnage renewed for an extra four years.

There will be new cuts on pensions, aimed at reaching savings of around 0.25 percent of GDP in 2015 and around 1 percent of GDP by 2016. After an initial hike in VAT in July, a second increase is set for October when hotels and affluent Greek islands lose the right to reduced VAT rates.

Early retirement schemes, from age 50 onwards, will be scrapped between this year and 2021 with retirement gradually set for all after 40 years of work.

Tax evaders are to face tougher punishment, even those who own up first.

Greece will liberalize parts of the retail industry, enabling non-pharmacists to open pharmacies, medicine to be sold in department stores, bread sold elsewhere than in bakeries and sales held throughout the year rather than at set dates. The new government must also open up professions including engineers and notaries where entry currently is restricted. Greece has promised to sell off 6.4 billion euros of state assets by 2017 - 1.4 billion this year, 3.7 billion in 2016 and 1.3 billion in 2017. By October the new government will have to present a calendar for the sale of the ports of Piraeus and Thessaloniki as well as the operator and manager of the ROSCO railway network.
RELATED TOPICS