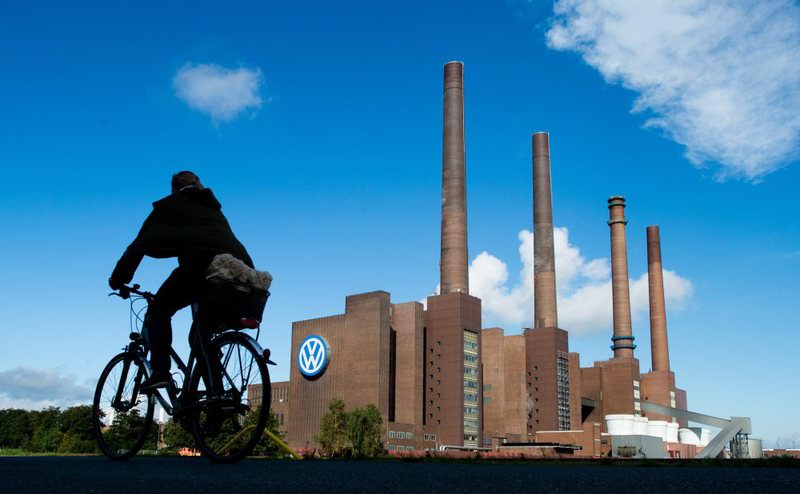 A cyclists makes her way past the Volkswagen plant in Wolfsburg, Germany.
by Associated Press Sep 24, 2015 12:00 am

While Germany assesses the impact of suspect Volkswagen software, economists are voicing worries over the impact of the crisis on German growth

German giant Volkswagen's rigging of emissions data in the U.S. could have serious repercussions around the world - and not just for Volkswagen. Economists are beginning to voice some worries over the impact on German growth from the Volkswagen crisis.

Brzeski concedes that it is "unclear" what the impact of the VW crisis will be, but that there will likely be one given the size of VW. It is, he notes, "one of Germany's most important global champions" and an "important growth driver for the German economy."

And Jennifer McKeown of Capital Economics said the Volkswagen scandal is a new risk to German growth to go alongside the slowdown in China. In the second quarter, Germany grew by a quarterly rate of 0.4 percent. Germany's transport ministry denied on Wednesday that it had known about the technology Volkswagen used to cheat emissions tests despite acknowledging only months ago that it knew of a general gap between 'test' and on-road emissions.

Germany's transport minister says it remains to be seen what effect the suspect software built into some 11 million Volkswagen diesel vehicles actually had. Minister Alexander Dobrindt has set up a commission to examine whether the cars were built and examined in compliance with German and European rules.

David Madden, market analyst at IG, said the sector as a whole is one "to swerve until there is a conclusion to this saga."

The head of Germany's main industry lobby organization is calling for "transparency, openness and speed" in getting to the bottom of the Volkswagen emissions scandal.

Ulrich Grillo of the Federation of German Industries said in a statement Wednesday that "'made in Germany' stands for excellent products."

German engineering and German craftsmanship are "rightly respected worldwide," he added. Grillo says his organization "strongly criticizes any manipulation." He said of the Volkswagen scandal that "any misconduct must be cleared up completely."

Several law firms are filing class action lawsuits against Volkswagen over its admission that it used special software to get its cars to pass U.S. emissions tests.

Clifford Law Offices, based in Chicago, says it is filing a complaint to the Northern District of Illinois alleging that VW engaged in deceptive and fraudulent business practices.

Meanwhile, law firm Sutts, Strosberg LLP, based in Windsor, Canada, was reported in local media to have filed a class action lawsuit seeking $1 billion in damages and $100 million in punitive damages.

The European Automobile Manufacturers Association, which represents major European automakers including Volkswagen, says it "recognizes the gravity of the situation and is taking this very seriously." However, it said "there is no evidence that this is an industry-wide issue." VW has admitted to using software to get its cars to pass U.S. emissions tests. It is facing the prospect of multiple investigations and lawsuits. Meanwhile, Martin Winterkorn, who resigned as CEO on Wednesday, apologized for the deception under his leadership. "Millions of people across the world trust our brands, our cars and our technologies," Winterkorn said Tuesday in a video message. "I am endlessly sorry that we have disappointed this trust. I apologize in every way to our customers, to authorities and the whole public for the wrongdoing."

In October 1998, the WVU Center for Alternative Fuels, Engines and Emissions discovered that more than 1.1 million trucks whose heavy-duty diesel engines had passed emission inspections at the factory were polluting much more than allowed because of devices designed to overcome emissions controls, Dan Carder, interim director of the unit, told The Associated Press. The Justice Department publicly announced the findings, after which several manufacturers agreed to a $1 billion settlement.

In the Volkswagen case, the WVU research team was hired by a nonprofit pollution control advocate, the International Council on Clean Transportation, to measure emissions on three cars: a 2012 VW Jetta, a 2013 VW Passat and a BMW X5 SUV. The BMW passed, but the university found significantly higher emissions from the Volkswagens, according to the U.S. Environmental Protection Agency.

The university and the council reported their findings to the EPA and the California Air Resources Board in May 2014, but VW blamed the problem on technical issues and unexpected conditions. The automaker even did a recall late last year, without much improvement, the EPA said.

Only when the EPA and the California board refused to approve VW's 2016 diesel models for sale did the company acknowledge putting stealth software in millions of its vehicles worldwide. In informing Volkswagen of the violations, the EPA and CARB cited WVU's research. Because smog tests are almost always done on dynamometers, VW got away with the scheme for seven years, until the "clean transportation" advocates went to WVU, which tests emissions using equipment that fits in car trunks.
RELATED TOPICS