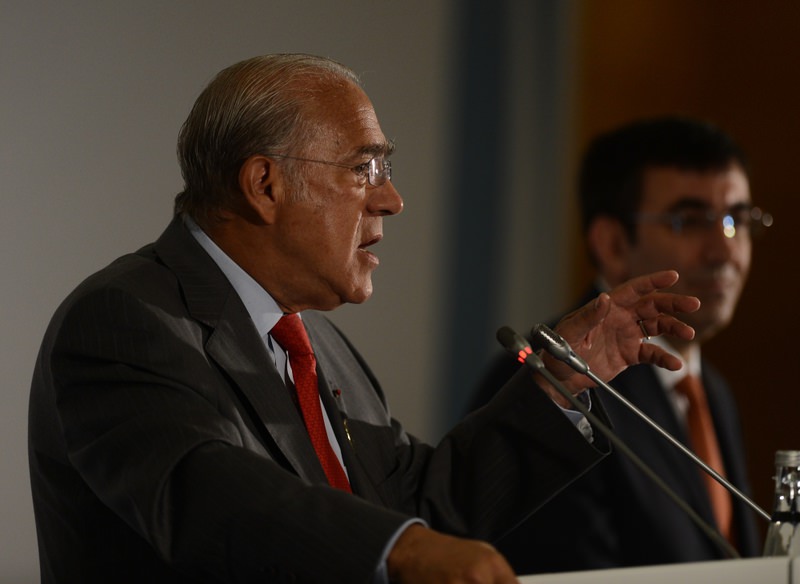 by Anadolu Agency
Oct 05, 2015 12:00 am
Angel Gurria, the secretary-general of the Paris-based Organization for Economic Co-operation and Development (OECD), said the economy is "picking up" and would grow by 4 percent next year.

On the sidelines of the OECD's annual retreat meeting, which was held in Istanbul on Friday, Gurria told Anadolu Agency that the global economy is slowing down. "Investment is dormant; trade is now growing at less than 3 percent. It should be growing by 5 or 6 percent," Gurria said. The Mexican diplomat stressed that he was worried about impending monetary policy decisions by the U.S. Federal Reserve (Fed) and Chinese economic growth. "China is going to be all right, but slowing down," he said. The world economy has been affected by uncertainty over a possible Fed rate hike, the ongoing slowdown in the Chinese economy and weak commodity prices.

Meanwhile, the Fed is set to decide whether to increase interest rates for the first time since 2006. Fed Board Chair Janet Yellen said in a speech on Sept. 22 that a rate hike would take place this year. Therefore, there has been a concern among investors that a rate hike will spur an outflow of funds from emerging markets as it did in January 2014.

Amid a grim outlook on the world economy, Gurria said optimistically that the Turkish economy would grow 3 percent this year and would grow 4 percent next year. Adding that Turkey has highlighted the important social issues of women's employment, youth employment and individual qualification for employment during the G20 event it is hosting this year, Gurria said, "Turkey is picking up." He also commended Turkey's hosting of more than 2 million Syrian refugees.

In spite of the current bad picture of the global economy as portrayed by Gurria, his optimistic comments on the Turkish economy seem to be supported by Finance Ministry statistics, which reported that the economy grew 3.8 percent in the second quarter. Moreover, industrial production was up 0.3 percent in July, the Turkish Statistical Institute (TurkStat) reported, and domestic demand was up 0.4 percent in the same month.

Additionally, with foreign direct investment still substantial at $9.71 billion from January to July, according to the Central Bank of the Republic of Turkey (CBRT), Turkey is holding out well despite the difficult global climate for investment, regional instability and political fragility in the country.