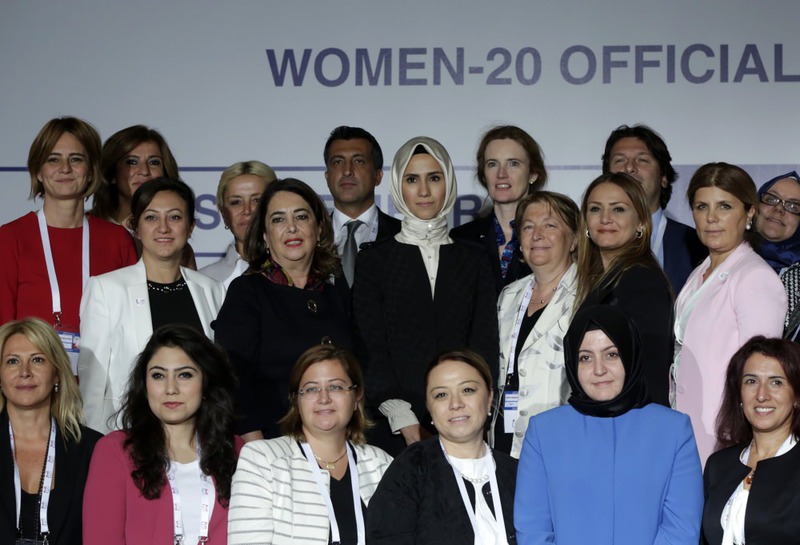 The increase in the participation of women in the laborforce would lead to a fairer income distribution on a global scale, which would also bring more peace and love to the whole world, W20 leaders say

During the Woman-20 (W20) Summit, organized as a part of the G20 Summit, Turkish Businesswomen Association (TİKAD) chair Nilüfer Bulut said that she firmly believes that enhancement of female participation in the labor force would result in fairer income distribution, which would also bring about more peace and love in the world. She added that an increase in the presence of women in policy and decision-making would turn the world into a better place that is more worth living in. In her speech, Bulut encouraged women to be more active in policy, bureaucracy and business, without any fear.

As a support to these statements, President Recep Tayyip Erdoğan, who participated in the opening of the summit, said that women's involvement in the workforce is a crucial opportunity to achieve higher growth. He also said that despite the fact that many women attempt to participate in business life either on a small or medium scale, they could not carry their businesses forward because they do not have opportunities equal to those of men. Therefore, they either quit or stay in the same position.

Bulut also said that women's access to financing should be easier. However, under current conditions, this does not seem likely because the current banking system does not protect women.

Woman and Democracy Association (KADEM) chair Sare Aydın underlined the importance of women for both a fairer and better world, saying, "The world needs the efforts of women to revive the economy and maintain social developments." Aydın also stressed that without female participation in the labor force, it is not possible to achieve exhaustive and sustainable economic growth. Aydın added that as one of the main objectives of W20 in this respect, a more sexist approach through positive discrimination would help women get rid of all the obstacles ahead so that they can better participate both in social and economic life.

She further emphasized that in a globalizing world, thanks to the fair sharing of social roles among females and males, women will have more opportunities to be more active in both social and professional life, adding that this could only be achieved with the help of important reforms.

Aydın pointed out that the W20 determined some policy areas with a view to contribute to global economic development, also saying that this can only be achieved if those policy areas also involve the protection of women's rights.

In addition, Turkey's Women Enterprisers Association (KAGİDER) chair Sanem Oktar asked for more support to enterprises owned by women, underlining that women have a lot of influence in the businesses where they work. Indicating that businesses owned by women have very weak ties with public financing and they can only participate in 1 percent of this kind of financing, Oktar suggested that this problem could be solved if there is a concrete and precise target or quota.

She also suggested that with more female participation in business, there could even be some tax exemptions for women, so that they can be encouraged and relieved. Noting that female participation in politics accounts for 20 percent of the total, Oktar also claimed that with an increase in this participation, wars would notably decrease due to the communication abilities of women. She concluded her speech wishing for a more sustainable, habitable world by implementing everything spoken about at the G20 to be closer to the targets.