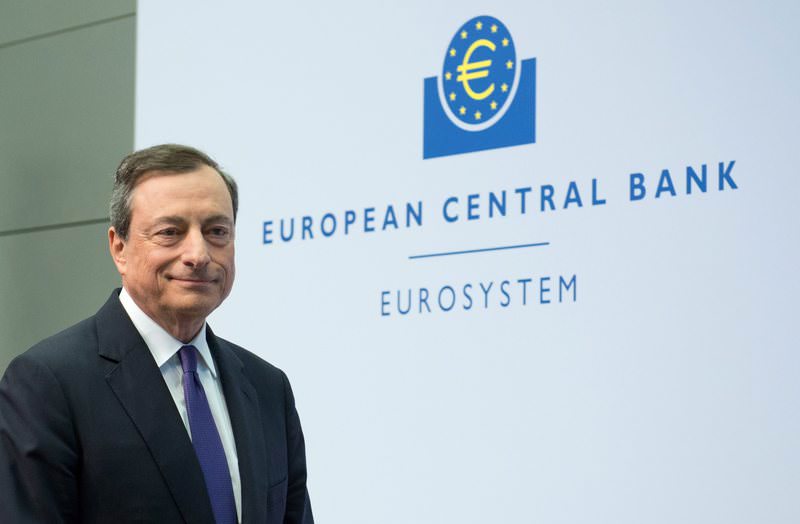 President of the ECB, Mario Draghi, arrives for his news conference in Frankfurt/Main, Germany, 15 April 2015. (EPA Photo)
by French Press Agency - AFP Oct 22, 2015 12:00 am
Amid worries about China and developing markets, European Central Bank chief Mario Draghi on Thursday held out the possibility of further economic stimulus for the eurozone as soon as December.

The central bank for the 19-nation eurozone agreed after a two-day meeting in Malta to keep its powder dry, holding its key interest rate steady at a record low 0.05 per cent and taking no immediate new measures.

But in a news conference after the decision, Draghi gave a broad hint that the powerful bank is ready to use its ammunition if needed, sending financial markets higher as they anticipated more action to stimulate economic activity.

"The degree of monetary policy accommodation will need to be re-examined at our December meeting," Mr Draghi told a news conference.

"No decoding was required - this was an uncharacteristically clear statement of intent," said David Lamb, head of dealing at foreign exchange specialists FEXCO.

"The ECB is still deeply concerned about the threats to the eurozone's patchy recovery, and is planning to announce more QE before the end of the year." he said.

ECB's decision-making governing council had discussed a possible further rate reduction on the bank's so-called deposit facility, which is already negative at minus 0.2 percent.

"No decision was taken just yet. It was an open discussion," the central bank chief said.

Analysts say the strong euro, falling consumer prices and fears of a global economic slowdown as China's once booming expansion cools, provide ample argument for the ECB to ease monetary conditions still further in the 19 countries that share the euro.

Markets have begun to speculate that the ECB could soon accelerate or increase its programme of so-called quantitative easing (QE), given that consumer prices declined by 0.1 percent in the euro area in September, raising fears of a dangerous downward spiral of deflation. "Inflation rates will remain very low in the near term," Mr Draghi said.

In March, the ECB embarked on a scheme of sovereign bond purchases - more than 1.0 trillion euros in all at a rate of 60 billion euros per month - to bring inflation back up to levels that are more conducive to healthy economic growth. While falling prices might appear to be good for consumers, they can be poisonous to the economy. The fear is that deflation could become entrenched if consumers delay purchases in the hope of lower prices later, which in turn prompts companies to hold off investment, creating a vicious circle of falling demand and fewer jobs.

Some analysts believe the ECB could extend the QE programme beyond its original timeframe of September 2016 or accelerate or increase in the total amount of bonds purchased.

ECB executive board member Benoit Coeure recently pointed out, however, that only a third of the QE programme had been executed so far. And with the beneficial effects of a range of other policy measures - unprecedented amounts of liquidity and historically low interest rates - still only gradually making themselves felt, it was "premature to discuss" a new QE programme, Coeure said. Nevertheless, "it is certainly our duty to be prepared to cope with all kinds of contingencies," he added.