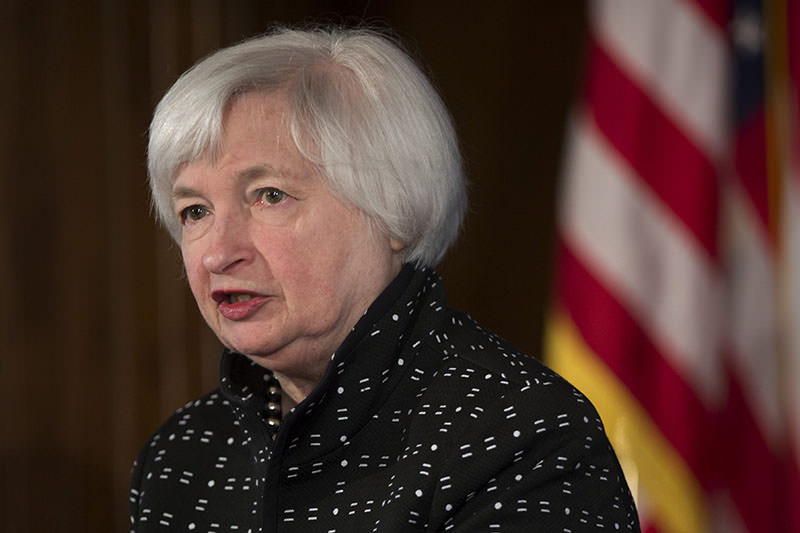 Chair of the Board of Governors of the Federal Reserve System Janet Yellen delivers opening remarks at a conference on Monetary Policy Implementation and Transmission in the Post-Crisis Period (EPA Photo)
by Nov 18, 2015 12:00 am
A solid core of Federal Reserve officials rallied behind a possible December rate hike at the central bank's last policy meeting, but central bankers also debated evidence the U.S. economy's long-term potential may have permanently shifted lower.

After a summer and early fall that saw the Fed rattled by U.S. market volatility and a sell-off in China, "most" participants felt conditions for a rate hike "could well be met by the time of the next meeting," minutes of the Fed's Oct. 27-28 meeting released on Wednesday said.

The decision was made to make an unusually direct reference in their post-meeting statement to a possible December rate hike, with only "a couple" of members expressing concerns about setting too strong an expectation of action, according to the minutes. Staff outlined how the Fed had potentially fallen behind in communicating its intentions, with markets pushing expectations of an initial rate hike into next year.

The language in the October statement drew those expectations quickly back to December.

"The U.S. financial system appeared to have weathered the turbulence in global financial markets without any sign of systemic stress," the minutes said. "Most participants saw the downside risks arising from economic and financial developments abroad as having diminished and judged the risks to the outlook for domestic economic activity and the labor market to be nearly balanced."

But despite the faith in the near-term outlook, the Fed also debated what could become a core concern as it enters its first policy tightening cycle in a decade - the underlying potential of the U.S. economy.

The debate took the form of a discussion of the equilibrium real interest rate - the policy rate, net of inflation, that would be consistent with full employment and the Fed's 2 percent inflation goal. Central to many macroeconomic models, the estimated equilibrium rate forms a barometer of sorts for how far current rates are from "normal," and how much stimulus the central bank has built into the system.

According to staff estimates, the equilibrium rate likely fell below zero during the crisis, has only recovered a bit, and is "close to zero currently."

For the Fed that may mean little room to maneuver if it wants to avoid tightening financial conditions too quickly, and may mean that it will never get too far from the zero lower bound.

The concern is serious enough that "several" Fed officials felt it would be "prudent" to plan for other ways to stimulate the economy if low rates become permanently embedded.