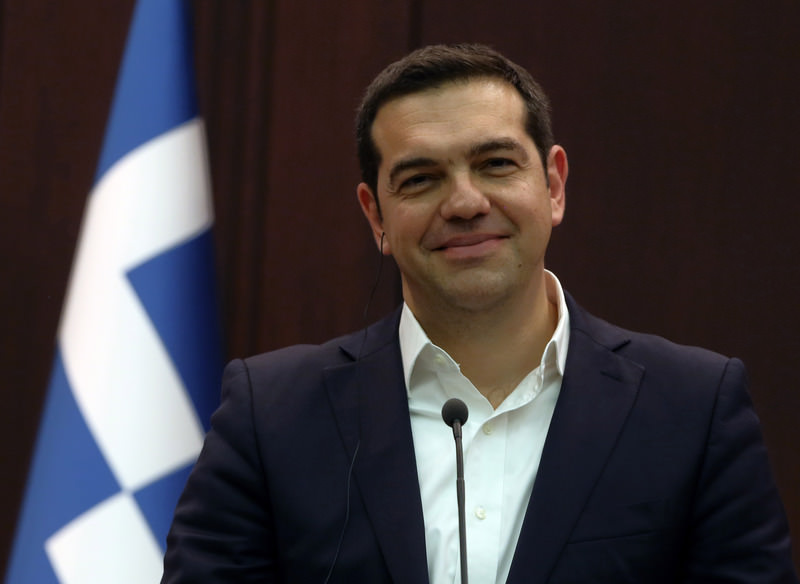 Greece's Prime Minister Alexis Tsipras listens during a joint news conference with his Turkish counterpart Ahmet Davutoglu at Cankaya Palace in Ankara, Turkey, Nov. 18, 2015. (AP Photo)
by Anadolu Agency Nov 23, 2015 12:00 am
The European Stability Mechanism on Monday announced the release of a much-needed tranche of bailout funds for Greece on Monday.

The 2 billion euros ($2.12 billion) disbursement approved on Monday will primarily be used for debt service, as well as for arrears clearance, and co-financing projects funded by EU structural funds, the fund said in a statement.

After a long period of fraught negotiations between the Greek government and the lenders and the enactment of a new series of reforms by the Greek parliament on Thursday, the president of the Eurogroup Jeroen Dijsselbloem announced from Brussels on Saturday that "Greece has implemented all the reforms of the first package agreed with its creditors."

"Based on the final report, the Euro Working Group agreed that the Greek authorities completed the first set of prerequisites and measures in the financial sector that are important for a successful recapitalization [of the Greek banks]," said the Dutch politician.

According to Greek media, the creditors issued another list of measures to be adopted by Parliament as soon as possible which will help unlock another 1 billion euros ($1.062 bil) in bailout funds.

The new set of prerequisites is expected to include an agreement on the regulation of non-performing bank loans, changes in the public sector revenue service, the formation of a task force which will be responsible for setting up a new state asset fund, the privatization of the Independent Power and Transmission Operator (ADMIE) and the adoption of the product market reforms recommended by the Organization for Economic Cooperation and Development (OECD).

However, there is still a lot to be done. The overall aim of the country's creditors is to check on the progress of the Syriza-Independent Greeks government in two weeks. However, it is unlikely that the process will be completed before Christmas which means that the first review of the third bailout program will probably take place early next year.

The coalition government has been determined to complete the first creditor's review under the bailout package signed in July, in order to start talks with lenders on debt relief by the end of this year.
Last Update: Nov 23, 2015 10:20 pm
RELATED TOPICS