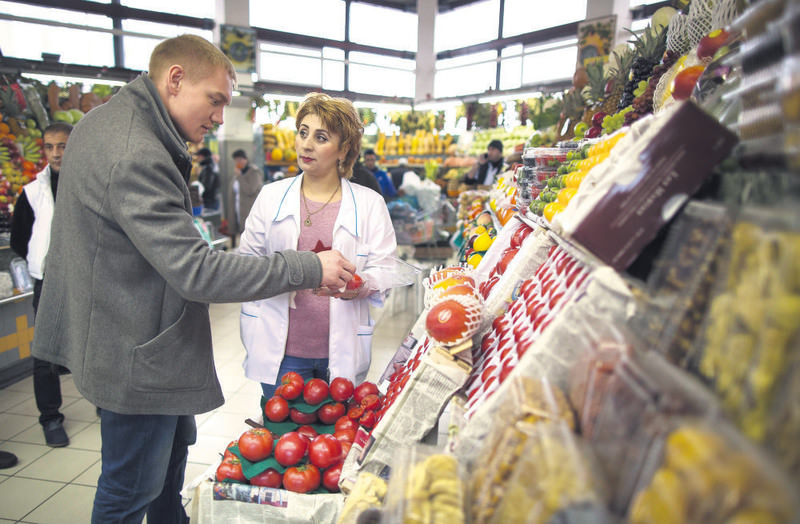 Russia puts $30 billion in annual trade volume on the line by widening economic sanctions on Turkey, while Turkish government officials seek way to minimize damage to the economy and respond to Russia's vengeance

Russia will restrict its imports of Turkish fruit and vegetables as part of a new group of sanctions following Turkey's downing of a Russian warplane last week. Turkey, on the other hand, is looking for ways to cover its losses of the businessmen and to respond Russia with similar measures. Analysts believe that the situation will pose economic risks to both countries, putting $30 billion in annual trade volume on the line.

"Russia would also be a big loser if, as a result of the current tensions, Turkey moves more aggressively to shift its energy imports away from Russia -- as Ukraine is currently doing. This could mean increased efforts to rationalize and reduce consumption and to seek new energy suppliers in the region. Net-net, Russia needs to be careful in how far it seeks to damage political and trade relations with Turkey," wrote London-based Nomura credit strategist Timothy Ash in a message sent via email Monday. For now, further sanctions are being worked out. Economic Development Minister Alexey Ulyukayev told a Russian television network on Monday: "We may suspend work on some major projects previously agreed upon with Turkey. This includes a five-year bilateral program from 2016 to 2020 under a free trade agreement in services and investment, economic trade agreement and scientific-technical cooperation agreement to establish a joint investment fund. All those activities will be stopped."

In response to the difficulties created by Russia, Turkey will carefully examine goods imported from Russia and impose certain restrictions. Also, Turkey will create the same difficulties for Russian vehicles seeking to enter Turkey as Russia did for Turkish trucks and ships. Furthermore, as a response to Russia extending its sanctions, free trade agreements will be discussed again to slow the implementation of some agreements that have already been reached.

On Sunday, Russian President Vladimir Putin signed the order imposing sanctions on Turkey. Turkish companies operating with Russia and Turkish staff employed by Russian companies will face restrictions, and there are now limitations on specific Turkish exports. The Russian move comes after two Turkish F-16 fighter jets intercepted an unidentified warplane during routine aerial patrol and within the rules of engagement on Tuesday, after it violated Turkish airspace on the Turkey-Syria border. The intruding aircraft was warned about the violation 10 times within five minutes before it was shot down. Despite Russia's swift move to impose sanctions following the event, the Russian economy cannot replace what Turkey exports to the region, according to Stanislav Tkachenko, a professor in the international relations department of St. Petersburg State University, in a statement published in the Russia Direct on Nov. 26.

"The structure of bilateral trade clearly benefits Russia more than Turkey," Tkachenko wrote. "In 2014, Turkey ranked fifth among Russia's partners in terms of exports ($25 billion of mainly natural gas, metals and agricultural products). At the same time, Russia buys products from Turkey that it needs for its economy (machinery, equipment, textiles, building materials, food) that cannot be replaced overnight with Russian substitutes."

The economic cost of severing ties with Turkey could exceed $30 billion, and for some sectors of the Russian economy (energy and metallurgy) it would be a heavy blow, Tkachenko said. "The fragile shoots of economic growth in Russia, after nearly a year of recession, would be torn out of the ground," he added. Russian wheat exports are clearly under pressure already, as stricter control of the selling of this commodity to Turkey have delayed deliveries, according to Daryna Kovalska, an analyst at Macquarie, an investment bank, in London. Russia brings in $4.1 billion in wheat sales every year in exports to Turkey which is now at stake.

Russia's decision to impose economic sanctions on Turkey has spurred Ankara to take action. An inter-ministerial coordination committee has been established to manage the crisis set off by the downing of a Russian fighter jet that violated Turkish airspace near the border with Syria. The committee, which includes three different teams to deal with economy, energy and security issues separately, convened to address the potential consequences of Russia's sanctions and to take countermeasures under the presidency of Deputy Prime Minister Mehmet Şimşek. During Monday's meeting, the committee determined the primary steps to be taken on economic and energy-related issues. The committee discussed Russian sanctions, which concern the tourism sector and exports, their potential costs and the ways of compensating for losses that the Turkish food and tourism sectors might face. Accordingly, urgent measures will be taken to protect exporters of fresh fruits and vegetables, white meat, leather, textiles and ready-to-wear goods. Turkish perishable goods, which are deliberately being held at Russian customs, will be rapidly reinstated and other consumer durable goods will be directed to alternative markets.

The losses in the tourism sector, which stem from the cancellations of reservations by Russian tourists, will be compensated by organizing discount travel package sales in other countries. Additionally, an incentive package will be prepared for tourism agencies.

Although Turkey thinks that Russia will not stop its natural gas exports to Turkey, it nevertheless is exploring backup plans considering that natural gas is the most important trump card for Russia. Turkey is taking several precautions in this regard.

Private natural gas cycle plants and some industrial enterprises will be informed about how to be ready for a transition to production with alternative fuels. Articles of agreement will be signed over the Akkuyu nuclear power plant. The articles of the interstate agreement over the construction of the Akkuyu nuclear power plant will be maintained on a principal basis. Turkey will wait for a move from Russia, which has allocated $3 billion so far. In case of developments that render the construction impossible, Turkey will start negotiations with other countries with nuclear technology.

In response to Russia's sanctions, consumer durable goods will be directed to alternative markets. New cooperation agreements will be sought in Asia and Africa. Perishable goods such as fresh fruits and vegetables and white meat which are deliberately held by Russia at customs will be redirected. Turkey will lend impetus to its endeavors to launch initiatives in foreign trade. Relations will be improved with the Asia-Pacific region. Trade relations will be intensified with countries such as China, Indonesia, Malaysia and Korea. Support for tourism agencies will also be increased. With Saturday's decree, Russia put a ban on charter flights between Russia and Turkey and ordered Russian tourism companies to stop selling travel packages to Turkish tourists. Turkey will take a series of steps not to let Turkish tourism sector be harmed by Russian tourists' cancellation of travel reservations. The measures include a number of topics such as discount sales campaigns and incentive packages.
Last Update: Dec 01, 2015 12:51 pm
RELATED TOPICS