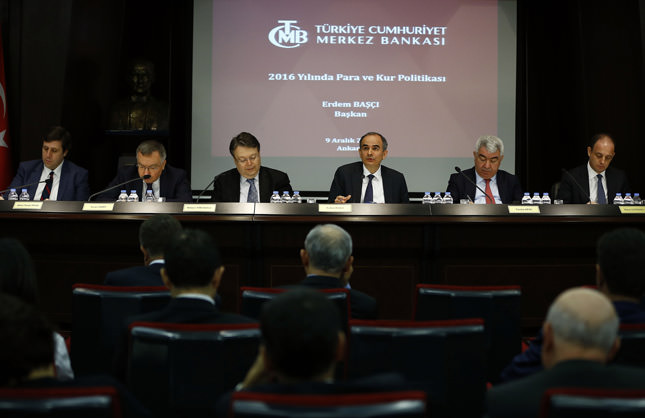 by Anadolu Agency Jan 07, 2016 12:00 am
Simplification of Turkey's interest-rate structure may start at the next monetary policy meeting in January, Erdem Başçı, governor of the Central Bank of the Republic of Turkey said on Thursday.

Speaking at a presentation to the parliament's Planning and Budget Commission, Başçı said: "With the start of normalization of global monetary policy, it is possible that volatility in financial markets may moderate. Should this occur, the simplification of Turkey's monetary policy may begin at the next meeting of the Monetary Policy Committee."

In a road map outlined last August, the central bank indicated that Turkey's interest rate structure, which has an upper and lower band, may be simplified, with the focus on the lower band, the one-week repo rate. The distance between the upper and lower part of the so-called "interest-rate corridor" is too narrow.

The one-week repo rate is 7.50 percent, the lower band, and the upper band is 10.25 percent, for the overnight rate.

Başçı added: "The current monetary policy stance, in consideration of the inflation outlook, will remain tight." Other objectives, Başçı said, were the stabilization of foreign exchange liquidity and the achievement of financial stability."

Başçı also noted the improvement of the current account balance, and pointed out that the recovery of demand from the European Union is supporting increased Turkish exports.

He welcomed the projected implementation of recently announced structural reforms by the government, saying that they may boost economic growth.
Last Update: Jan 08, 2016 7:16 pm
RELATED TOPICS