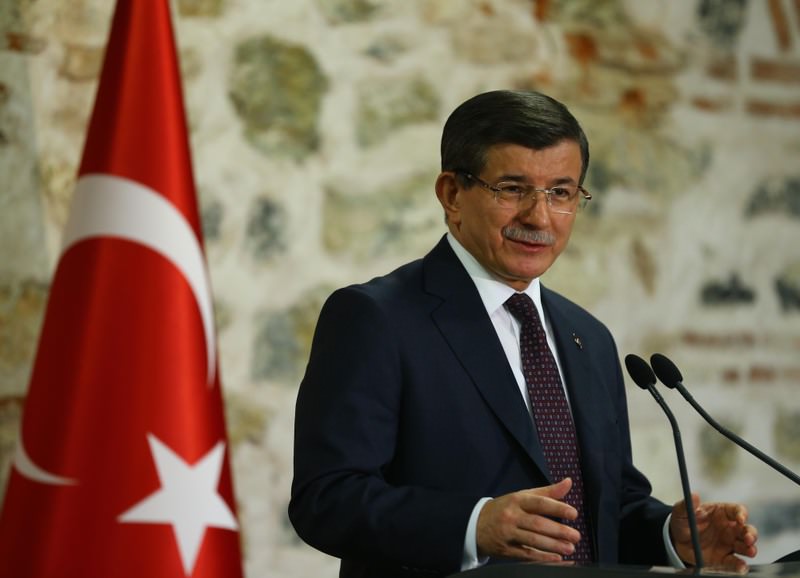 by daily sabah Jan 18, 2016 12:00 am
Prime Minister Ahmet Davutoğlu started his one-week "investment tour" on Sunday which will include visits to London, Davos and Berlin. The first visit will be to London, where Davutoğlu will meet with 350 leading investors, who collectively manage around $10 trillion. Davutoğlu will give the opening speech at the 16th Turkish Investment Conference organized by Bank of America Merrill Lynch, a leading investment bank, and will address various business circles as well as invite international investors to Turkey, at various events organized by Bloomberg, Goldman Sachs and the Foreign Economic Affairs Board. He will inform the investors regarding Turkey's legislative reforms as well as Turkey's plans for accession to the European Union and will give out the message that Turkey is worthy of investment and has an economic atmosphere which minimizes risks. Davutoğlu will announce the Middle-Term Economic Program and will explain Turkey's road map until 2018 to investors. Davutoğlu will also attend a lunch with CEOs and other executive managers of 18 of the most crucial global investment funds at Goldman Sach's European Headquarters. During the round-table meeting scheduled for Chatham House in London, Davutoğlu will be providing insight and express his views regarding regional and international events and developments.

Before flying to the U.K., Davutoğlu spoke at a press conference where he emphasized how Turkey must attract investments despite the liquidity conditions being relatively less favorable compared to the previous era. He also stressed that Turkey will be one of the winners of the competition, in which countries do their best to attract big investments. Davutoğlu added that the investments made in Turkey until now have been insufficient and are lower than Turkey could potentially attract. Particularly in London, throughout the general meetings and bilateral negotiations, Davutoğlu will express that despite the chaotic atmosphere in the Middle East, long-term investments in Turkey will continue to bring high returns.

Following his visit to London, Davutoğlu will meet private investors in Davos to draw their attention toward profitable investments to be made in appropriate sectors in Turkey. After Davos, Davutoğlu will visit Berlin, where he will continue to present Turkey as a safe haven for investments.

Davutoğlu touched upon the so-called 'Fourth Industrial Revolution,' which aims to make Turkey a producer of high-tech and value-added manufacturing goods, saying that through the Research and Development incentive plan announced on Thursday, Turkey will see a big leap forward in industry. Davutoğlu also expressed that with the participation of academics and the business world during his visit to Europe, he will present Turkey's real growth potential in the medium-term, which will enhance investors' confidence.

Meanwhile, on Thursday, the government announced the R&D package aiming to increase the R&D expenditures of the ratio of gross domestic product (GDP) to 3 percent from 1 percent. This is one of their 2023 goals, the year when the Turkish Republic celebrates its 100th anniversary. Moreover, during a launch event organized by the Scientific and Technological Research Council of Turkey (TÜBİTAK), the government shared details about the R&D reform package. Accordingly, the government will more extensively support R&D as well as design activities. Another goal is to increase R&D investments and take more concrete steps toward the production of higher value-added goods as well as the measures to commercialize these scientific and industrial activities. Moreover, the government aims to enhance the collaboration between universities and industry.

According to the R&D reform package announced by Davutoğlu, it will be easier for firms to access the R&D incentive since the minimum obligatory number of workers at a firm willing to benefit from the incentive will be reduced to 15 from 30. Additionally, a certain amount of the salaries - the corresponding amount is the minimum wage - of the employees working in R&D centers will be financed by the government for the next two years. These firms will also be exempted from taxes including the income tax. The government will additionally support the firms engaged in R&D activities by granting them 50 percent of the cost of the machinery and equipment to be used. The goods imported from abroad for R&D and design projects will be able to benefit from a customs tax exemption as well. Also, the number of days during which the R&D and design centers' employees are abroad will be included in the scope of the tax exemption. The support limit for entrepreneurial ventures focused on technology will be increased to TL 500,000 ($165,161) from TL 100,000. Likewise, the condition for such entrepreneurs that required them to apply for this support within no more than five years after graduation will be amended, allowing them to apply within 10 years of graduation. Moreover, the academics who are involved in university-industry collaborations will be exempted from the income tax, which would be cut from the revenue they receive from their collaborative works.
RELATED TOPICS