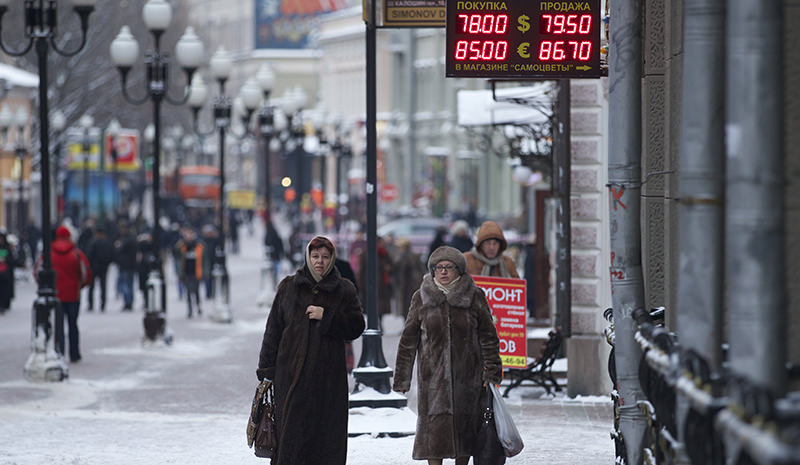 People walk at a street passing an exchange booth in Moscow, Russia, Monday, Jan. 18, 2016 (AP Photo)
by Associated Press Jan 18, 2016 12:00 am
The Russian ruble, battered by weak oil prices, on Monday dropped to new low and broke an all-time record against the euro.

The ruble fell to an all-time low against the euro as the Central Bank set the official exchange rate at over 85 rubles to the euro on Monday.

Oil, the mainstay of the Russian economy, recently plummeted to under $30 a barrel, a 13-year low. The ruble is also under pressure from economic sanctions that the West imposed on Russia for its involvement in the Ukraine crisis.

Russia is running a budget deficit of 3 percent of GDP this year, and the government is looking to cut 10 percent from the federal budget which was drafted with oil prices of $50 a barrel in mind.

All Russian ministries are expected to present their proposed cuts by the end of the months with a view of cutting 500 billion rubles ($6.3 billion) in government expenses, Finance Minister Anton Siluanov said.

Prime Minister Dmitry Medvedev, in televised comments on Monday, said that the government finds the price of oil "difficult to predict" and that Russia should use this moment to diversify its economy away from oil since it "has got a chance now to do it as quickly as possible."
Last Update: Jan 18, 2016 4:54 pm
RELATED TOPICS