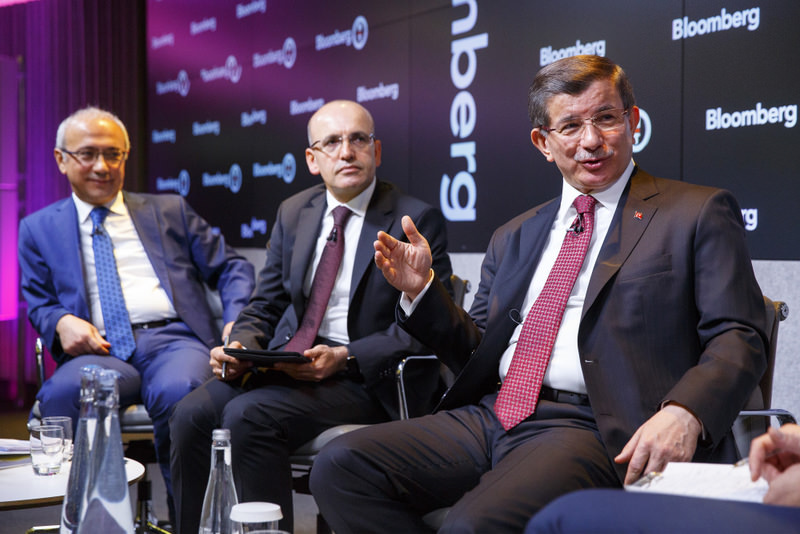 Prime Minister Davutoğlu started his one-week ‘investment tour' in London on Monday, where he invited leading investors to come to Turkey. The slowdown in developing countries and the volatility in financial markets were also points that Davutoğlu stressed

Prime Minister Ahmet Davutoğlu met with 200 leading investors at Bloomberg's London office on Monday, where he informed investors of Turkey's legislative reforms as well as the country's plans for accession to the European Union, sending the message that Turkey is worthy of investment and has an economic atmosphere which minimizes risks.

Highligting the strong points of the country's economy such as its strong fiscal structure, the prime minister also noted that Turkey was adversely affected by both the volatility in the global finance markets as well as the slowdown of the economies of developing countries; noting that the fight against inflation is therefore ongoing. According to Davutoğlu, the pressures on the Turkish economy are mainly due to the volatility that affects all economies and the slowdown of economic growth in developing countries. He also included geopolitical risks – such as the intensifying clashes in Syria – as the third reason.

"No country is isolated from global economic trends," Davutoğlu added. Addressing the country's high inflation due to the sharp devaluation of the Turkish lira and rising food prices, Davutoğlu noted that implementation of the government's anti-inflation policies will continue and positive developments in relations with the European Union are crucial for speeding up the implementation of these reforms.

Speaking to investors in London, Davutoğlu stated that the victory of the ruling Justice and Development Party (AK Party) in the Nov. 1 elections has given them the power to implement structural reforms while striving to ensure that strong economic growth continues. After making a successful economic transition by jumping from the lower-middle income bracket to high-middle income bracket and simultaneously improving Turkey's income per capita, resulting in a 48 percent increase in the last 10 years, the country's businessmen and economists are now hoping to usher a new phase in economic reforms. The country's income per capita is around $10,500; whereas, the economic targets are eyeing much higher levels. The government aims to reach $25,000 in income per capita by 2023, which is the 100th anniversary of the Republic of Turkey. Although there have been disagreements on the best way to reach the top, all sides, including political parties, economists, global organizations and businessmen agree that the country needs structural reforms to reach its next goal.

Davutoğlu divided the structural reform plan into three dimensions, explaining to investors that these dimensions include regulations that will enhance the investment environment. While the first stage involves sectoral transformation, the second stage depends on structural-macro reforms and the third stage includes the EU membership process on the reform agenda.

Turkey is not only working on reforms, but is also turning to its logistic hub via infrastructural investments which include new airports and harbors, according to Davutoğlu. He mentioned that a connection of fast train lines from Pekin to London will be enabled along with the Marmara Eurasia Tunnel - as well as connections with airways and ports which have been established.

"We are now building the biggest airport in the world. I'd recommend looking at the airports of one country to understand its economy; if it's airports are dynamic, then, its economy is dynamic," said Davutoğlu, adding that with the unveiling of the Eurasia Tunnel, Istanbul will become the heart of various modes of transportation. He also stated that the biggest port in the Mediterranean Sea is currently being built in Filyos - a province of İzmir - and the government has further projects that will connect both the East-West corridor and the North-South corridors in the Black Sea.

The Turkish Prime Minister referred to the "fight against the shadow economy and the increase of domestic savings" as the most important items on the package of reforms on the agenda, highlighting the importance the Research and Development packages place on increasing productivity, strengthening capital markets, increasing flexibility of the labor market, improving basic and professional skills, quality human resources and the quality of information processing through public purchasing.

Davutoğlu stated that Turkey is the sixth most important city for health care in the world, with a fully functioning, state-of-the-art health care system that is currently undergoing a qualitative change to increase its mobility while ensuring the transformation of deliviery methods and logistics.
Last Update: Jan 19, 2016 11:39 am
RELATED TOPICS