Foreign direct investment inflow to Russia down 92 pct in 2015 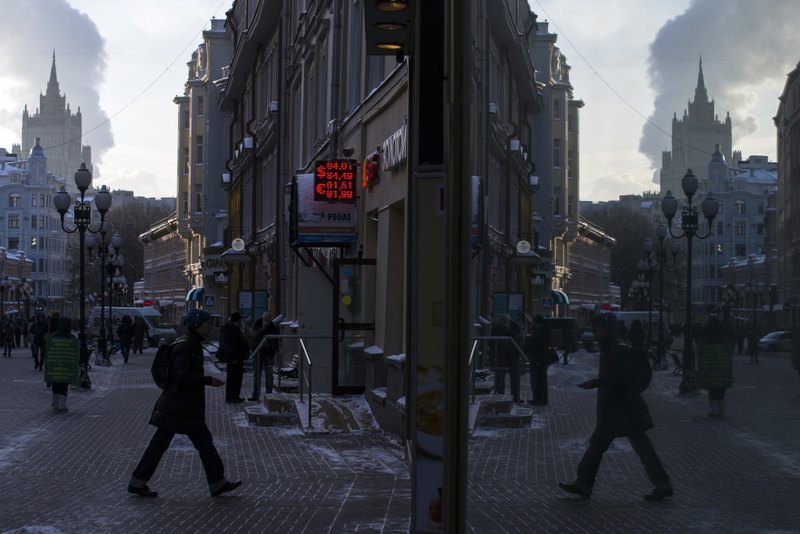 Currency exchange rates are illuminated at an exchange office as the street is reflected on a shop window in downtown Moscow. (AP Photo)
by Daily Sabah with Wires
Jan 23, 2016 12:00 am

While the world's foreign direct investment (FDI) increased 36 percent in 2015, Russia recorded a 92 percent decline in FDI. The energy-dependent Russian economy is struggling more due to the value loss of its currency

The energy-dependent Russian economy has been adversely affected by the decreasing trend in oil prices since June 2014 and the Western sanctions imposed on the country because of the Ukraine conflict. A top Russian official says his country needs to work fast to diversify the oil-dependent economy amid new trouble for the ruble and a bleak outlook for the year.   Deputy Prime Minister Yuri Trutnev also expressed hope for greater understanding from the West. "This is the responsibility of the government to enact reforms quickly to diversify the Russian economy and to replace the diminishing income from oil prices," Trutnev said Friday at the World Economic Forum in the Swiss resort of Davos. He said he hopes Russia boosts domestic production and builds "the foundation for a new economy" in the coming two or three years. Despite current East-West tensions, former Finance Minister Alexei Kudrin said Russia should be a part of Western institutions such as the Group of Seven and the OECD. He said low oil prices "reshaped our reality" and predicted a risky 2016 for the Russian economy.  Russia's Central Bank chief was supposed to head the Russian delegation at the Davos gathering of business and political leaders, but pulled out at the last minute as the ruble hit historic lows.

Russia's battered ruble bounced back on Friday after a rise in crude prices, recovering ground a day after it slumped to an all-time low against the dollar.  The Russian currency stood at 80.28 against the dollar, up from Thursday's 82.63 ruble to the greenback, as oil prices rose from 12-year lows. The country's RTS dollar-denominated index meanwhile was up 5.67 percent at 0720 GMT.  Earlier this week, the ruble fell to a record low against the dollar, dipping below the 85-ruble mark and standing at 93 against the euro.  Russia -- whose energy-reliant economy has already been pushed into recession by low oil prices and Western sanctions over Ukraine -- has been rocked by low oil prices. But the slight recovery of the oil market on Thursday did not immediately increase the ruble's value, causing "nervousness" among authorities, the Kommersant daily reported.  The Central Bank on Thursday summoned bank chiefs for an unexpected late-night meeting. Central Bank chief Elvira Nabiullina has cancelled her trip to the Davos economic forum, where she was set to speak on Friday.

Russia's central bank chief said on Friday the authorities have all the tools needed to ward off instability as she sought to calm markets after a rollercoaster week that saw the ruble hit a new low against the dollar. "We have all the means to be proactive and prevent threats to financial stability in advance," Nabiullina was quoted as saying by the RIA Novosti news agency at a finance ministry meeting, insisting the bank was "closely following the situation on the market."  The government, which is facing increasing pressure to assuage the country's economic woes, said Friday that it was preparing an anti-crisis plan. Authorities have already admitted that tumbling oil prices will have to see them slash government spending, as they struggle to keep the deficit under 3 percent of gross domestic product (GDP). The plan, according to business daily RBK, would include measures to support the most fragile sectors of the economy and could cost 420 billion rubles ($5.1 billion). Last month, Russian Finance Minister Anton Siluanov said that his government faces a debt of around $90 billion to $100 billion because of falling oil prices.