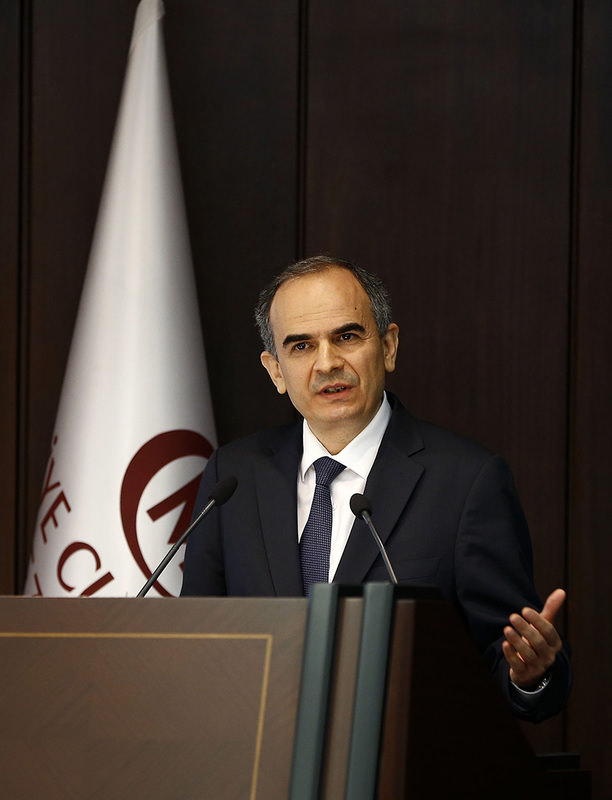 by daily sabah Jan 26, 2016 12:00 am
The Central Bank of the Republic of Turkey (CBRT) increased its inflation prediction for 2016 by one base point from 6.5 percent to 7.5 percent, CBRT Governor Erdem Başçı announced on Tuesday in capital Ankara. The CBRT's inflation target for 2016 now matches the expectation of the Medium-Term Economic Program prepared by the government.

In the inflation report previously announced on Oct. 28, 2015, the CBRT predicted that the inflation rate for 2016 would hover between 5 and 8 percent. Başçı said that they will employ all CBRT policy measures to keep this year's target, and will initially focus on keeping inflation rates below double digits in the beginning of the year. He added that the CBRT decreased its oil prices prediction for 2016 from $54 per barrel to $37 per barrel on average, pulling up its food-price-hike prediction from 8 percent to 9 percent.

While attending the 46th World Economic Forum (WEF) in Davos, Switzerland, Başçı said ahead of the first meeting on the 2016 inflation outlook that the CBRT will fight rising inflation again this year. Moreover, he stressed that they will have to convince everyone that, according to the Medium-Term Program regarding inflation, the targeted rate is 7.5 percent for the end of this year, 6 percent for next year and 5 percent in 2018.

In addition, during the press conference, Başçı addressed monetary simplification, saying: "Can we adopt one interest rate? Should we? The answer is not yet because this wide interest corridor helped us tremendously during periods of high global volatility." Furthermore, Başçı said it is better to adopt the "wait-and-see" policy until global volatility and the risks involved in the process become more definable and steady.

Furthermore, regarding achieving the inflation target, Başçı emphasized the importance of collective efforts, suggesting that taking steps that are in harmony with the government's plans is tantamount to supporting the long-term goals of the economy.

Answering questions from the press, Başçı made general comments about the policy stance of the CBRT as well as its ability to manipulate inflation rates. "At the end of the year, we should manage to stay below the 7.5 percent inflation rate since, if we cannot succeed in putting downward pressure on the inflation rate, the equilibrium in the economy will worsen. [Currently,] the monetary policy is sufficiently tight … the 3-percent decline in commodity prices can put downward pressure on inflation even if the Turkish lira loses some of its value. We need to use all kinds of tools that would potentially help reduce inflation and, in our aims to decrease the effects of shocks on the economy, we are determined about it," he said.
Last Update: Jan 27, 2016 6:24 pm
RELATED TOPICS