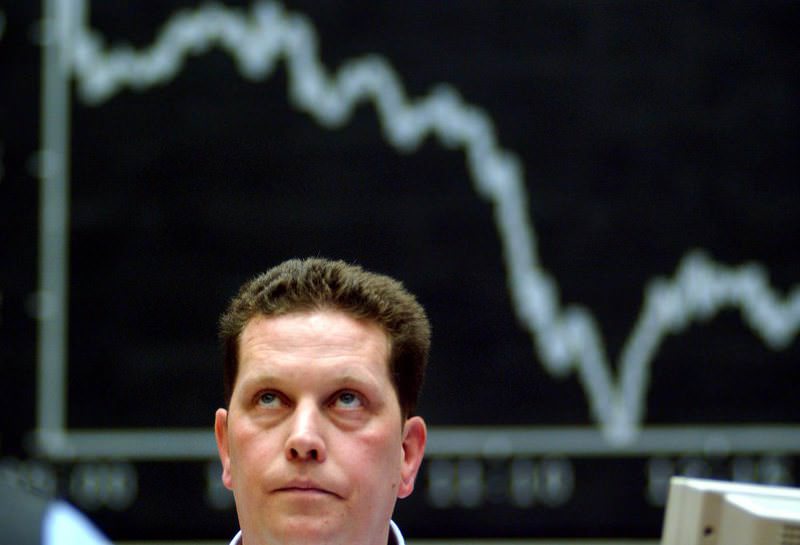 A trader looks up at the electronic board showing the DAX index at the Frankfurt Stock Exchange, Frankfurt, Germany.
by Associated Press Feb 04, 2016 12:00 am

The eurozone economy is growing at a modest pace of 0.4 percent quarterly, signaling that the bad financial data in January is starting to be reflected in business activity

The economic recovery in the 19-country eurozone lost steam in January, a closely watched survey found yesterday, a sign that the turmoil in global financial markets is beginning to weigh on business activity. Financial information company Markit said its purchasing managers' index a broad gauge of activity across both the manufacturing and services sectors fell to a four-month low of 53.6 points in January from 54.3 the previous month.

According to Markit, that means the region has started off the year growing at a modest 0.4 percent quarterly tick. Rates of growth also diverged, with Spain once again leading the pack, followed by Germany. France appears to be stagnating. Though the index remains above the 50-point threshold that indicates expansion, the survey found evidence that business activity, orders and employment are all losing momentum. The survey also noted a bigger drag on prices despite the stimulus measures the European Central Bank has pursued over the past year to push them higher.

"Growth and inflation have clearly failed to pick up over the past year despite the renewed stimulus efforts from the ECB," said Chris Williamson, Markit's chief economist. "This raises the question of whether existing stimulus has simply been insufficient, or whether monetary policy is proving ineffective." It's a difficult question to answer as the eurozone, like all economies, has had to contend with extreme volatility in financial markets. Fear of a sharp slowdown in China's economy has been the main cause of that volatility, which has seen oil prices tank.

The fall in oil prices has in one way worked against the ECB's stimulus efforts, which involve super-low and even negative interest rates and large-scale bond purchases, by reducing prices at the pump and domestic energy bills. While that should help consumers, it also weighs on expectations for overall price increases, which an economy needs some of to remain healthy, not least as it helps businesses generate profits. The ECB's main aim is to get consumer price inflation back toward the target of just below 2 percent. In the year to January, it stood at a paltry 0.4 percent.

Analysts think the ECB could add to its stimulus program, which currently entails 60 billion euros ($65 billion) in monthly bond purchases through at least March 2017 effectively pumping new money into the economy. It could also cut the rate on the deposits it takes from commercial banks from its current rate of minus 0.3 percent. The negative rate is aimed at pushing banks to lend money rather than hoarding it.

Though in theory the fall in oil prices should buoy consumer spending, it doesn't appear to be really happening in the eurozone. Separate figures from Eurostat, the European Union's statistics agency, showed retail sales up a modest 0.3 percent in December. Though that's the highest monthly increase since July, it's not as much as many economists had been predicting and unlikely to stoke the inflation the ECB desires.

Several reasons have been cited for the consumer caution, not least uncertainty over the future. Many households across the eurozone are also said to be rebuilding their savings after the battering they took over the past few crisis-ridden years.
RELATED TOPICS