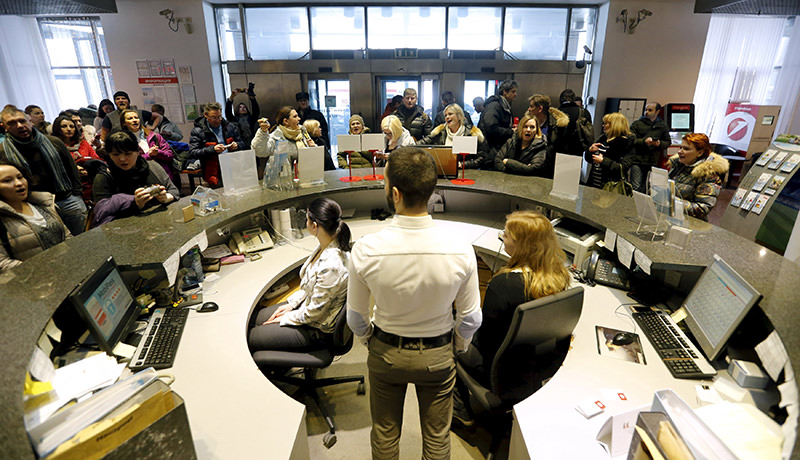 People, who had taken out mortgages denominated in foreign currencies, shout slogans during a protest at the UniCredit bank in Moscow, Russia, in this January 28, 2016 file photo (Reuters Photo)
by Feb 08, 2016 12:00 am
Russia's central bank said Monday it had revoked the licenses of two more banks as part of government efforts to consolidate the sector as economic troubles mount.

Russia's 67th lender by assets, Intercommerz had failed to adequately assess risks despite the poor quality of its assets, the central bank said.

"At the same time the bank was involved in dubious transactions," it added.

The Bank of Russia also said it had revoked the license of a smaller lender, Alta-Bank.

The country's 186th bank by assets, Alta-Bank had failed to meet its obligations to creditors, the central bank said.

The Russian authorities have been trying to clear the banking sector of hundreds of fragile banks which are often found to employ doubtful or illegal practices.

The ruble's recent fall has exacerbated this, leading to dozens of bankruptcies in the sector.

The central bank said it withdrew Vneshprombank's licence because of its financial difficulties and involvement in money-laundering.
Last Update: Feb 08, 2016 11:50 am
RELATED TOPICS