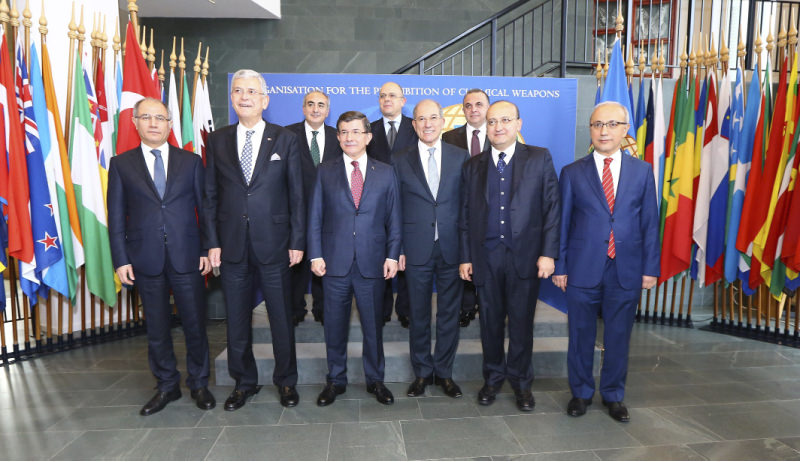 Prime Minister Davutou011flu (L3) promised the businesspeople in attendance a future where they will deal with less bureaucracy.
by Daily Sabah Feb 11, 2016 12:00 am

Stressing that Turkey is among the most attractive countries for global investors, Prime Minister Davutoğlu said Turkey is focusing on structural reforms as well as research and development

Prime Minister Ahmet Davutoğlu, speaking yesterday at the Investor Forum in The Hague, the Netherlands, where a great number of businesspeople and investors were in attendance said: "The total amount of investment by Turkish firms in the Netherlands has reached $9 billion. The situation has been win-win so far, but we want to change it into an even bigger win-win situation. He also highlighted that Turkey is one of the safest and most reliable countries for investment. Stressing that the government announced its reform program on Dec. 10, 2015, Davutoğlu said foreign investors requested greater market flexibility and in response, the government presented a draft law.

"One of these reforms, maybe the first one, regards transparency and fighting corruption, fortifying and increasing business ethics, honesty and accountability in the public sector, and improving the Public Tender Act. The second reform regards improving the labor market by providing a flexible working environment and creating new regulations regarding severance pay," Davutoğlu said, emphasizing the importance of structural reforms.

Adding that a new regulation was sent to Parliament meant to stimulate research and development (R&D) by enacting a patent law, Davutoğlu said work has been in progress to support small and middle-size firms producing high technology.

Promising the businesspeople in attendance a future where they will deal with less bureaucracy, Davutoğlu talked about the modern system of arbitration and specialized courtrooms as well. Highlighting that there have been no problems between the two countries for centuries, Davutoğlu gladly spoke out about his fulfillment about the Netherlands interest in investing in Turkey. "For us, this is not just an indication of friendship, but also the sign of the Netherlands interest. A total of 2,490 Dutch firms are currently operating in Turkey and the Netherlands invested $21 billion in Turkey between 2002 and 2015," he said.

According to Davutoğlu, 2015 was not an easy year for Turkey, and political and economic success was only managed toward the end of the year. With the election on Nov. 1, a consistent government was formed with 49.5 percent of the electorate supporting it. "Regardless of the surrounding geopolitical challenges, Turkey is a safe haven. Despite the challenges, the economy has grown 4 percent. Economic growth was recorded as 5.4 percent between 2010 and 2015. Turkey is the fastest-growing country among Organization for Economic Co-operation and Development (OECD) countries. This indicates the dynamic and stable economic character of Turkey," Davutoğlu said. He also emphasized that there would be no election in the next four years.

Stressing that Turkey was a country of low- and middle-income when the ruling Justice and Development Party (AK Party) came to power in the early 2000s, Davutoğlu said it has now become a middle- and high-income country, and their target is to make Turkey a high-income country.

Touching on energy market reform, Davutoğlu mentioned that they have been working to liberate the market, facilitate licensing and permissions, provide tax incentives and increase energy efficiency. Regarding Turkey's positive economic and political performance, Davutoğlu said: "This is not enough for us. We want to be ranked among the top 10 economies in the world. We need more reforms, more dynamism and more qualitative transformation and change."

Davutoğlu said Turkey is open for direct capital inflow, and emphasized that they constantly take the country's economic fragility and geopolitical location into consideration. "We want Istanbul to become a center for transportation. Two weeks ago, Istanbul became the third busiest airport hub in Europe, following London and Paris, in terms of the total number of passengers served. Of course, this is not enough for us. In the next four years, Turkey will have the biggest airport in the world with an annual capacity of 150 million passengers," Davutoğlu said, adding that they want to see Turkey rise as a financial center.

According to Davutoğlu, all the statistics indicate Istanbul has a chance to become one of the world's "global cities."

Indicating that Turkish Airlines flies to 283 destinations around the world, he said: "You will not have problems changing planes; you will be able to directly fly to Istanbul. I was in Kazakhstan last week discussing the Silk Road railway line. We are talking about a line that will run from China to Kazakhstan, on to Baku then Georgia, and from there, through Europe to London via the Marmaray. When we complete the Baku-Tbilisi-Kars railway line, we will construct the modern version of the Silk Road. We have many plans regarding high-speed trains. All the highways, railways and airline routes will soon converge in Istanbul. And as the Romans said during their powerful era: 'All roads lead to Istanbul,'" Davutoğlu added.