TL up against dollar after Fed decision 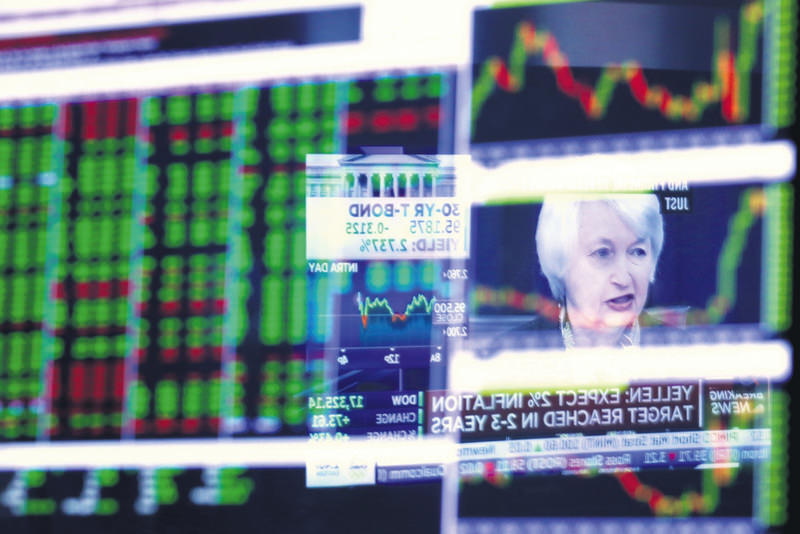 Following the Federal Reserve's expression of a relatively more conservative stance toward possible rate hikes throughout the year, the dollar weakened remarkably as well as evoking the risk appetite in global markets

The dollar tumbled on Thursday, lifting world shares to their highest level of the year, after the Federal Reserve scaled down its own expectations of the number of U.S. rate hikes likely over the next nine months. Following the United States Federal Reserve's (Fed) decision regarding interest rates, the dollar has reached 2.8435 against the Turkish lira, the lowest level in the past four months. The appetite for taking risks in the monetary markets has increased due to the fact that the Fed has not amended the interest rates, decreased the expected increase in the interest rates from 4 percent to 2 percent and made dovish statements. The currencies of developing countries have also raised their value against the lira. According to analysts, the technical levels in dollar indicate that the optimistic prices in lira will continue, and as long as the dollar-lira exchange rate stays under 2.86, downward movement will continue.

Also, the Malaysian ringgit, Indonesian rupiah and South Korean won all rose more than 1 percent against the dollar as a clutch of Asian currencies hit multi-month peaks.

"In the past, when the dollar weakened after the Fed was dovish, the dollar weakness lasted for maybe about three to four months," said Tan Teck Leng, FX strategist for UBS chief investment office Wealth Management in Singapore. "But is this the end of the strong dollar? We don't think so," he said, adding that the Fed could start sounding hawkish again around June and July to pave the way for a rate rise, possibly in September.

MSCI's broadest index of Asia-Pacific shares outside Japan climbed to a two-month high as Australian stocks added 1 percent, South Korea's Kospi rose 0.9 percent and Shanghai was up 1 percent. The jump in the yen meant Japan's Nikkei lost out though, as it closed down 0.2 percent.

World growth concerns, particularly regarding China, have rattled markets through much of this year, and this was seen to have influenced the Fed's shift in position as it cited the "global risks" facing the U.S. economy.

The dollar index slipped to a one-month low of 95.038 as European trading settled, and the euro was eyeing $1.13 for the first time since mid-January as the dollar also slid below 112 yen. Commodity-linked currencies rose strongly as products such as oil and iron ore soared after the Fed's decision.

The Australian dollar, which had already jumped 1.2 percent overnight, caught a fresh lift from an upbeat local jobs report and rose to an eight-month high of $0.7620.

The Canadian dollar was firm at just under C$1.30 to the U.S. dollar after rallying nearly 2 percent to a four-month peak of C$1.3094 overnight.

The Fed, via its 'dot plot' system, which charts what rate moves policymakers expect, effectively chopped those forecasts in half, from four hikes to two for the year.

It was a signal that triggered a slump in the dollar and a surge in risk appetite that rolled from Wall Street to Asia and then into Europe, where London, Frankfurt and Paris opened 0.5 to 0.8 percent higher and bond yields fell. Commodity markets cheered too. Brent oil jumped over $41 a barrel as a number of large producers also nailed down a date for an output freeze meeting. Industrial metals such s copper saw their biggest rise in two weeks. But it was the currency markets that really grabbed the attention as the dollar sank to one-month and three-week lows against the euro and yen, and emerging market and oil and commodity-linked currencies surged. "Risk is thoroughly on," said Societe Generale global head of currency strategy Kit Juckes. "All the chit chat was that they (the Fed) were going to be hawkish, and they weren't." "The dollar is obviously the loser, but it's good for shares, it's good for oil, and good for debt too, I would say."

Europe's solid start saw MSCI's 46-country All World share index climb over 1 percent on the day to reach its highest since Jan 4. the opening trading day for most major markets of the year.

For emerging markets, the news was even better, as a more than 2 percent surge took the volatile asset class's stocks to their highest since mid-December as currencies and debt rallied too. One outlier was South Africa, though, ahead of a meeting of its central bank after another week in which the rand has been hammered by political worries.

U.S. crude oil rose to a three-month peak of $39.54 a barrel after surging nearly 6 percent overnight. Brent was up 95 cents at $41.27 a barrel. Three-month copper on the London Metal Exchange traded up 1.5 percent at $5,065 a tonne. A weaker greenback tends to favour commodities traded in dollars by making them cheaper for non-U.S. buyers.

"Turkey has this opportunity. Especially a decrease in the upper band, which accounts for overnight repo rates, in other words interest for financing the banking sector, is a possibility," said Ertem. The CBRT will be announcing its decision on interest rates on March 24. Currently the overnight repo rate is around 7.5 percent, while the lower band of the interest corridor is 7.25 percent and the upper band is around 10.75 percent.