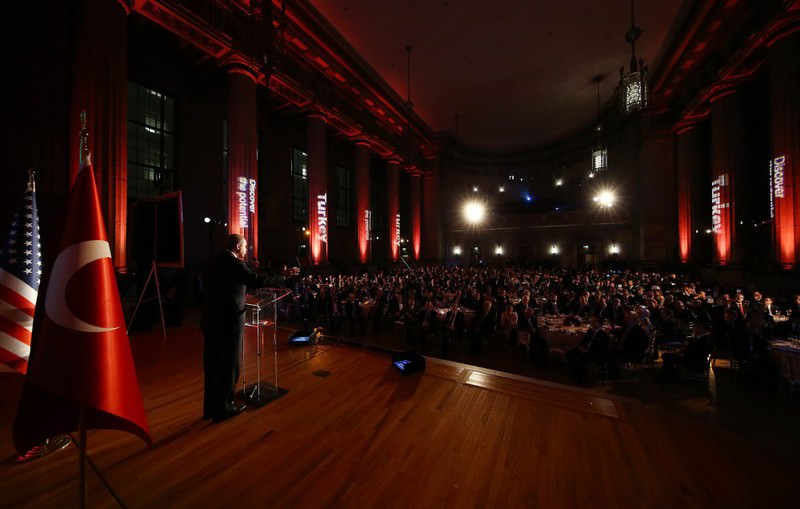 Addressing a group of Turkish and American businessmen at a DEİK conference in Washington D.C., President Erdoğan called for a major boost on commercial ties, and pledged state support to foreign investors moving into Turkey

On the second day of his visit to the United States, President Recep Tayyip Erdoğan met with leading representatives from the Turkish-American business world at a conference organized by Turkey's Foreign Economic Relations Board (DEİK). Calling on American businesspeople to invest in Turkey, President Erdoğan said: "There is no businessperson who has been exposed to illegal implementations and had difficulty saving the money they have earned after investing in our country." Erdoğan stressed the fact that Turkish businesspeople needed to get more share from the U.S. market, encouraging them to think big, make solid medium- and long-term plans, establish partnerships and take their commercial network overseas.

Erdoğan flew to the U.S. for a five-day trip to attend the Nuclear Security Summit in Washington where he met with CEOs and chairmen from some of the biggest companies in the world, including countries from the Fortune 100, on Wednesday night. President Erdoğan came together with Muhtar Kent, the CEO of Coca Cola; Marillyn A. Hewson, the board director and CEO of aviation giant Lockheed Martin; David S. Taylor, the CEO of Procter & Gamble; Raymond L. Conner, the chairman and CEO of Boeing Commercial Airplanes; and Michael O'Neill, the chairman of Citibank; separately at a smaller meeting in the Andrew Mellon Auditorium followed by meetings with the representatives of 20 U.S.-based world giants. He later addressed Turkish businesspeople including Kalyon Group Board Chairman Cemal Kalyoncu, Doğuş Holding Board Chairman Ferit Şahenk, Zorlu Holding Board Chairman Ahmet Nazif Zorlu as well as American businesspeople. Stressing the strong alliance and partnership between Turkey and the U.S., Erdoğan said that the country aims to harmonize the economic dimension and political level of Turkey's relations with the U.S.

According to President Erdoğan, it is not possible to say that the economic and commercial potential between the two countries have been fully implemented. So, in order to overcome this deficiency, Erdoğan held meetings with the representatives of prominent companies in the U.S. separately as well as the representatives of nearly 20 companies. Indicating the great expectations from Turkish entrepreneurs, Erdoğan stressed the importance of their efforts in order to take economic, commercial and investor relations between the two great G20 member-countries up to the level they deserve.

Turkey's 2015 trade volume with the U.S. is on a decline, maintaining its level of $17.5 billion. According to Erdoğan, the fact that Turkey's trade volume with the European Union is $150 billion and staying below $20 billion with the U.S. is not satisfactory. Turkey is not even one of America's top 20 trading partners; whereas, America is ranked Turkey's seventh trade partner. Considering investments, the current situation is not enough despite American companies' growing interest in Turkey. The largest amount of direct investment from the U.S. to Turkey was made in 2015 over the past eight years. Turkey's direct investment in the U.S. also increased in 2015 compared to the previous year. Suggesting that the aforementioned factors were surely positive developments, Erdoğan said that American and Turkish companies could do better and do more. With ultra-performance and stable structure in the field of economy, Turkey is one of the most important investment centers in the world and one of the few among its surrounding countries which is able to be the strong and stable country whose qualities investors look for.

During the meeting, Erdoğan also suggested that Turkish investors are cautiously approaching the American market for various reasons such as geographical distance, competitive atmosphere, differences regarding legislation, and the way of doing business. He said that it was not possible to brand or obtain competition power by staying away from the economic dynamics of one of the world's most important markets; and it was also unacceptable for a country with great goals to observe the world's biggest economy merely by financial data. Addressing Turkish investors, Erdoğan promised that the government would back them up at every stage of their investments.

Defining Turkey as a rapidly growing country seen as a primary market, Erdoğan said that he had spoke of the opportunities in Turkey with U.S. President Barack Obama whom he saw as a true friend as well as Secretary of Commerce Penny Pritzker, stressing the serious efforts by Turkey regarding the issue. Erdoğan also encouraged American investors to invest in Turkey by assuring them that their money would not stay in Turkey unlike the other parts of the world from which the investors could not take their money.

President Erdoğan also indicated that they did not want to be left out from the Transatlantic Trade and Investment Partnership (TTIP) agreement as negotiations are still continuing between the U.S. and EU.

The TTIP is a proposed free trade agreement between the European Union and the United States, and if the negotiations are successful, the TTIP has the potential to integrate two of the world's largest economies. The trade relationship between the U.S. and EU, which constitutes one-third of global trade, is the greatest trade partnership in the world with an approximate business volume of 2 billion euros per day.The agreement aims to cancel out the customs tariffs, which are already low in many sectors, between the two parties. More importantly, however, it aims to make sector regulations in the fields of security and environment mutually recognized and to remove non-tariff barriers to trade.

Turkey has been a party to a customs union with the EU since 1995, allowing goods into its borders. However, since Turkey is not a member of the EU, it is excluded from the talks. Turkish officials argue that future free trade agreements signed by the EU with other countries, such as the U.S., would effectively open Turkey's market to exports from these states. But it would also effectively block Turkish exports from benefiting from tax advantages in those same states should Ankara not be a party to the free trade deals negotiated by the EU. Turkey, which has been trying to become a member of the TTIP for a long time, will gain a significant position with the new Customs Union agreement.

The agreement does not only include the revival of the economic growth but it is also seen as a means to deepen the relationships between the U.S. and the E.U. on every level. Noting that with the enactment of the agreement -- despite the flow of American-based products freely into Turkey via the E.U. market -- Turkish-based products will not be able to benefit from the same privilege. Erdoğan said that Turkey aims to sign a free trade agreement with the U.S. alongside the E.U.; or, join this aforementioned agreement in order to prevent Turkey from encountering such an injustice.