Inflation in Turkey under government's year-end target of 7.5 percent 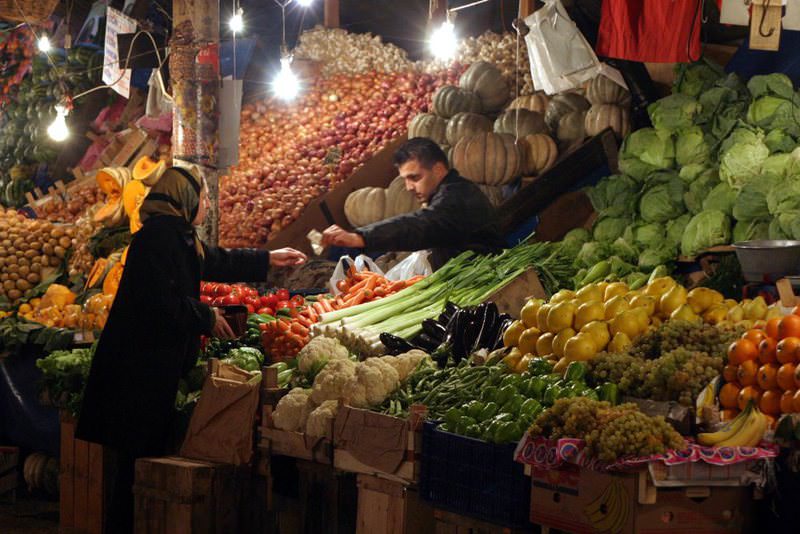 Thanks to a sharp decline in food prices and the Turkish lira gaining some of its value back, annual inflation decreased to 7.45 percent in March, which is close to the government's year-end target

The annual rate of inflation in Turkey fell to 7.46 percent last month due to a sharp drop in food prices, according to official data released yesterday by the Turkish Statistical Institute (TurkStat). So far in 2016, inflation has been following a path close to the 7.5-percent target set for this year by the government's Medium-Term Economic Program (MEP). Monthly inflation dropped 0.04 percent in March from the previous month, as February's rate stood at 8.78 percent.

The health sector saw the highest monthly increase for March, with a 1.84 percent rise, while the highest annual increase was the 12.79 percent recorded for the price of alcohol and tobacco products.

Regarding the progression of annual inflation, Development Minister Cevdet Yılmaz expressed that it is realistic to hit the target determined by the MEP, which aims at a 7.5 percent change in the overall price level for 2016. Yılmaz added that with stability of the TL / dollar exchange rate, oil prices fluctuating around $40 per barrel and the realizing of the estimates that food prices will see an annual increase of about 9 percent, all these will contribute to reaching the year-end target.

Deputy Prime Minister in charge of the economy Mehmet Şimşek described the fall in the annual rate as "positive" but warned that core inflation, which includes energy prices, still stood at around 9.5 percent.

Experts said the decrease would give the Central Bank of the Republic of Turkey (CBRT) more leeway in making cuts to interest rates. Atılım Murat, an associate professor at Union of Chambers and Commodity Exchanges of Turkey's (TOBB) University of Economics and Technology said low energy prices continued to favorably affect inflation in Turkey. "Energy prices will lower again and this will help Turkey to lower inflation, which is the country's biggest problem," he said. "In the coming months, it seems that inflation will get lower and lower. Next month, we will see lower inflation numbers because of base effects. This would lead to further interest rate cuts," he added.

ALB Securities analyst Enver Erkan identified food prices and foreign currency levels as two crucial factors in the economy. "But we see that core inflation remains way too high, compared to the headline because of the depreciation of the Turkish lira compared to last year," he said. "So, it means that other factors continue to affect inflation upwards. With the sharp decline in headline inflation, the [CBRT] may be encouraged to cut interest rates but the high core inflation level may limit the interest rate cut. The main risk is the additional depreciation of the lira but if food prices continue to get better and currency levels stay stable, inflation expectations might be revised downwards to 7.5 [percent] to 8 [percent] levels," he added.

Concerning the fight against inflation, the Central Bank of the Republic of Turkey (CRBT) pledged to continue to do its share in reducing inflation, as the fight against inflation requires "a collective effort." Accordingly last week CRBT Governor Erdem Başçı, who will leave office on April 19, stressed that all institutions must determinedly maintain the efforts that have been made in recent years in order to permanently keep inflation down to 5 percent. "Macro-prudential measures which are taken for prudential borrowing constitute a favorable ground for the anti-inflation struggle by contributing to the balanced growth," he told.