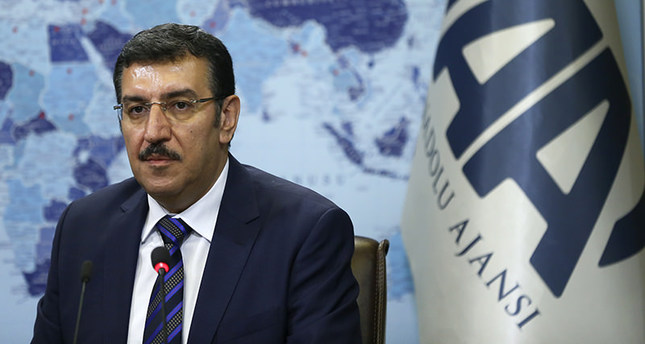 In remarks made at Anadolu Agency Editors' Desk, Tüfenkçi said: "We believe economic relations between Turkey and Iran will gain a significant momentum with the lifting of sanctions."

He said the Gurbulak-Bazargan customs gate between the two countries will be rebuilt.

In 2015, trade volume between the two sides reached $10 billion. According to the minister, the plan is to increase the volume to $30 billion level in the coming years.

About support for businesses in southeast Turkey, Tüfenkçi said the Turkish government is ready to offer support to shop owners in areas where an anti-PKK operation remains ongoing.

"Our aim is to reconstruct all shops destroyed in the operation," he said.

Meanwhile, Tüfenkçi also revealed government plans to send a new "check and suspension of bankruptcy" bill to parliament in the coming days.

A number of Turkish companies are said to be benefiting from a recent easing of bankruptcy regulations, which some unfairly use as a tool to melt down their debt stock.

The minister also said that narcotics and contraband worth 2.7 billion Turkish liras ($962 million) were seized during operations at Turkish customs in 2015.

"In the first quarter of 2016, contraband goods with a worth of 752 million lira ($267 million) were seized by the custom officials. Turkey is above the world average on catching contraband goods. Thanks to hard work by Turkish customs officials," he added.

Share on Facebook Share on Twitter
Previous in Economy Turkey's foreign trade deficit has fallen sharply for the seventh... Next in Economy Following the deep recession caused by the global financial crisis...
DAILY SABAH RECOMMENDS