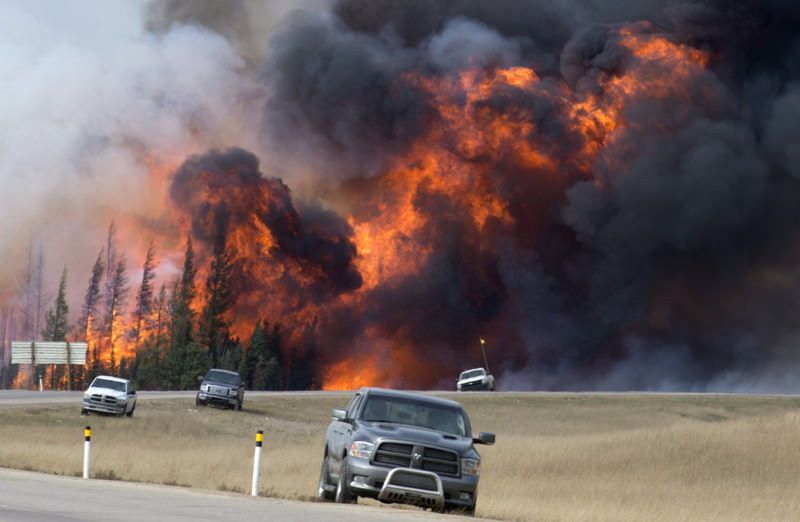 A huge wildfire ravaging the Canadian province of Alberta is expected to be the most expensive natural disaster in Canadian history. With authorities warning the blaze could continue to burn for months in the absence of major rainfall, economists predict that growth would stagnate in the second quarter.

A slew of oil companies in Alberta's oil sands region have suspended or considerably cut back their operations due to the inferno, evacuating employees as flames approached their facilities. In total, some 100,000 were forced to flee in and around the hard hit city of Fort McMurray, with thousands of oil industry workers among them.

The cut represents a third of Canada's overall production, analysts say. And that is bad news all around.

Over the past two years, oil companies hit by a dip in crude have laid off workers in large numbers and Alberta's economy, where the natural resources sector accounts for a third of GDP, has been plunged into recession. In April alone, 21,000 jobs were slashed and the unemployment rate is at 7.2 percent, twice what it was before the oil crisis.

The local government had planned on 1.4 billion Canadian dollars ($1.1 billion) in royalties from oil this year, down from CA$9 billion last year. Nationwide, the fallout from the fire is also expected to be bitter. Douglas Porter, chief economist at the Bank of Montreal, predicted that Canadian growth would stagnate. He had previously forecast growth of 1.5 percent. His latest prediction could still be revised downward, Porter cautioned.

"We have to reassess that view almost every week as we see exactly what the implication is for oil production," he told Agence France-Presse (AFP).

"At this point, we are assuming about two weeks or so of 1 million barrels per day being out of production," Porter added.

"It might end up being worse than this, that's for sure."

In April, the Bank of Canada revised its economic forecast upward, predicting that the Canadian economy would grow 1.7 percent in 2016 - an improvement from its 1.5 percent growth estimate in January. The insurance bill for the wildfire is also expected to be steep and could soar up to CA$9 billion. Oil companies operating in the region insist they will resume operations quickly once it was safe to do so.

Canada's Suncor, for one, said it had shut down its "operations in a controlled manner to facilitate a quick and reliable start-up." Last year, two fires in the region forced oil companies to stop 10 percent of production, but it was back up after two weeks. This time around, however, things could be different. "It's much more complicated than what we have seen in past fires," Porter said. "The big difference, this time, is that the entire work force has been evacuated."
RELATED TOPICS