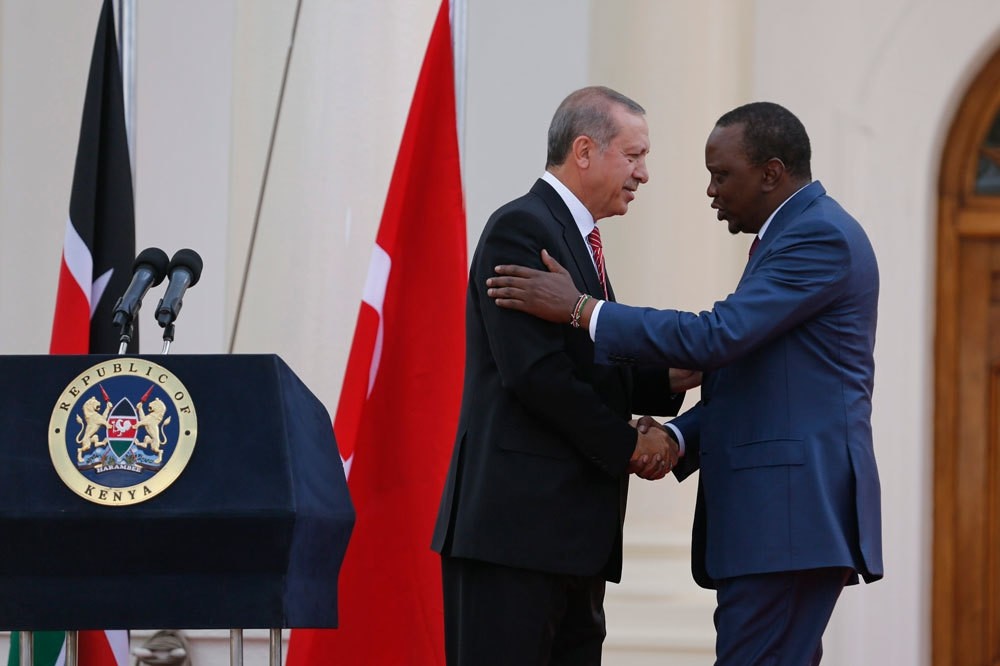 President Erdou011fan (L) shakes hands with Kenyatta at the end of their joint press conference at State House in Nairobi, Kenya. Erdou011fan & Turkish delegation were in Kenya to strengthen diplomatic & economic relations with the East African country.
by daily sabah Jun 03, 2016 12:00 am

In his two-nation East Africa visit, considering Kenya and Uganda's potential, Erdoğan said the outstanding trade volume of $144 million with Kenya is too low, adding that they will reach the $1 billion target as soon as possible

President Recep Tayyip Erdoğan and his Kenyan counterpart Uhuru Kenyatta held a joint press conference in Nairobi, the second stop on Turkey's two-nation East African tour, and Erdoğan said that Turkey and Kenya aim to raise the volume of trade from the outstanding $144 million to $1 billion a year. Erdoğan said the two countries have the potential to achieve this target.

Erdoğan is accompanied by a committee of 135 business people who came to Kenya ready to hold meetings on a sectoral basis with counterparts in the Business Forum, organized for the evening. Erdoğan said that to achieve the new trade volume target and achieve strategic partnerships in many fields including trade, energy, healthcare, education, infrastructure and superstructure projects, Turkey has given full support to eliminating all the barriers that prevent the fostering of business relations between the two countries. Erdoğan said the agreements on double taxation and preferential trade, which aims to eliminate the biggest hardships in conducting business, will be concluded in August through the visit of Kenyatta to Turkey. During the business forum, Erdoğan invited Kenyan businessmen to visit Turkey with their president.Erdoğan said Turkey will make efforts to further strengthen business ties, by creating opportunities for Turkish business people to invest in Kenya, such as the Build-Operate and Transfer (BOT) business model, which will result in the increase and sustainability of investments. He added that the Turkish Export-Import Bank (Eximbank) will provide business people with the necessary credit and incentives to invest, in the East African region generally and in Kenya specifically. He believes that Turkey will contribute to the development of Kenya through the sharing of experience and know-how to spur investment in superstructure and infrastructure development in Kenya.

While further enhancing cooperation in the fields of health, education and railway systems, Erdoğan said the two countries can engage in strategic partnerships in energy as well. Erdoğan reiterated the importance of the business forum, which will give way to the sharing of ideas between the business people from the two countries, adding that Turkey is also willing to increase tourism-based relations with Kenya.Recalling that Turkish Airlines, Turkey's national flag carrier, is the airline that has the most flights to the most amount of destinations in the world, Erdoğan said that Turkish Airlines will increase investment, and that targeting more destinations in Kenya will contribute significantly to the development of both business relations and the cultural exchange among the two countries.

Erdoğan said that Turkey is always willing to adopt a business model based on mutual respect and a win-win partnership, adding that Turkey is granting Kenya tractors with the aim of helping the country to realize urban development, as well as advancing Kenyan agriculture to use more modern and efficient methods. He stressed that Turkey, as a country hosting more than 3.5 million refugees, will do its best to help both Kenya and East Africa to develop, and is engaging in strategic partnerships with countries in the region, such as Somalia, in which Turkey has made significant contributions to resurrect over the past five years.

Erdoğan said Turkey strongly believes in a bright future for Kenya as well as Africa generally, adding that he hopes his visit will mark a turning point in the relations between the two countries.

Although Turkey is currently not among Kenya's major trade partners, trade volume between the two countries has tripled over the last 10 years, from $52 million in 2005 to more than $144 million in 2015.

Through Erdoğan's visit, an increase in trade volume is expected to gain further momentum. Turkey's exports to Kenya in 2015 totaled more than $130 million. The top five export categories for 2015 were hygienic products, some motor vehicle parts and tractors. Turkey imported goods from Kenya worth more than $10 million, ranging from coffee to crude animal and vegetables. During the press conference, a Kenyan journalist asked Erdoğan whether Turkey will continue to buy only coffee and some agricultural products from Kenya, as they will be seeking to reach the $1 billion trade volume target from now on. Erdoğan said if the double taxation agreement, which will reduce taxation costs for tradesmen, and the preferential trade agreement come into force after August, he believes diversification will be possible.
RELATED TOPICS