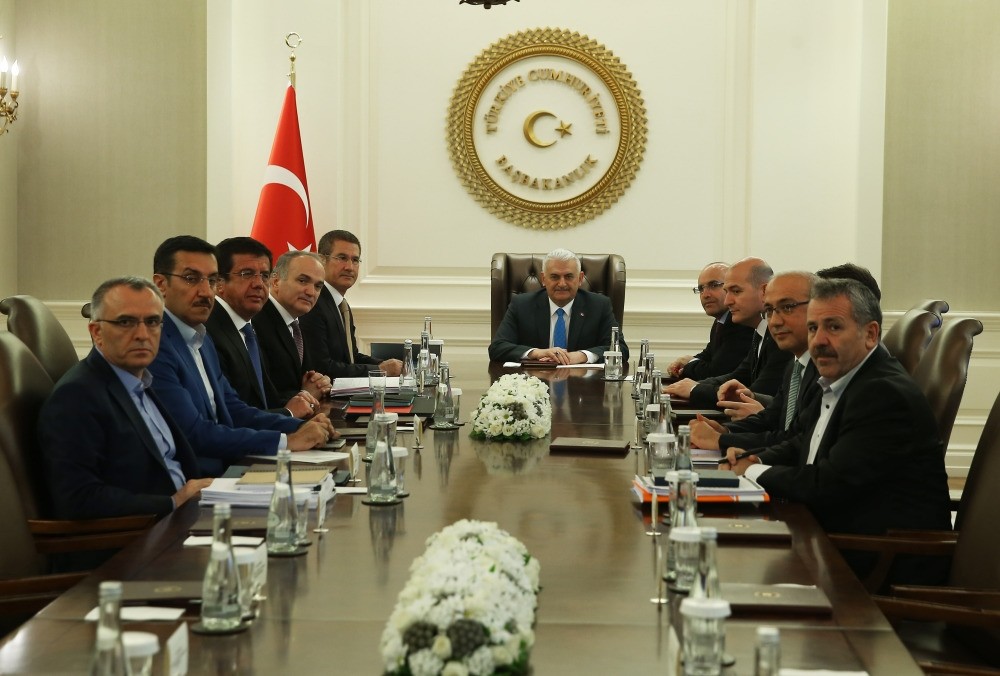 Economy Coordination Council gathered under the chairmanship of Prime Minister Binali Yu0131ldu0131ru0131m on Sunday in Ankara.
by Hazal Ateş Jun 07, 2016 12:00 am

The six-and-a-half-hour economy meeting held late on Sunday under Prime Minister Binali Yıldırım's chairmanship included a 10-phase economic plan aimed to lower the "global economic recession risk." While the impacts of the Fed's meeting on June 14- 15 were evaluated during the Economic Coordination Council, "adjustment" was stressed for the interest policy of the new period. The real sector's expectations will be addressed as well as an efficient coordination regarding the economy and investment. The regulation suggests compulsory implementation of checks with 2-D barcodes be submitted to Parliament with the production-export incentive package to be shared with the public.

The projects, which will affect millions regarding subcontractor regulations and severance pay, will be completed at short notice.

Deputy Prime Ministers Nurettin Canıklı and Mehmet Şimşek, Industry Minister Faruk Özlü, Economy Minister Nihat Zeybekçi, Energy Minister Berat Albayrak, Labor and Social Security Minister Süleyman Soylu, Customs Minister Bülent Tüfenkci, Development Minister Lütfi Elvan, Finance Minister Naci Ağbal and the relevant bureaucrats attended the economic summit held in Çankaya Palace. Prior to the summit, Prime Minister Yıldırım and Central Bank President Murat Çetinkaya held a two-hour meeting titled,"Global Economy and Turkey," which was held with the Economic Coordination Council, Finance Minister Ağbal shared his 2016 budget estimations and spoke about income, expenses and probable risks. It was stressed that the Turkish economy is more solid and resistant in the face of market fluctuations. In addition to the acceleration of investment and reforms, the problems waiting to be sold by the real sector were evaluated. The steps that will be taken from now until the end of the year were also scheduled.

The steps that will be taken and the points to be addressed within the scope of the 10-phase economy package that will affect the middle and long-term are as follows:

The planning against the Fed's decision is ready: The Central Bank has sovereignty regarding means and the necessary precautions are taken at the required times in accordance with monetary policies. The Fed made its plan against the possibility of discounted interest rates. If the Fed chooses to increase its projection, other means will be utilized. The measures also take global uncertainties into account.

Adjustment time in economy: Only one voice will be heard in the economy; the voice of the monetary policy, and adjustment will be put forward. A synchronized working model will be established with the Presidency. Delicate decisions will be made regarding high interest rates that pose as a barrier to investment. Interest rate policies, stabilized, strong growth and production will be supported.

Check Law will be opened for signature: The leading item on the economy administration's agenda is the compulsory implementation of checks with 2D barcodes. On the checks with these barcodes, all transactions of the person who cashes the check will be visible. The acceptance of a check will be decided in accordance with the screening. Transaction history going back five years will be shared with the person who receives the check. The regulation that will prevent the vicious usage of suspension of bankruptcy will be submitted quickly to Parliament.

Production-export support package: A production-export incentive package will be completed by the end of June. A new package is in the development stages and will allow for more investments in international capital in Turkey. The project related to the simplification of corporations will soon be implemented. While company setup costs are being reduced by 70 percent, the stamp tax will also be lifted on several items.

Radical steps will be taken to support company structures for production-based growth in the new period. Remedial regulations will be made in order to invigorate production in all sectors.

Special protection for investors: Sensitivity will be showed to companies that invest in Turkey. Reforms that will boost investments will continue without interruption. Also, regulations are being made regarding large production areas and industrial zones. A switch to Industry 4.0 will be supported. Attractive opportunities will continue to be offered in order to encourage investments in production areas that can create a leverage effect.

New regulations for subcontractors: Regulations that concern millions of people such as severance payments, subcontracted labor and pension promotions will be prioritized.

Fiscal discipline: Fiscal discipline will not be compromised and uncertainties for enterprises will be minimized. A much healthier and predictable environment will be created for entrepreneurs in order to boost production and tax revenues. Productivity growth and non-interest expenditure growth in public spending will be kept at a certain level. Growth targets will be maintained. All necessary steps will be taken to reach the growth target of 4.5 percent.

Normalization with Russia: The tension with Russia and its impacts on the economy were addressed during the meeting. Economic and social relations may return to normal in the coming days.

Relations with the EU: The objective of European Union membership will be maintained. The EU's double standards in negotiations over Turkey's membership and visa-free travel will be highlighted.
RELATED TOPICS