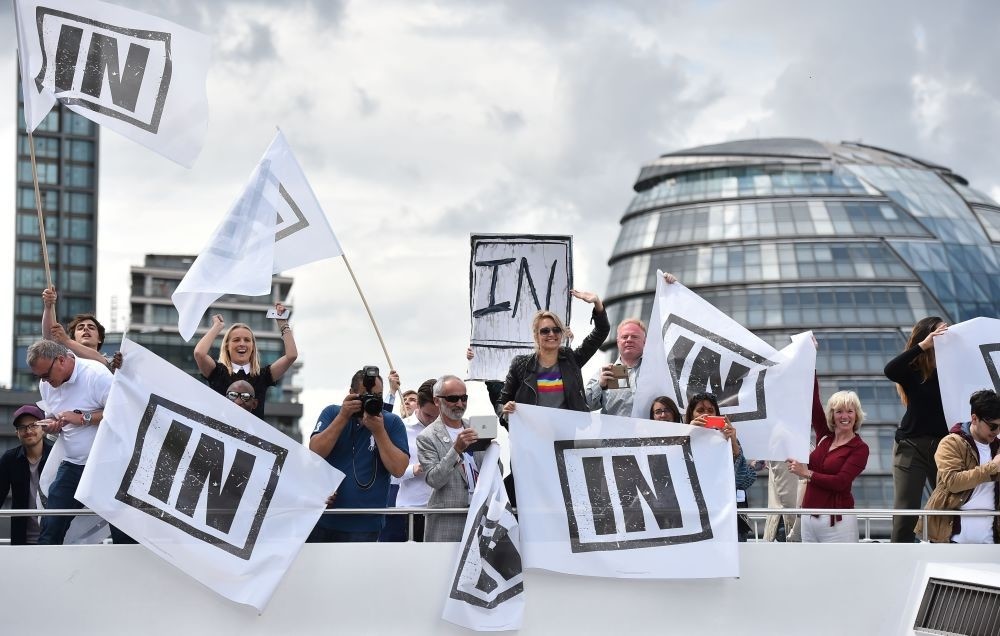 A boat carrying Remain supporters shout and wave at Brexit fishing boats as they sail up the River Thames in central London on Wednesday.
by Associated Press Jun 16, 2016 12:00 am

While Britain has been assessing every aspect of a possible exit from the EU, Britain's Treasury chief touched on the emergence of another possible issue, tax, which might see increases, curtailing spending

Britain's Treasury chief has sounded another warning about how a vote to leave the European Union in a referendum next week would damage the economy, arguing he would have no choice but to raise taxes and slash spending.

The comments threw more kindling into an already heated debate that has reached into every aspect of life in Britain. Yesterday, it was the turn of fishermen to make their views known, with campaigners in favor of "leave" organizing a flotilla up the River Thames to protest the EU's fisheries policies, which some seafarers find discriminatory.

Rolls Royce added the view of another big business for the cause of remaining in the EU. The engineering giant wrote a letter to its employees warning that a British exit, or Brexit, would be bad for business.

But it was Osborne's remarks that seized the most attention, in part because of their dire nature. He said that the government would have to raise income and inheritance taxes to fill a 30 billion pound ($42.4 billion) budget "black hole" that government ministers say will emerge if Britain leaves the EU.

"No Conservative wants to raise taxes — least of all me," Osborne said. "But, equally, Conservatives understand — and, indeed, I suspect many Labour politicians understand — that you cannot have chaos in your public finances."

Furious members of his party backing Britain's exit say they'll block any attempts to impose an emergency "punishment" budget and warned that Osborne's position would be "untenable" if he tries to push through tax increases. The opposition Labour Party also warned they would not support any budget that slashed public services.

The back and forth underscores the political civil war among the Conservatives over the issue. The increasingly hostile campaign has largely and publicly pitted Prime Minister David Cameron's "remain" camp against former London Mayor Boris Johnson for "leave." A direct challenge to Osborne mires the party deeper into squabbles that will stretch past the referendum.

"If he were to proceed with these proposals, the chancellor's position would become untenable," the 57 lawmakers who signed the letter said. "This is a blatant attempt to talk down the market and the country. The chancellor risks doing damage to the British economy in his bid to win this political campaign."

Even as lawmakers challenged Cameron to explain his views to the House of Commons on Wednesday, a small flotilla of some 30 vessels glided up the Thames outside the Houses of Parliament to back an exit from the EU.

Joining them were a smaller number of vessels backing the "remain" camp. In a reflection of the level to which the campaigns have fallen, one of the "leave" vessels turned a water hose on two of the "remain" dingies — not enough to hurt anyone but enough to leave the occupants sodden. There were also water-based exchanges of views. The vessel on which U.K. Independence Party leader Nigel Farage was traveling was intercepted by a boat carrying "remain" supporters, including rock star philanthropist Bob Geldof.

Geldof launched a verbal barrage at Farage as he came alongside. Geldof called Farage a fraud, and said that when Farage was on the European Parliament fisheries committee he attended just one out of 43 meetings. "You are no fisherman's friend," Geldof said. Farage argued EU membership had "destroyed our industry" because of access to a common resource. "We want our waters back," he said.
RELATED TOPICS