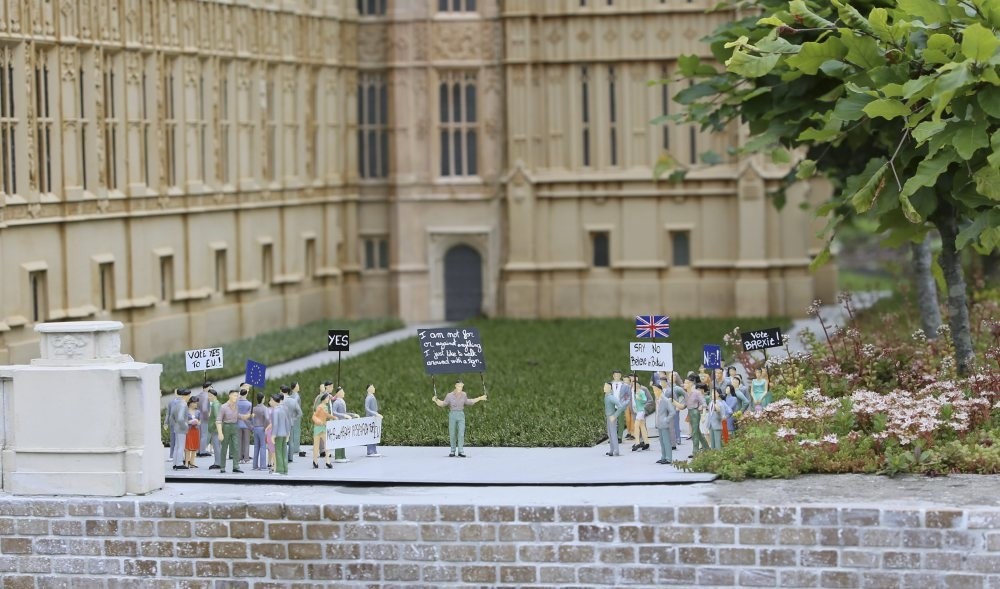 Miniature demonstrators for Brexit are seen in front of a miniature of British Parliament in Mini-Europe miniature park in Brussels.
by French Press Agency - AFP Jun 22, 2016 12:00 am

Tomorrow's decision on Britain's membership of the European Union not only causes concern for the country's Bremain supporters, but also evokes investors' concerns on a possible disintegration of the EU

Financier George Soros warned of a "Black Friday" plunge in sterling if Britain votes to quit the EU as new polls showed a razor-tight race 48 hours ahead of the referendum. The man who made a fortune betting against the pound in the so-called Black Wednesday of September 1992 said that a rejection of the European Union would deliver a major financial shock.

Britain, the world's fifth-biggest economy, would be the first state to leave the EU since the bloc's founding 60 years ago if the "Leave" camp wins in tomorrow's vote. The prospect of a Brexit has raised fears of a worst-case domino-effect collapse of the European project, born out of a determination to ensure peace on the continent after two world wars.

"Sterling is almost certain to fall steeply and quickly if 'Leave' wins the referendum," Soros wrote yesterday in The Guardian newspaper. "I would expect this devaluation to be bigger and also more disruptive than the 15 percent devaluation that occurred in 1992," the Hungarian-born U.S. billionaire predicted. "A vote to leave could see the week end with a Black Friday, and serious consequences for ordinary people."

Hong Kong investment titan Li Ka-shing, one of Asia's richest men, gave his first interview with international media in four years to say a Brexit would hurt the whole of Europe. "Of course I hope that the U.K. doesn't leave the EU," he told Bloomberg television.

World financial markets, which rallied the previous day following opinion poll gains by the "Remain" camp, traded cautiously Tuesday as new surveys showed the race is tight. In polls released overnight, two placed the "Remain" side narrowly ahead while a third indicated the "Leave" camp could prevail. The websites of six major bookmakers showed the odds heavily pointing to a "Remain" vote, with the chances of Britain staying in put at nearly 80 percent.

The latest surveys were mostly conducted after the brutal murder of Jo Cox, a 41-year-old Labour lawmaker and mother of two, who was shot and stabbed in her northern English constituency on Thursday. Her alleged killer, 52-year-old Thomas Mair, gave his name as "Death to traitors, freedom for Britain" at his first appearance in court after being charged with her murder.

The campaign in Britain remains locked on two major concerns: the economy and high immigration.

"Supermarket bills up 580 pounds [$850] a year if we leave" ran the headline of the "Remain"-supporting Daily Mirror newspaper. Pro-Brexit tabloid The Sun's front page said "stone-throwing migrants" had stormed the French port of Calais to try to gain access to Britain with the headline: "Let us in before you vote out."

Opinion polls consistently show just over 10 percent of Britons has not made up their minds.

"I have not quite decided yet," said Katie Molloy, 24-year-old music teacher in central London. "The only thing I have read about is immigration," she told Agence France-Presse (AFP), adding, however, that she believed sufficient migration controls were already in place. "I will vote - I think 'In' because anything that unites countries is a good thing."

With time running out, an audience of thousands will gather later in the day in Wembley Arena for a debate between the two camps, featuring the former mayor of London, Boris Johnson, for "Leave" and his successor Sadiq Khan for "Remain."

The anti-EU U.K. Independence Party (UKIP) is due to reveal a new poster, after critics accused its previous billboard that showed a line of migrants walking across Europe with the line "Breaking Point," of stirring hate.

British sports legends joined the fray, too. "We live in a vibrant and connected world where together as a people we are strong," English football great David Beckham wrote on Facebook. "For these reasons I am voting to Remain."

English cricket legend Ian Botham advised people to leave the bloc, sounding the alarm on immigration. "Our beautiful countryside is what makes Britain the place it is and this island was not designed for 100 million people," he wrote in The Express.

One study released yesterday showed the "Remain" side with a 6 point lead on 53 percent, using a methodology that adjusts data according to how likely respondents are to vote. Nevertheless, the researchers NatCen emphasized that a 50-50 result was still within their survey's margin of error.

Two newspapers, The Guardian and The Daily Telegraph, used their front pages to endorse opposite sides of the campaign. "Vote against a divided nation that turns inwards. Vote to remain," The Guardian said. The Daily Telegraph implored readers to back Brexit. "A world of opportunity awaits a fully independent United Kingdom," the broadsheet argued.

In Spain, Economy Minister Luis de Guindos said Britain should not be holding the referendum. "Staging a referendum is a mistake, we have opened Pandora's Box," he told a business forum late Monday. "I am convinced Brexit will not happen, I am convinced that the British will be rational."
RELATED TOPICS