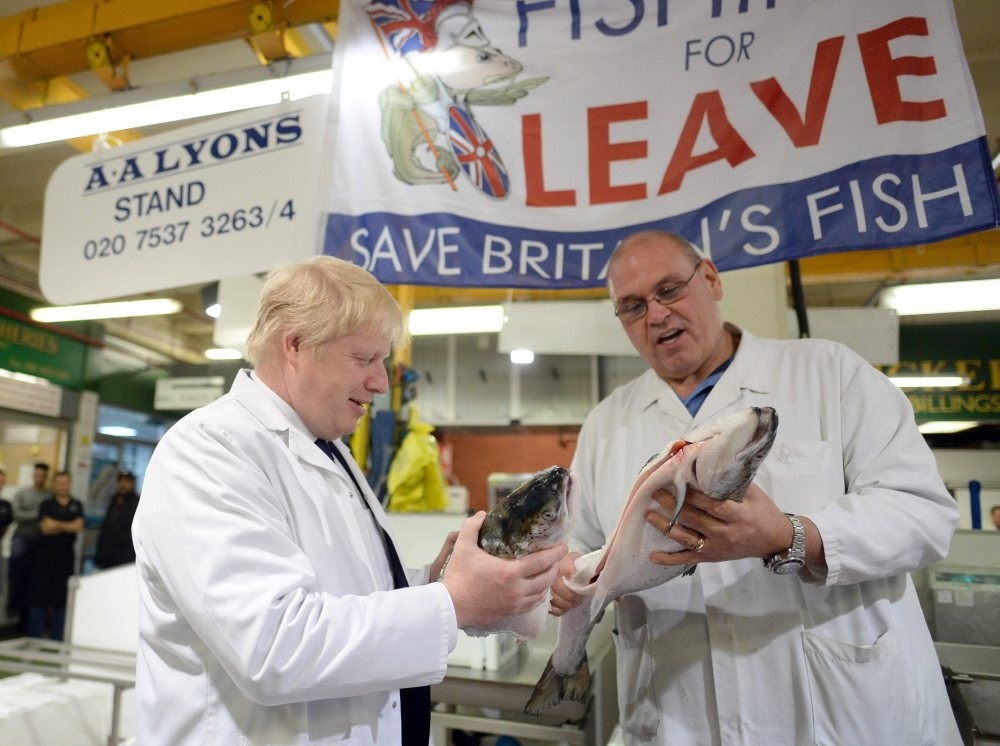 Ahead of the referendum on whether Britain will remain in the EU, businesses try to convince the public that exiting the EU means less trade, less production and fewer jobs for the economy

More than 1,200 business titans united yesterday to warn against Britain breaking with the EU, as rivals battled for the last votes on the eve of a tightly fought referendum that will shape Europe's future. The world's fifth-largest economy will suffer a powerful blow to growth and jobs if Britain becomes the first state to defect from the EU in the bloc's 60-year history, corporate chiefs warned. The "Remain" camp has a razor-thin lead: 51 percent versus 49 percent for "Leave" among those who have decided, according to an average of polls compiled by What UK Thinks.

Bookmaker Betfair said the latest odds implied a 76-percent chance of "Remain" winning, although surveys show more than 10 percent of people have not made up their minds. "Britain leaving the EU would mean uncertainty for our firms, less trade with Europe and fewer jobs," said the chiefs of 1,285 companies employing 1.75 million people, ranging from Virgin boss Richard Branson to media tycoon Michael Bloomberg.

"Britain remaining in the EU would mean the opposite: more certainty, more trade and more jobs. EU membership is good for business and good for British jobs," they said in a letter to The Times newspaper.

Investors are on alert over the historic vote, with many markets edging gingerly higher on the expectation that Britons will finally decide to stay. If Britain votes to go its own way, however, influential financier George Soros has warned of a Black Friday plunge in sterling.

A British withdrawal would trigger a lengthy exit negotiation, leading to the loss of unfettered access to its partners in the 28-nation market and forcing the country to strike its own trade accords across the world. In Europe, the referendum has raised concerns of a domino-effect ripple of exit votes that would imperil the integrity of the bloc, which was born out of a determination to force peace on the continent after two world wars.

With uncertainty rife, the world's leading central banks have consulted over how to react in the vote's aftermath, according to the European Central Bank. Leading Brexit campaigner Boris Johnson, a former mayor of London touted as a future prime minister, won a standing ovation from many people late Tuesday when he urged Britons in a public debate to declare "Independence Day" by voting to pull out of the EU.

"This is our last chance to take back control of so much that matters in our lives," he told Sky News yesterday. Though many voters fret over the financial consequences of a Brexit, others relish the prospect of taking back power from Brussels and reining in high levels of immigration. "I think we need to make our contribution to Europe and to the global economy. And the best way we can do that is by being in it, not by ignoring it," Chet Patel, a 44-year-old telecoms worker told AFP in central London.

Pat Hand, a 50-year-old construction worker, said he would be casting a vote to leave the EU. "The country is in an absolute mess. I work in construction and every single person on my job is not English," he said.

Prime Minister David Cameron, whose job is under threat in case of an EU exit, said leaving the EU would create a huge economic problem without resolving immigration challenges. In an interview with the Financial Times, he predicted a "Remain dividend" for the economy if Britain stays, with businesses choosing to invest and create jobs after the vote. The prime minister rejected EU critics' accusations that Britain is "shackled to a corpse." "You can see the European economy's recovery. It is the largest single market in the world," he said.

Two newspapers used their front pages yesterday for last-minute endorsements of opposite sides of the campaign. "Lies. Greedy elites. Or a great future outside a broken, dying Europe," wrote the Daily Mail. "If you believe in Britain vote Leave." But the Daily Mirror urged readers to back EU membership "for your jobs... for your children... for Britain's future". The Mirror described it as "the most divisive, vile and unpleasant political campaign in living memory."

Around the world, events will be held to mark what would have been the 42nd birthday of lawmaker Jo Cox, who was shot and stabbed to death last week on a village street in northern England, stunning the campaign.

In his first court appearance on Saturday, her alleged killer, Thomas Mair, gave his name as "Death to traitors, freedom for Britain." Cox's widower Brendan said his wife, a noted pro-EU campaigner who worked for refugee rights, had been killed because of her political views. "She worried about the tone of the debate... The tone of whipping up fears and whipping up hatred potentially," he told the BBC.