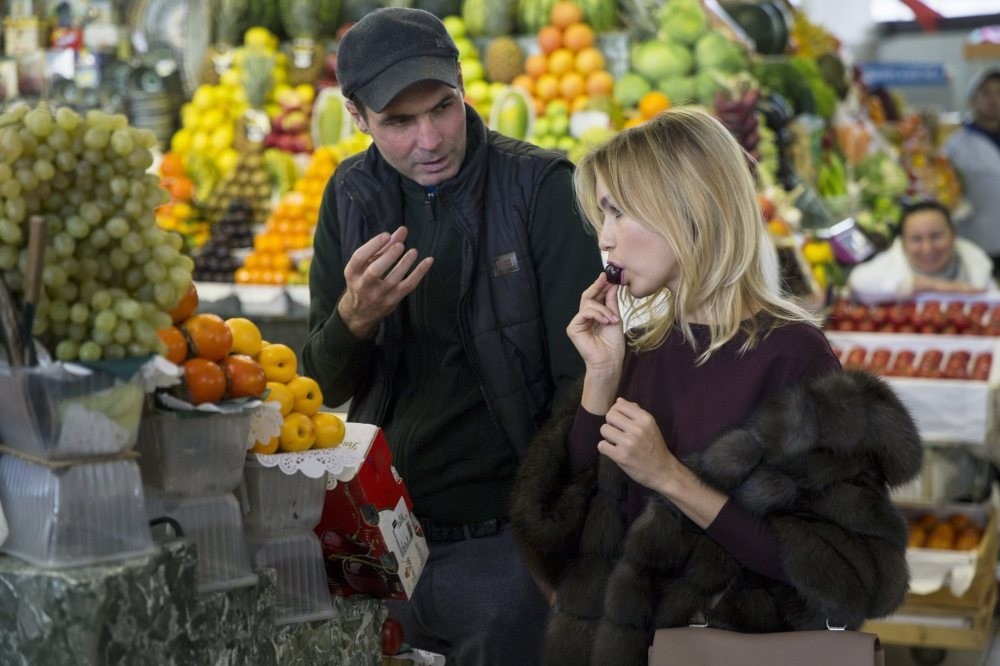 A woman tastes a cherry at a food market in Moscow. Russian sanctions on Turkish food imports appear not to have harmed Turkey.
by Daily Sabah Jun 23, 2016 12:00 am

Russia's sanctions on Turkish food imports has had limited effects on Turkey, since alternative markets were found and the ruble weakened, according to a report prepared by the Russian Gaidar Institute for Economic Policy

The latest report, "Economic Situation in Russia: Tendencies and Problems in Socio-Economic Developments," published by the Gaidar Institute for Economic Policy, an independent non-profit research organization in Russia, states that Russian sanctions on Turkish food imports have failed to reach its target of teaching Turkey a lesson, due to a weakening ruble and Turkey's ability to find new export markets.

After Turkey downed a Russian warplane for violating its airspace near the Syrian border in November, the furious Russian government responded by announcing sanctions on Turkey. Turkish food imports were blocked at Russian border gates after Jan. 1. Moscow called for Russians to not visit Turkey, and opened investigations into Russian tourism agencies organizing tours to Turkey. Russia refused to issue work permits for Turkish citizens and called for an end to visa-free travel.

Moscow's intention to damage the Turkish economy has nonetheless missed the intended target. Gaidar's report, based on data examining the prices of the imported goods throughout recent years, says the prices of imported goods have been increasing at a fast pace due to both the considerable devaluation that the ruble has experienced, coupled with weakening domestic demand. This situation has created a great disadvantage for importers, which in turn highly decreased the influence of sanctions imposed on Turkish products.

The report examines how Turkish food exports have been affected throughout the process of Russia's embargo. Turkey, which was the major tomato exporter to Russia prior to the sanctions, has managed to find alternative markets to sell food products to, such as Azerbaijan, Belarus, Israel and Syria. The report examines various agricultural products that Turkey exported to Russia in recent years, which were directed to alternative markets, except for cucumber, the only Turkish agricultural product that was to some extent affected by the sanctions.

When prices for many staple foods in Russia went through the roof, Russian Federal Service for Veterinary and Phytosanitary Surveillance (Rosselhoznadzor) Vice President Aleksey Alekseyenko invited Turkish officials to discuss technical issues regarding the export of fresh fruits and vegetables. Russia's request to discuss the exports, previously made verbally and rejected by Turkey, was later approved when Russia made the request in writing on April 26. Although both sides met in Russia to discuss the issue, there has been no concrete step towards the lifting of sanctions as yet.

On Jan. 1, the price in Russia of one tomato reached TL 6 ($2.06). Despite increasing imports from the Czech Republic, China, Poland and the Middle East, Russia has not been able to slow the increase in prices, due to logistical costs and expanding legal procedures.Russians spent 50.1 percent of their income on food in February. The price of tomatoes increased 5.2 percent in April, and fruit prices increased nearly 20 percent over the first four months of 2016. Since the price of food has the greatest effect on inflation, Russia sought rapprochement with Turkey.

Russia's central bank announced that it expects inflation to come in at around 6 percent in 2016, which will bring the country closer to its 4 percent target for 2017. However, a panel of analysts surveyed by Focus Economics does not conform to the central bank's outlook, instead forecasting inflation at 7.4 percent for 2016, falling to 6 percent in 2017. With an economy depressed by tumbling oil prices and Western sanctions, the International Monetary Fund (IMF) forecasts for the Russian economy in its latest World Economic Outlook report in April are that it will not grow in 2016, but rather contract 1.8 percent. In 2017, the IMF forecasts modest growth of 0.8 percent.
RELATED TOPICS