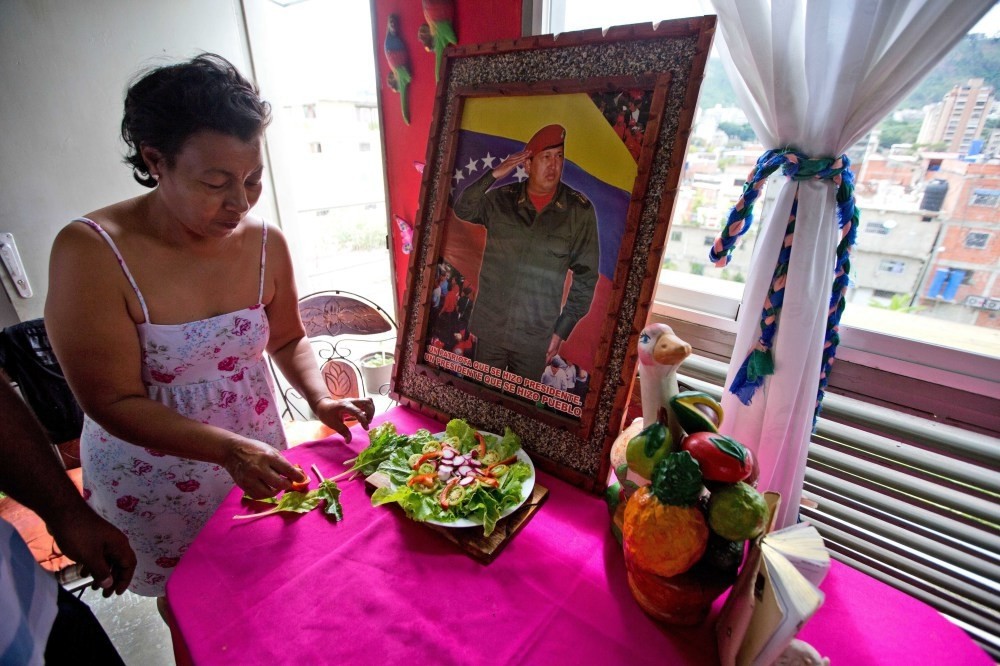 Petra Lezama prepares a salad with vegetables from her roof garden in Caracas, where she keeps a photo of Venezuelau2019s late President Hugo Chavez.
by Associated Press Jul 05, 2016 12:00 am
Kelly Vega says she lost 30 pounds in three months as she focused on feeding her 6-year-old daughter rather than herself.

"We are eating two meals a day. If we eat breakfast, there's no lunch. If we have lunch, there's no dinner," she said. This socialist country is suffering from severe food shortages that are making it hard to get enough to eat, even though Venezuela has the largest oil reserves in the world. Government officials blame the shortfalls on right-wing business owners hoarding products to sow chaos, while their detractors say it's the result of chronic economic mismanagement. At the same time, food production and imports are down and inflation is high. Some Venezuelans who had given up produce as an unaffordable luxury are now turning to urban farming to get vegetables back into their diets. With the help of a government-sponsored urban farming campaign, the head of the newly created Ministry of Urban Agriculture, Lorena Freitez, hopes home gardens will make up 20 percent of the food supply by 2019.

"Urban agriculture will cushion the effects of the shortages. Cities will not be so dependent on imports, and we will make great strides in food sovereignty," she said. Now, amid the narrow roads and crumbling shacks of one of South America's largest slums, a careful look yields something unexpected: a carefully tended tomato plant and a bush of basil leaves. The family members growing the plants hope that in a few months, they'll be eating vegetables again. A team of researchers from three leading local universities found that 12 percent of the people in Caracas skip meals. Researchers say that is a sharp increase from a few years ago, when the price of oil had not yet crashed, and many Venezuelans still found it consistently easy to get the food they needed.
RELATED TOPICS