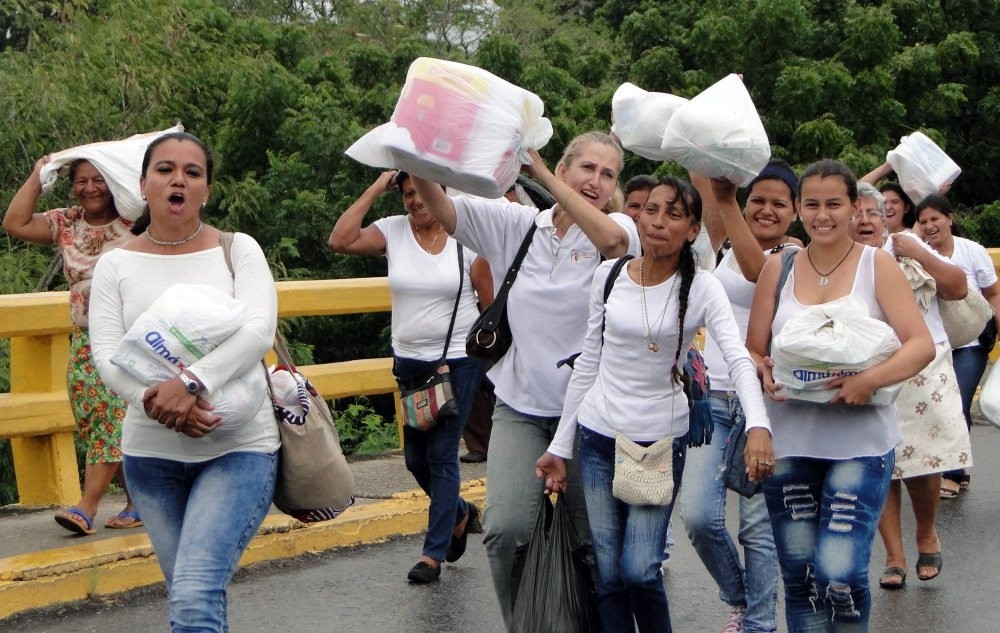 Venezuelan women go back to their country after buying supplies in Cucuta, Colombia.
by Jul 09, 2016 12:00 am

The price of Venezuela's oil exports has plunged. The country no longer has enough dollars to import the food and medicine it needs. The 720 pct inflation of prices has created an absurd economic reality

Venezuelans are suffering economic and political turmoil that has caused food shortages and deadly unrest over recent months. Agence France-France (AFP) interviewed five of the human faces of the crisis: ordinary citizens whose lives have been thrown into chaos.

Elizabeth Arana chokes on her tears as she sits in the morgue where her brother Roswill's body lies. The 28-year-old police officer was shot dead, one of thousands of victims of deadly violence in Venezuela. He left behind a four-year-old son. Media reports suggested he was killed for his motorbike. But his sister reckons it was a targeted assassination. "I've got a pain in my insides," from the grief, she sobs.

The Venezuelan Violence Observatory, a nongovernmental organization, estimates there were 90 homicides per 100,000 inhabitants last year - some 28,000 killings overall including killings during police operations. Authorities said five people were killed during protests and looting in June. Administrative worker Yasmari Bello, 39, can no longer get the treatment she needs for her breast cancer. The price of Venezuela's crucial oil exports has plunged. The country no longer has enough dollars to import the medicine it needs. "They suspended my treatment from January to May," Bello said. "I suffered stress. I lost weight. I felt I had fought the illness for months and I could relapse."

The Venezuelan Pharmaceutical Federation estimates that 85 percent of necessary medicines are in short supply. Eventually Bello got hold of medication sent from Spain. Her current batch will last until mid-July. "I do not blame the government or the opposition," she said. "I am just a patient looking for a solution."

Eugenia Parra is studying to be a pharmacist, but her studies risk being disrupted by having to queue at the shops. "There is a queue for everything here. To get cash, to buy food," Parra, 28, said.

In the end she leaves the line emptyhanded. If she waits any longer she will miss lectures, compromising her future.

Richer families can obtain the supplies they need from black market retailers known as "bachaqueros." But Parra relies on the subsidized rations. "A bachaquero earns more than a professional. I've lost all hope. The first chance I get I will leave" the country, Parra said. "Staying here means wasting your youth."

At his food cart in the street, Jenner Moron is making stacks of cash. The problem is, they are worth little. Rampant inflation has dragged down the value of the Venezuelan bolivar. "When I get home I think I am bringing back some earnings but when I go to pay a bill I realize I have nothing," Moron, 21, said. "It's an illusion."

After selling a few dozen hotdogs, he has so many banknotes that it isn't safe to carry them in the street. He rushes to a safe deposit box four times a day to stash them.

The inflation of prices combined with the devaluation of the currency has created an absurd economic reality for businesses like Moron's. He used to sell up to 500 hotdogs a day in the busy streets of Caracas. Now he sells about 120. The price in bolivars has soared, but the value of that currency has plunged. "We have more cash coming in, but we are earning less." Elsewhere in the capital, however, Denia, 52, is making a wide profit margin.

She can sell a bag of sugar for up to 40 times the official price. Those who can afford to will buy it just for the convenience of not having to queue for hours. Denia would not give her last name because she is breaking the law with her part-time job. To top up her income as a porter, she is also a "bachaquera."

The nickname for the black market retailers comes from "bachaco," a kind of ant that hoards food. "Whenever I get a chance, I wait in a queue" to buy sugar, flour or rice, Denia said. She can buy a kilogram of sugar for 70 bolivars at the subsidized rate and sell it on the street for 3,000.The government officially rations citizens to two units of each basic product per week. But Denia gets hold of more by bribing state employees and distributors. She risks five years in jail for hoarding.

Data analysis estimates that in any given queue outside a shop, half of those standing in line are buying to resell. Venezuela's minimum wage is 33,600 bolivars - just $54 at the official fixed exchange rate. "No one can live on that," Denia said.
RELATED TOPICS