Weak pound may not offset Brexit turbulence for British exporters 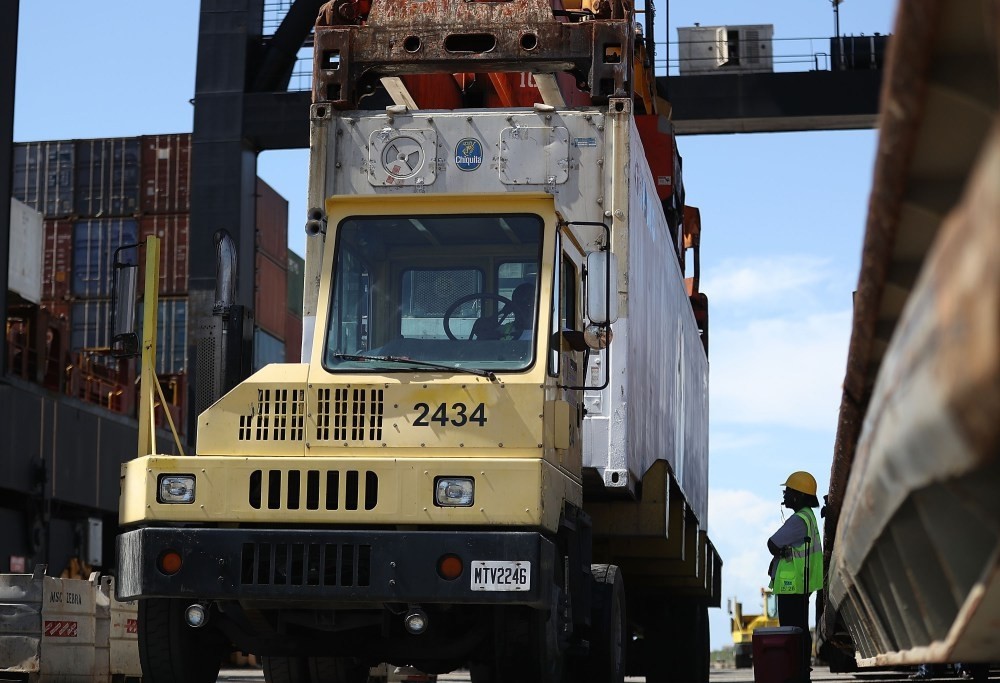 Shipping containers are offloaded from a cargo ship at Port Everglades on June 24, in Fort Lauderdale, Florida. (AFP Photo)
by Jul 09, 2016 12:00 am

The fall in a nation's currency is thought to be good for Britain's exports. However, the collapse of sterling after the Britain's decision to leave the EU has made British exporters worry, since the decision has put the country's future in doubt

The pound's plunge since Britain voted to leave the European Union is good news for factory boss Tony Hague.

He has received enquiries from potential buyers outside the country tempted by the lower prices for his company's products, as sterling has sunk to a 31-year low against the dollar after the June 23 referendum, which sparked pandemonium in British politics and financial markets.

But customers of Hague's company, PP Automation and Control, are also seeking something he cannot give: assurances about the future of British trade with the remaining 27 nations of the EU bloc and with the wider world.

They are wondering what Brexit will mean for Britain's ability to sell abroad in the long term.

"We're already having some of our customers, in Germany for example, asking for some statements and some thoughts about what (the Brexit vote) might mean longer term," Hague, PP Automation and Control's managing director, said at the headquarters of his company in the industrial West Midlands town of Walsall.

"And of course, no one can provide any answers," he said at the plant, which still flies a blue EU flag dotted with gold stars representing the bloc's member states, alongside Britain's Union Jack.

The lack of clarity reflects the wider uncertainties in Britain, once viewed as one of the West's most stable democracies, since the 52-48 percent Brexit vote tipped British politics into its biggest crisis of modern times.

After previous downward lurches in sterling - such as in the wake of Black Wednesday in 1992 when Britain crashed out of the European Exchange Rate Mechanism - exports rose sharply.

Bank of England Governor Mark Carney has said any benefit this time could be dampened because foreign buyers are unclear about what trade deals a post-Brexit Britain will forge with the world, while the pace of global economic growth remains lacklustre.

"I think exports will disappoint," said Samuel Tombs, economist at Pantheon Macroeconomics. "Growth will pick up because of the weaker pound but if you are an exporter you are facing the most uncertainty of anyone at the moment."

Companies like PP are the first link in the supply chain. Almost all of its products end up exported either directly to machinery manufacturers in Europe or Asia, or indirectly through British firms who sell goods abroad.

Manufacturers account for only around 10 percent of British economic output but employ 2.7 million people and create about 45 percent of the country's exports, nearly half of which went to European Union countries last year.

The manufacturing sector was a key battleground in the referendum debate because of its exposure to world trade.

Supporters of keeping Britain in the EU said it made no sense for the country to distance itself from the buyers of the country's exports and from the bloc's trade deals with other nations around the world.

Leave campaigners said the EU would cut a deal with Britain because of its economic importance but insisted that London be given the right to restrict immigration from EU countries.

Now factories are under the spotlight again as investors and economists look for an early steer on how the economy has reacted since the Brexit vote. The first clear sign is likely to come on Aug. 1 when financial firm Markit will publish its manufacturing purchasing managers index for the month of July.

Tombs, the economist, said that until Britain's trading relationships outside the EU becomes clear, manufacturers are likely to be reticent about investing to increase their capacity to export.

"In general the anecdotal reports are that orders have gone quiet, and that manufacturers are putting their recruitment and investment plans on hold," said Zach Witton, deputy chief economist at EEF.

For some manufacturers the weak pound will drive up import costs - whether due to the higher cost of crude oil, which is denominated in dollars, or goods from euro zone countries.

"There will be higher input costs into our business - we buy quite a lot of raw materials from Europe, and we're starting to see costs on those rise," said Jonathan Lane, sales director at Arrow Solutions, a cleaning chemicals manufacturer based in a former mining village of Moira, Derbyshire.

But the company also sees opportunity to expand in high growth regions like China, which could help it achieve its ambition to increase exports to two thirds of its business by 2020, from around half now.

"We quoted on a quite substantial piece of business in China yesterday, and when we came to look at the numbers we found we were in a much better position than when we looked at the project earlier - purely because of the exchange rate change," said Lane.

For PP's Hague, who is pressing on with investment plans, sterling's weakness offers a bit of relief. "This time last year when the euro was running at about 1.4 (to the pound), it was killing some of our customers," he said.

The company's first decade was marked by economic turmoil and by the time current chairman and chief executive officer David Fox arrived in 1979, business was "flat as a pancake".

But by the early 1990s it attracted its first big overseas customer, Japanese machinery maker Yamazaki Mazak, which opened the door to contracts with the likes of Toyota, which began car assembly in nearby Derbyshire in 1992.

PP moved into its current premises about 20 years ago, where the shop floor has tripled in size. This year, the company is on track for 20 million pounds ($26.5 million) in sales.

On a recent morning, around 200 staff in red shirts were busy assembling machinery and producing reams of cables in the factory.

Hague says he is optimistic not only because the weak pound will help sales abroad. He also says British firms supplying British clients who will be better able to compete in the domestic market now that imports are more expensive - because it will take more pounds to buy every dollar or euro-based product.

Hague said PP staff move frequently between its British headquarters and a subsidiary in Germany, where it is expanding, highlighting the company's need for continued free movement of labour between Britain and the European Union.

"We're desperate to get a German-speaking engineer working at this end, as well as in Germany," said Fox, who has guided the company through three recessions.

Fox added that the very few skilled engineers available to companies like PP are much more likely to be Polish, say, than British.

Some of PP's overseas customers have asked Hague for the British government's official stance on future trade deals. That has been harder to provide.

A spokesman for Britain's business ministry said the trade minister, Mark Price, had written to a number of British companies and foreign firms investing in Britain, and told them that the government trade policy would address their needs.

But Hague is worried by the lack of detailed strategy. "There's nothing available, which I think is appalling."