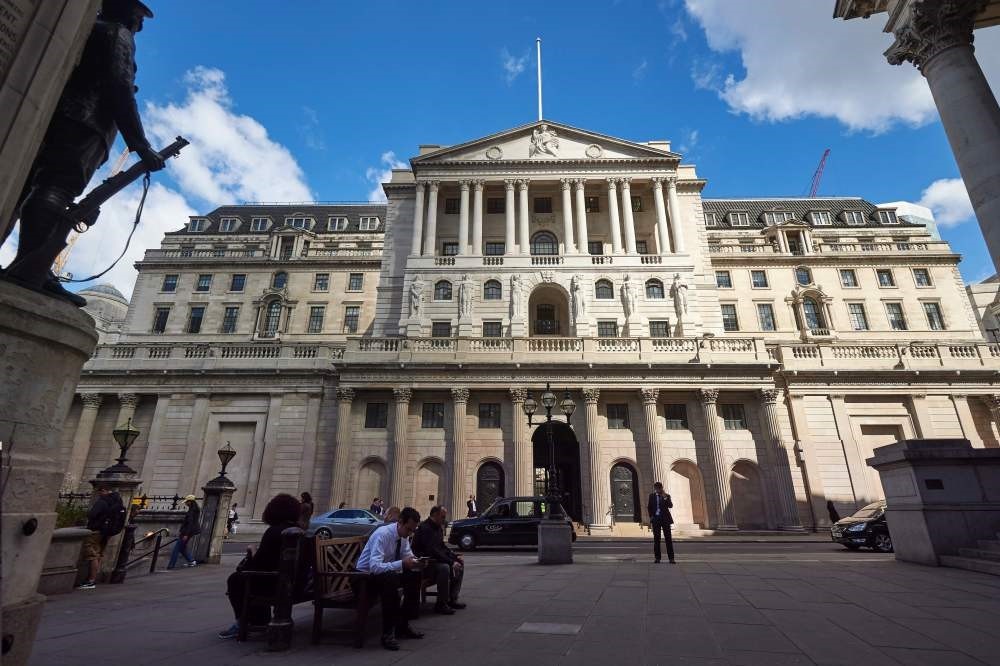 Pedestrians walk past the Bank of England in the City of London on July 14. The Bank of England kept its interest rate at 0.50 percent, but signalled a possible August cut in response to Britain's vote to exit the EU.
by Jul 15, 2016 12:00 am

The Bank of England surprised markets by keeping interest rates unchanged, rather than going for an expected cut. However, the bank signaled that it might loosen monetary policy in August

The Bank of England kept interest rates unchanged yesterday, wrong-footing many investors who had expected the first cut in more than seven years with Britain's economy reeling from last month's vote to leave the European Union.

The BoE said it was likely to deliver stimulus in three weeks' time, possibly as a "package of measures," once it has assessed how the June 23 referendum decision has affected the economy, the world's fifth largest.

"In the absence of a further worsening in the trade-off between supporting growth and returning inflation to target on a sustainable basis, most members of the Committee expect monetary policy to be loosened in August," the Bank said in minutes of its July meeting which ended on Wednesday.

"The precise size and nature of any stimulatory measures will be determined during the August forecast and Inflation Report round," it said.

Of the Bank's nine rate-setters, only one - Jan Vlieghe, who had sounded increasingly in favour of more help for the economy - voted for a rate cut.

Chris Williamson, chief economist with financial data firm Markit, said the BoE had opted not to rush into "a knee-jerk reaction" to the Brexit vote.

"Policymakers will therefore need to do a lot more to shore up confidence and keep the gears of the economy turning in the coming months," he said in an email to clients.

The surprise decision to keep rates on hold pushed up sterling to a two-week high against the U.S. dollar of $1.3480 and British government bond yields rose.

The blue chip FTSE 100 and mid-cap FTSE 250 lost some of their earlier gains and housebuilders such as Berkeley and Barratt Developments turned negative.

Most economists taking part in a Reuters poll had expected the central bank to halve its Bank Rate to 0.25 percent in order to cushion the economy from the shock of the Brexit vote.

Sterling plunged more than 13 percent against the dollar in the days after the referendum and trillions of dollars were erased from stock markets globally.

However, the quicker-than-expected appointment on Wednesday of Theresa May as Britain's new prime minister has helped settle nerves in financial markets.

BoE Governor Mark Carney was due to meet Britain's new finance minister, Philip Hammond, on Thursday. Hours after his appointment, Hammond said the government would do whatever was necessary to restore confidence in the economy and suggested a less aggressive approach to bringing down the budget deficit.

Carney sent a clear signal two weeks ago that stimulus was on the way over the summer in an attempt to show the economy was in safe hands even as Britain's political leadership crumbled after the EU vote.

But Carney has also suggested he does not favor a sharp cut in borrowing costs because of the possible impact on banks based in Britain, and he has said he did not want to follow the example of the European Central Bank and the Bank of Japan by cutting rates below zero.

In the minutes published on Thursday, the Bank said the composition of any additional stimulus measures "would take into account any interactions with the financial system".

It also said the extent of any further stimulus measures would be based on its updated forecasts.

The MPC raised its expectation for economic growth in the April-June period - only a few days of which fell after the referendum - to 0.5 percent from a previous forecast of 0.3 percent.

But it said growth is likely to weaken in the near term as a result of the referendum and the Bank cut its forecasts for investment in the housing sector significantly while also lowering its expectations for house prices in the near term.

Data released early on Thursday showed interest among buyers in Britain's housing market diminished to its lowest level since mid-2008, as the global financial crisis was deepening, adding to early signs of the Brexit hit to the economy.

The BoE said it expected "sizeable falls" in commercial real estate prices in the near term.

Last week, Carney warned that the financial risks of Brexit were materializing after valuations in the commercial property sector fell sharply and prompted some investment funds froze their funds.