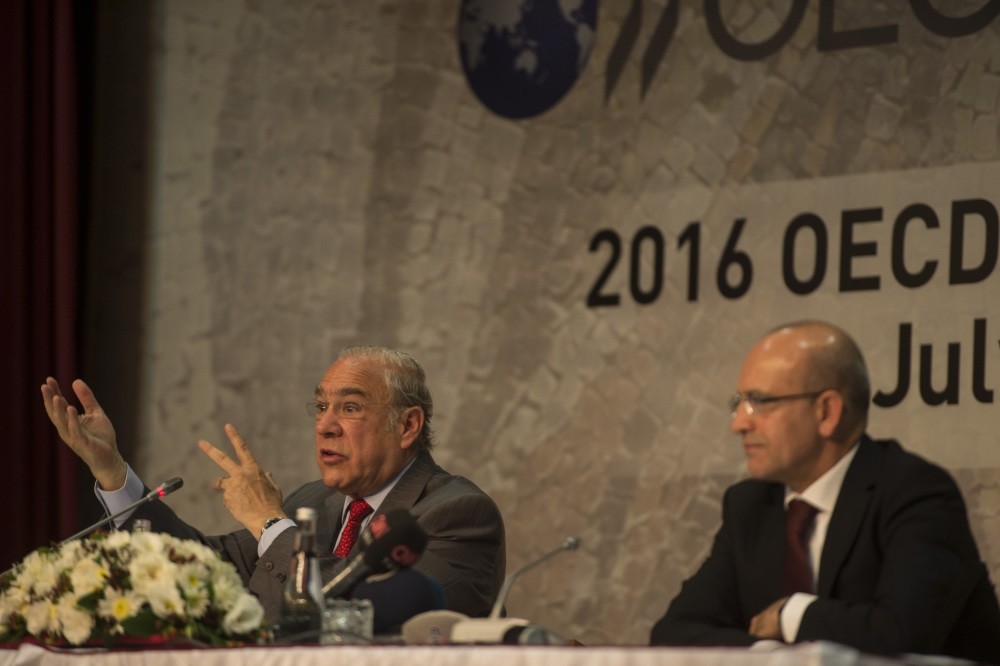 The OECD 2016 Economy Survey of Turkey was announced in the press meeting in Gaziantep attended by OECD Secretary-General Angel Gurria (L) and Deputy Prime Minister Mehmet u015eimu015fek.
by Daily Sabah Jul 16, 2016 12:00 am

The OECD 2016 Economy Survey of Turkey was released Friday and states that domestic savings should be increased, and the distribution of foreign demand should be more balanced in order for the strong Turkish economic growth to be sustainable

The Organization for Economic Cooperation and Development (OECD) foresees 3.9 percent growth for Turkey this year as well as 3.7 percent growth in 2017, and has stated that in order to get strong and sustainable growth domestic savings should be increased and the distribution of foreign demand should gain a new balance.

The said forecast does not include any change to the predictions regarding Turkey's economic outlook in the survey published by the OECD in June.

The previous 7.9 percent 2016 Consumer Price Index (CPI) prediction was reduced to 7.4 percent, but the 7.3 percent forecast for 2017 was raised to 7.4 percent. No change was made in the organization's current account deficit predictions.

The OECD 2016 Economy Survey of Turkey published on Friday says that economic growth was seen as strong despite negative conditions over the past two years, such as the four elections, internal security risks, deterioration in commercial relations with Russia and refugee influx. The survey cites strong growth over the past years despite negative regional and internal conditions, saying: "Employment creation was strong especially in underdeveloped regions. Turkey does not experience the circle of 'sudden rise and fall' anymore, but foreign account deficits have grown and the net foreign investment position has been somehow deteriorated over the last 10 years." Stressing that domestic savings should be increased in order to have strong and sustainable growth and distribution of foreign and domestic demand should be balanced, the survey also suggests that the required competitive power should be sought, by decreasing wages and price inflation and increasing productivity.

The OECD has recommended Turkey fully implement the structural reforms included in the action plan this year and monitor the implementation process of reforms in order to have sustainable growth.

The survey points out that despite the noteworthy growth in the manufacturing sector a majority of producers in good condition come across obstacles due to the shortcomings within the framework of implemented policies, and producers have lagged behind in productivity even though they have preserved their competitive power and increased employment. Some companies, on the other hand, have survived in the "informality pool" due to poorly implemented regulations as well as less-skilled staff and low productivity.

According to the survey, the solution for the aforementioned problem is to arrange the work environment comprehensively in a way to increase productivity and create opportunities for more promising companies to expand.The survey says that regardless of an increase in imports, Turkey's potential to provide intermediate goods entry to other countries is limited. It also suggests that while this shows that Turkey has been specializing in final products, it also points to obstacles in its trade and investment policies, underdeveloped labor capital, and lack of investment in innovation, research and development and information-based capital.
RELATED TOPICS