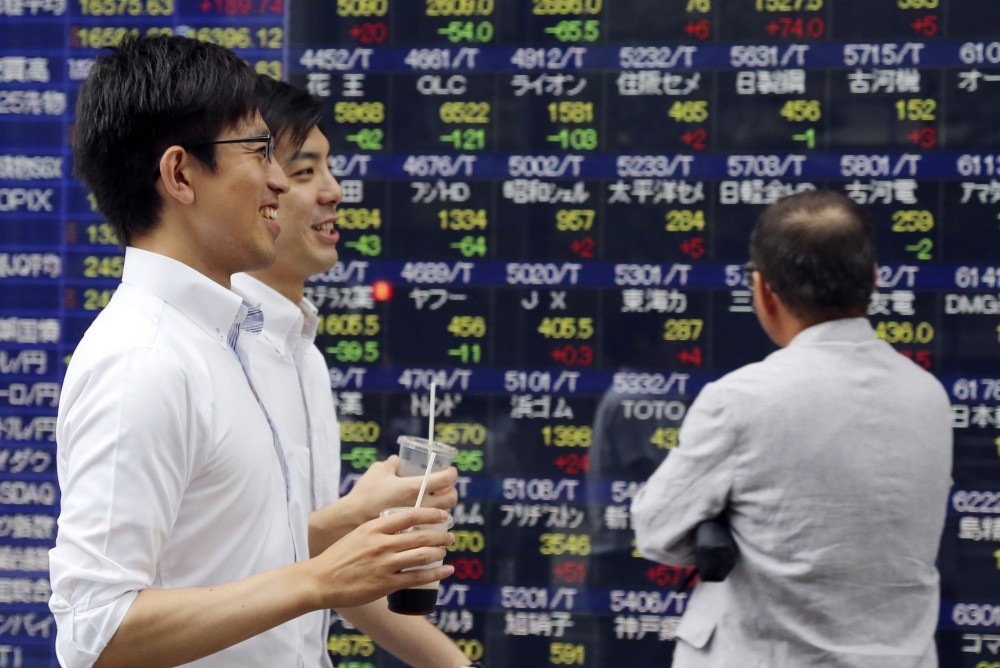 People walk by an electronic stock board of a securities firm in Tokyo, Friday, on July 15. Asian shares were higher Friday after China reported steady economic growth in the second quarter of the year.
by Jul 16, 2016 12:00 am

Reassuring Chinese data lifted world stocks to an eight-month high on Friday though Europe ended an otherwise strong week subdued after an attack by a gunman at the wheel of a truck in the south of France killed at least 84 people.

Travel stocks and France's CAC 40 pushed Europe's main bourses down 0.5 percent after a gunman on Thursday evening ploughed into a crowd celebrating Bastille Day in the Riviera resort of Nice.

Having set batch of record highs this week, Wall Street also looked set to open flat with traders bracing for a deluge of retail sales, consumer confidence, inflation and manufacturing data as well as a dump of corporate earnings.

News, though, that China's economy grew a slightly better-than-expected 6.7 percent in the second quarter as the government stepped up spending helped bolster the week's global rally in risk assets.

MSCI's 46-country All World stocks index was at its highest since early November as a scorching 5 percent surge by its emerging markets component helped a 2.7 percent jump on the week.

The pound, which took a battering after the UK voted last month to leave the European Union, was set for a weekly gain of roughly 9 percent against the yen, its best ever against the safe-haven Japanese currency.

For the risk adverse holders of the yen it has been a brutal week all round amid talk authorities there are readying another super-sized slug of stimulus.

It was down almost 0.5 percent at 105.81 yen per dollar on the day ahead of U.S. trading having dropped as low as 106.27 overnight and was heading for a weekly fall against the greenback of 5 percent, its biggest since February 1999.

"The Chinese data is helping risk sentiment," said Yujiro Goto, currency strategist at Normura. "Overall, we have had some good headlines this week, like more political stability in the UK, expectations of more Japanese stimulus and all these are contributing to investors selling the yen."

There has been a big shift in direction in bond markets too after a searing, month-long rally.

Post-Brexit jitters have been eased by the quick installation of a new UK prime minister and investors are sensing global focus may be shifting towards fiscal rather than the central bank stimulus that has been pushing global borrowing costs to record lows for years.

Benchmark 10-year German bond yields, which move inverse to price, were set for their biggest weekly rise in almost three months and for U.S. Treasuries it was set to be the largest in exactly a year having pinged to 1.535 percent from last week's all-time low of 1.3210 percent.

"In all probability we have seen the low in bond yields unless there is another major global shock of some kind," said Larry Hatheway, group chief economist at fund manager GAM.

After no less than three Federal Reserve policymakers signaled on Thursday that they were in no rush to raise U.S. interest rates, economists were bracing for the release of retail sales, consumer sentiment and inflation data.

"We know the manufacturing and the mining sectors in the U.S. are going through a tough time so it means that it is even more important for consumer spending to keep the economy going," said Rabobank economist Philip Marey.

In commodity markets, oil prices had trickled back above $47 a barrel after being sapped by data showing weak U.S. fuel demand.

"We've had a big sell-off across safe-haven and fixed income markets and that's partly because we've had such a strong rally, but also because there's been some genuinely positive news from other parts of the world this week," said Owen Callan, an analyst at Cantor Fitzgerald.