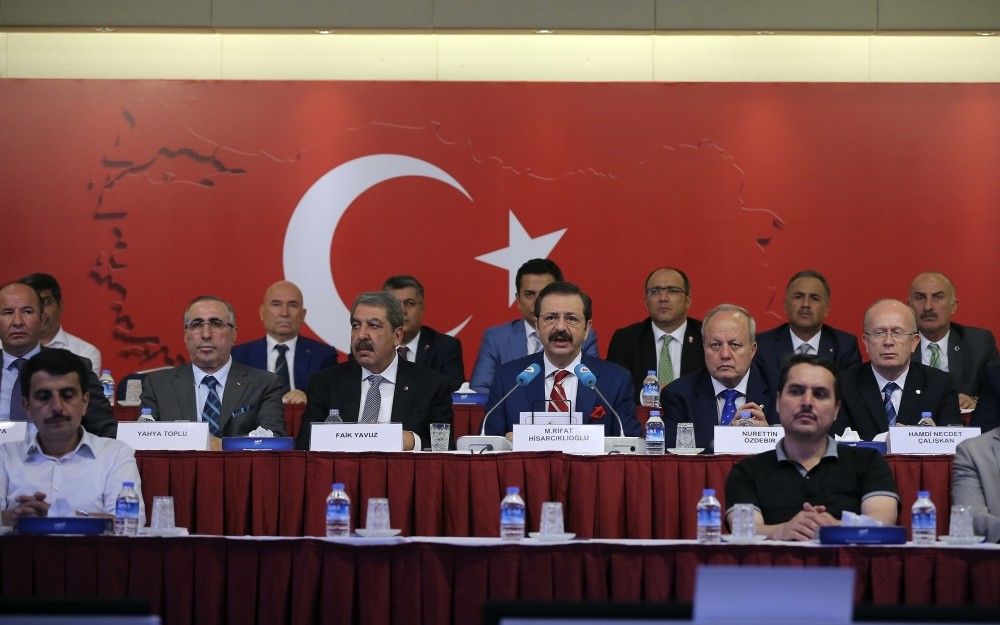 Reacting to the coup attempt on July 15, the Union of Chambers and Commodity Exchanges of Turkey published a joint notice, restating their commitment to produce more and protect democracy

The Union of Chambers and Commodity Exchanges of Turkey (TOBB) has said that it is time to work harder, produce more and provide more employment: "Just as in the past, we, as the TOBB and the 365 chambers and commodity exchanges, support democracy, our nation and state, both now and in the future."

Representing the country's private sector, TOBB published a joint notice on behalf of the presidents and executive boards of the 365 chambers and commodity exchanges of Turkey's 81 provinces and 160 districts. Indicating that they are unified in reaction to the coup attempt on July 15, TOBB, together with the presidents of chambers and commodity exchanges, stressed that everyone should be pleased that all the institutions in Turkey, including political parties, nongovernmental organizations and press agencies had protected democracy together.

Stressing the importance of unity, solidarity and a decisive stand by political parties and politicians against the attempted coup, the notice says that they are proud of Parliament's resistance to the coup perpetrators. Thanking all those who resisted and acted against this coup attempt, including the heroic security forces and in particular the honorable officers of the Turkish Armed Forces, the notice says they are proud of the will and bravery displayed by the heroic resistance to the weapons of the coup perpetrators by the people of Turkey.

Pointing out that they do not want a government that does not get its power from the ballot box or authority from the people, the notice says they do not see any option for Turkey other than democracy, and they expect this terrorist organization to be fully revealed and called to face justice.

Stressing that everyone should know the value of consensus within society in terms of democracy, the joint notice says the time has come for the nation to be stronger, hold each other tighter and love each other more, since "this is what makes us who we are, keeps us going and makes us a nation." Promising that they will not fall into the traps of those who want to drag our country into chaos and that the time has come to work harder, produce more and provide more employment, TOBB's notice promises to "support democracy, our nation and state both now and in the future, on behalf of TOBB and 365 chambers and commodity exchanges."

TOBB and private sector representatives promise to work more determinedly for the country and people, take Turkey to greater goals and work and produce nonstop for the country by keeping in mind Mustafa Kemal Atatürk's remarks: "Sovereignty unconditionally belongs to the nation." The notice adds that the public should stand shoulder to shoulder and remember the value of unity and solidarity and love, trust and believe in each other. In conclusion, the notice stresses that they do not recognize any will higher than that of the people, that they will not give up on democracy or accept any coup attempts, noting that the business community can continue only as long as the state, country, and all its people all continue only as long as democracy continues.
RELATED TOPICS