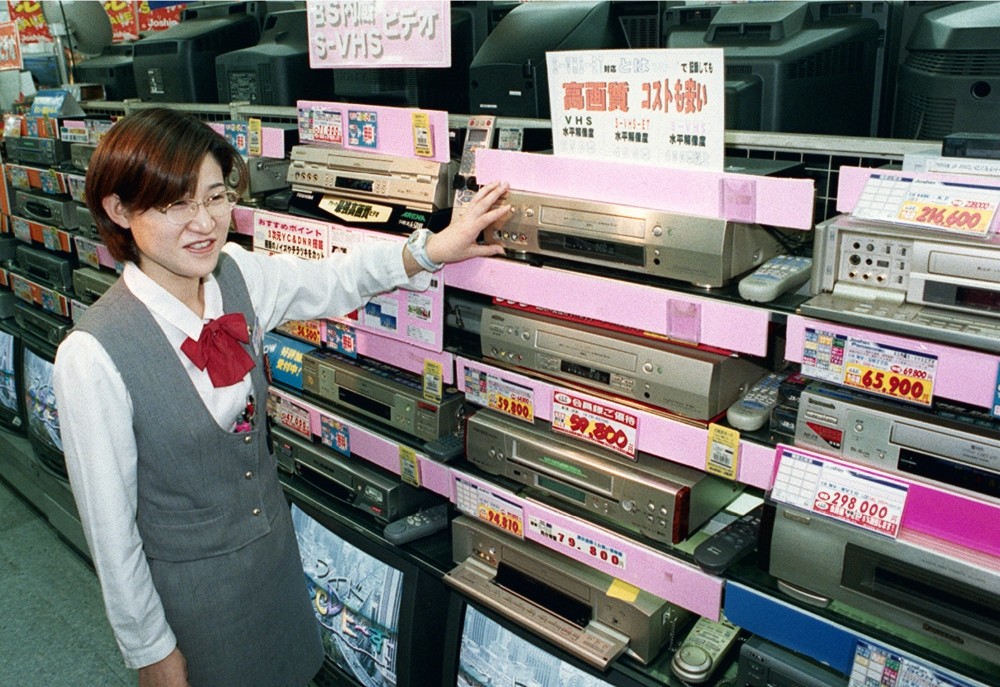 In this Oct. 31, 1998 photo, a salesclerk shows high quality VHS video casette recorders at a home and electrical appliance store in Osaka.
by Associated Press Jul 26, 2016 12:00 am
Japanese electronics maker Funai Electric Co. says it's yanking the plug on the world's last video cassette recorder. A company spokesman, who requested anonymity citing company practice, confirmed Monday that production will end sometime this month, although he would not give a date. He said the company wanted to continue production to meet customer requests, but can't because key component makers are pulling out due to shrinking demand for VCRs.

Many families and libraries have content stored in the VHS format and want to convert the tapes to DVD or other digital disks. They can do so using VHS/DVD converters, known as "combos" in Japan. Funai will be rolling out such products later this month, the spokesman said.

Funai's VCR factory, which is in China, is off-limits to media coverage for security reasons because other products are made at the same plant, he said. Funai began making videotape players in 1983, and videotape recorders in 1985. The company says they were among its all-time hit products. Last year, Funai made 750,000 VHS machines that played or recorded cassette tapes. In 2000, it made 15 million of them, 70 percent for the U.S. market, according to the company, based in Osaka, central Japan.

Other products have also grown outdated with the advance of digital and other technology. That includes film cameras and floppy disks once used to store computer content, which were displaced by smaller memory devices with larger capacity and by cloud storage.

Owners of VCRs are not as emotionally attached to their machines as are owners of Sony Corp.'s discontinued robotic dog Aibo, or the Boombox, the portable cassette player, with its deeply resonating speakers and cool designs, said Nobuyuki Norimatsu, nicknamed "Aibo doctor," of A-Fun, a company of engineers who do repairs for discontinued electronics goods. Still, many VCR owners want to dub their videos on their own, rather than sending them to outside companies, because the content is so personal, he said. "To give up on keeping such records is like denying the history of humankind," said Norimatsu. "Production ending is going to present problems for some people." Panasonic Corp. withdrew from making VCRs several years ago, making Funai the only manufacturer.

Funai will continue selling VCRs through its subsidiary until inventory runs out and will provide maintenance services as long as it can, the company spokesman said.

Videotapes can still be converted using VHS-DVD recorder-players made by other, mostly Chinese, companies. Secondhand products abound in Tokyo's electronics district as well. But a time may come when all such options also disappear.

But many are shrugging off the VCR's disappearance as inevitable.

"I think only hard-core fans of old machines are going to be using VCRs," said Isao Tokuhashi, author of "My Eyes Tokyo," a book about newsmakers in Japan.

Like most people, Tokuhashi invested hours 10 years ago to transfer video he wanted to keep to DVD, and these days stores video in his iPhone and computer. He no longer owns a TV and hasn't recorded any shows recently, he added. "None of my friends still has one," Tokuhashi said of the VCR.
RELATED TOPICS