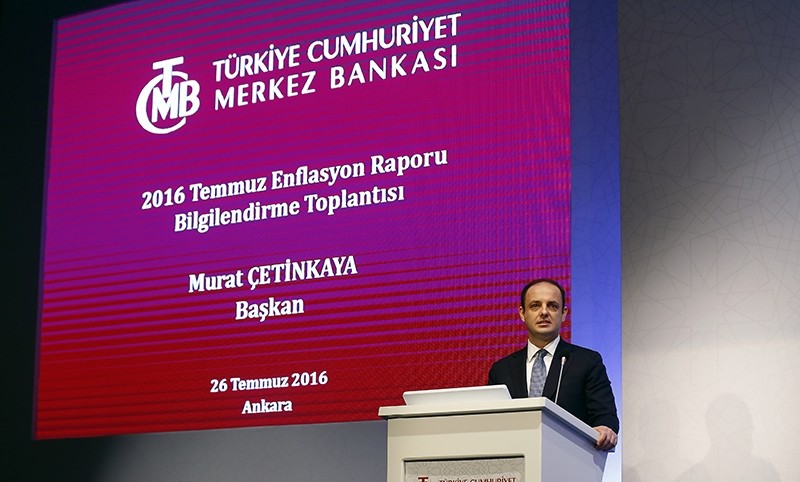 While leaving the inflation forecast for 2016 at 7.5 percent in line with the forecast of the government's Medium-Term Economic Program, Governor of the Central Bank of the Republic of Turkey (CBRT) Murat Çetinkaya ensured the markets that the CBRT will take all the necessary measures, watching closely the pricing behavior of markets.

Çetinkaya announced the third Inflation Report of the year on Tuesday, according to which, the inflation rate will fluctuate between 6.6 percent and 8.4 percent through the end of 2016. Moreover, Çetinkaya said, "The midpoint in 2016 will be 7.5 percent and 6 percent in 2017." Thereby, the CBRT held onto its previous inflation forecast for the following years as well, stating the inflation rate, which will decrease to 6 percent next year from this year's 7.5 percent, will stabilize at 5 percent in 2018.

In addition, the forecast for food inflation was revised down to 8 percent from 9 percent for the year-end.

Food inflation has recently become one of the biggest causes of the volatility and increases in yearly inflation, Economy Minister Nihat Zeybekci tweeted on Monday. Zeybekci said the government's support to the CBRT in fighting food inflation has been increasing, adding that it is the government's priority to closely watch the market pricing behavior shaping the increases in the food price levels in order to diminish the increasing effect of the food prices on inflation.

Furthermore, Zeybekci said the solution to the issue will be more visible as the concrete measures, which will curb the volatility in food prices, developed by the Food Committee are being put into effect over the following months. He said, thereby, food inflation will be closer to the targeted inflation level.

Meanwhile, the consumer price index (CPI), namely inflation, increased by 0.47 percent in June compared to the previous month with annual inflation up at 7.64 percent.

Turkey's gross domestic product (GDP) grew 4.8 percent in the first quarter of 2016 compared to the same period last year, making Turkey one of the fastest-growing economies in Europe as well as among Organization for Economic Cooperation and Development (OECD) members.

Çetinkaya's comments came almost 10 days after the bank stepped in to provide liquidity to the financial system following the deadly coup attempt on July 15 when rogue elements of the Turkish military tried to overthrow the country's democratically elected government.

He said that the bank does not have a nominal or real foreign exchange rate target.

Turkish markets shook off post-coup attempt losses on Monday, as the Borsa Istanbul soared and the Turkish lira recovered some of the losses it saw last week against the U.S. dollar.

The country's top economic officials, including PM Binali Yıldırım, have been trying to reassure investors that the July 15 failed coup will not cause permanent damage to the economy. Turkey's public debt is very low with around 35 percent of GDP in 2015, compared to over 60 percent in many European countries.

Çetinkaya also said the central bank's "simplification of the monetary policy", which aims to achieve a narrow and symmetrical corridor and provide funding via a single rate, would not have a negative impact on the performance of the local currency.

"The simplification will increase predictability, easing the risk premium," the governor said.

The CB cut the overnight lending rate by 25 basis points to 8.75 percent while it kept its benchmark one-week repo rate on hold on July 19 after a failed coup attempt on July 15.

"In order to preserve financial stability, the central bank acted cautiously in declaring support, if needed. Governor Çetinkaya further stressed that the bank is ready and willing to act upon its lender of last resort mandate, providing they have ammunition left in their policy frame-work," Yılmaz said.

"And they may recover from their depressed levels. Additionally financial stability ensures further credit growth supporting real sector and the economy in general," Yılmaz added.

"The expectation is based on the measures of government to stabilize the food prices, especially red meat prices," Erkan said.

"Although the risks of failed coup attempt, the CB expects the negative effects on financial markets to be limited; simplification policy will last for suitable time period and at the end of simplification, funding will be at a single policy level," Erkan said.

"We think that, the single interest rate should be based on the 12-month forward inflation expectations, in order to prevent the fragility which would be caused by negative real interest rate."

In the Quarterly Inflation Report released on Tuesday, the bank said: "The CB closely monitors market depth and prices and may take all measures required to maintain financial stability when necessary. The recovery in global risk appetite and the adopted measures are expected to render the spillovers from domestic uncertainty short-lived and limited."

The bank said in the report that the implementation of the planned structural reforms will significantly boost the growth potential, favorably affecting the risk sentiment towards the Turkish economy.

The central bank said its "medium-term fiscal policy stance is based on the Medium-Term Program projections covering the 2016-2018 period,"

Official figures showed on July 4, an inflation increase to 7.64 percent in June from 6.58 percent in May.

Factors cited in the report as driving inflation higher in the second quarter of the year were the energy prices and food prices.

Economy is expected to maintain a steady growth

The report noted that recent terrorist attacks and domestic developments pose a downside risk to economic activity especially through the tourism sector.

"On the other hand, the economy is expected to maintain a steady growth path amid structural arrangements and investment incentives," it said.

The report noted that, economic growth is expected to be driven mainly by domestic demand in 2016.

"Notwithstanding substantial wage hikes, the favorable course of employment will continue to support consumption via the income channel. Private investments are expected to edge up in the second half of 2016 on the back of domestic demand conditions and the modest global growth," the report said.

The bank's crude oil price assumption was increased to $44 from $40 per barrel, as Turkey was seeing immediate benefits from sudden decline in crude oil prices in recent years. Turkey's current account deficit has improved and inflation rates have also been reduced.

The fall is also to continue to bolster the Central Bank's efforts to cope with price stability, as Turkey channeled "energy import cost" into investments and consumption, boosting the country's economic growth in the medium term.

"Global financial markets and capital flows remain highly volatile. Despite the recent slight rise in the risk appetite, persisting concerns over global growth and uncertainties in global monetary policies feed into volatility. The bank will closely monitor the developments in both global and domestic markets and take necessary stabilizing measures by utilizing its large variety of tools," the report said.

"Sustained fiscal discipline has become essential in reducing the sensitivity of the Turkish economy against external shocks in recent years. In the current environment of highly uncertain global markets, the gains from maintaining and further advancing these achievements are significant. Any measure to ensure the sustainability of fiscal discipline and reduce the savings deficit will support macroeconomic stability and contribute positively to social welfare by keeping interest rates of long-term government securities at low levels," the report added.