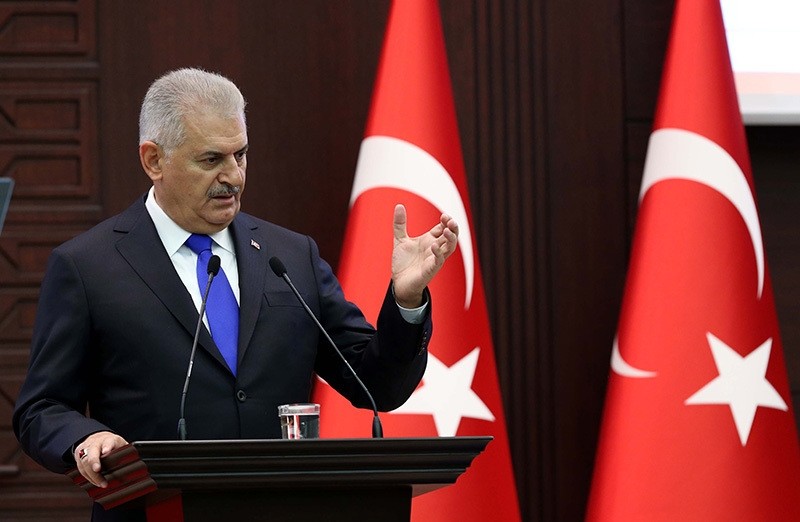 The 2016 growth expectation has been revised to 3.2 percent, having been initially announced as 4.5 percent, Prime Minister Binali Yıldırım said in a press conference in which he announced the new Medium Term Economic Program for the period of 2017-2019 yesterday in Ankara.

Yıldırım pointed out that that this figure was twice as much as the world average. The prime minister noted that 3 or 4 percent growth rates would not be their aim, however, as global problems affect the Turkish economy as well. "We will increase our growth rates in the 2017-2019 term. This is our essential target," Yıldırım added.

Statistics show that last month Turkey's economy grew 3.1 percent in the second quarter, slowing sharply from the strong figure of 4.7 percent in the first quarter.

The International Monetary Fund (IMF) also released its global forecasts on Tuesday, in which the estimation for Turkey's growth rate was cut from 3.8 percent to 3.3 percent in 2016 and from 3.2 percent to 3 percent in 2017. Although the IMF kept its earlier global output projection for 2016 unchanged at 3.1 percent, it downgraded forecasts both for growth in global trade volume and for advanced economies' output.

Yıldırım announced five strategic moves to be implemented while reviving the goals specified in the government's medium-term program. According to Yıldırım, these moves are "developing human capital, activating the labor market, enhancing technology and innovation capacity, strengthening physical infrastructure, and improving institutional quality."

This year's forecast for inflation remained unchanged at 7.5 percent, whereas Yıldırım said that the expectation for 2017 is 6.5 percent and for 2018 is 5 percent.

"Despite all the odds, we have managed to keep the budget deficit under 1.6 percent this year, which is a great success. We deliberately aim for 1.9 percent next year, but we will return to lower figures in 2018," Yıldırım said.

Touching on the increase in the budget deficit, Development Minister Lütfi Elvan stated that the main reason for the increase to 1.9 percent is the substantial increase in investments slated for 2017. Recalling that the share of investments in gross domestic product was 2.3 percent at the initial appropriation in 2016, Elvan said the share will increase to 2.8 percent in 2017, with TL 67 billion worth of capital expenditures and about TL 11 billion worth of capital transfer.

Speaking to reporters following the announcement of the medium-term program, Finance Minister Naci Ağbal said, on a question regarding the resources to be transferred to the budget from privatizations, that TL 15 billion ($5 billion) worth of privatization revenue is expected as of the year end, and TL 13 billion next year. Noting that export incentives will be increased, Economy Minister Nihat Zeybekçi said that additional export and import support premiums will be provided to match the increase in 2017 compared to 2016.

Turkish Eximbank's incentive budget will be tripled according to the new plan to support exporters. According to the program announced on Tuesday, the year-end export level is expected to be around $143.1 billion, which was $143.9 billion in the previous year, while the import level is forecasted at $198 billion, down from $207 billion in 2015. The exports and imports aim to hit $153 billion and $214 billion, respectively, in 2017.

Structural reforms and fiscal discipline will again be at the core of the new program.

The prime minister did not directly refer to the July 15 failed coup and the plunge in tourism following terrorists attacks and the crisis with Russia this year, which economists expect to have eaten into Turkey's GDP growth in 2016.

Turkey has enjoyed robust growth for much of the last decade, which was one of the key achievements of the ruling party of President Recep Tayyip Erdoğan, and the source of much of his popularity. Erdoğan is banking on strong growth in the next years to realize his strategic target of making the country one of the world's top 10 economies by 2023.