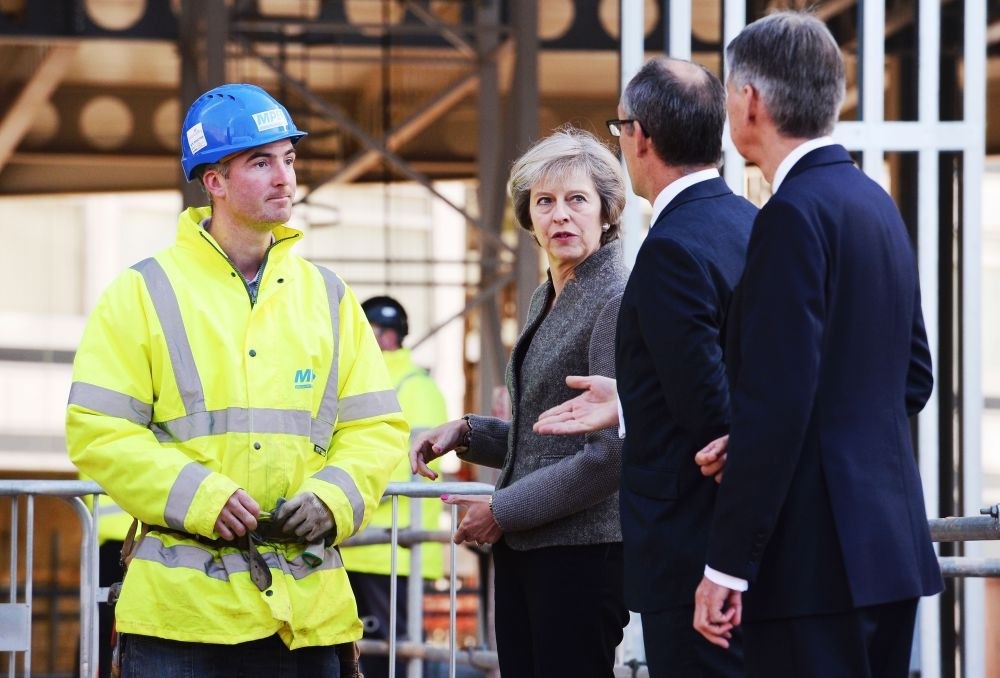 British Prime Minister Theresa May (2L) and British Chancellor of the Exchequer Philip Hammond (R) visit a construction site where new HSBC offices are being built in Birmingham Monday.
by Oct 04, 2016 12:00 am

Sterling slid to a three-year low against the euro Monday after Prime Minister Theresa May set a March deadline for the formal departure process from the European Union to begin, sending British shares to a 16-month high.

May told her Conservative Party's annual conference on Sunday that she was determined to move on with the process and win the "right deal", in a move to ease fears inside the party that she may delay the divorce. May said she will invoke Article 50 no later than the end of March next year, referring to the EU's Lisbon Treaty that formally puts the divorce proceedings between the EU and Britain in place. This means she kicks off the negotiations process before the French and German elections next year and implies the two-year Brexit clock triggered under Article 50 will wind down by March 2019, a year before Britain's next general election.

While the March deadline offers some clarity to the process and underpinned stocks, many in the market worry that the government's stance points to a so-called "hard Brexit" that would see the UK left outside the single market in favour of strict controls on migration.

Though the economy has shown resilience post-referendum, fears of a slowdown in business investment and the wider economy will undermine the pound and the focus turns to possible further easing by the Bank of England in the coming months.

Sterling fell 1 percent to $1.2845, its weakest since early July and not far from the 31-year low of $1.2798 struck on July 6, just days after the June 23 referendum on EU membership. It hit a three-year low against the euro.

"For market participants the key soundbite was that regaining control over EU immigration into the UK would be the priority ahead of membership of the single market," said Shilen Shah, bond strategist at Investec Wealth and Investment. "Sterling has the potential to come under further pressure given the probable stalling of foreign direct investments."

Investors worry a "hard exit" from Europe's single market or what the Royal Bank of Canada dubbed as "Smexit" - or single-market exit -- will drag Britain into a recession and blow out its ballooning current account deficit, already among the highest in the developed world. A wider current account gap and slowing foreign investments tends to be a drag on the currency. "May's stance is a reminder that uncertainties related to "Smexit" turbulence could be costly for the economy in the short run," said Sam Hill, RBC Capital Markets senior economist.

For now though, sterling's weakness was helping British exports and the economy. Data released on Monday showed factory activity grew at the fastest rate in more than two years last month. September's factory PMI exceeded all forecasts in a Reuters poll of 28 economists, and suggested manufacturing growth in the third quarter will be the strongest so far this year.

The index had fallen sharply after the June vote, but has since recovered and is up nearly 10 percent, thanks to the large number of internationally facing firms listed that have benefited from a fall in sterling.

"As a result of Prime Minister May's announcement ... the pound has weakened significantly, which is actually seen as a good thing by the FTSE 100 as it's quite an export-heavy index," said Henry Croft, Research Analyst at Accendo Markets.

British government bond prices rose slightly while expectations that the BOE could ease policy in February rose just a bit, pricing in the swaps market showed.