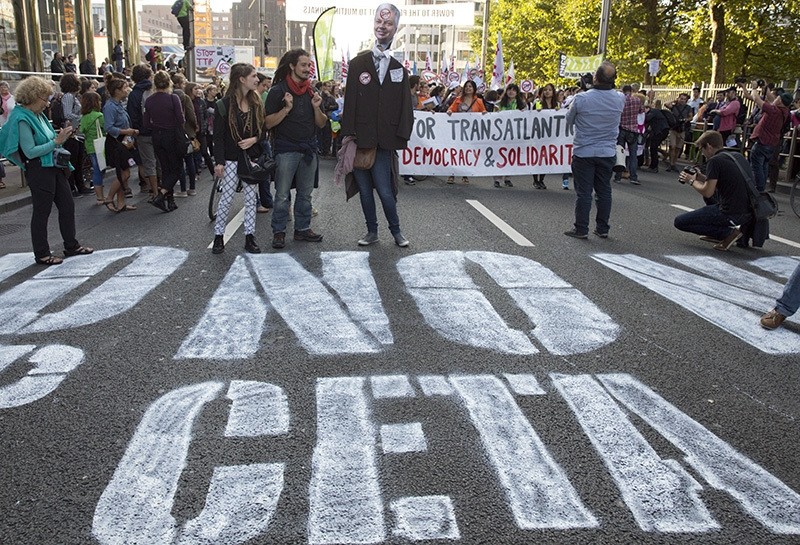 In this photo taken on Tuesday, Sept. 20, 2016, demonstrators walk over a spray painted sign on the street during a demonstration against international trade agreements in Brussels. (AP Photo)
by Associated Press Oct 14, 2016 12:00 am

A Belgian region on Friday rejected a wide-ranging trade deal between the European Union and Canada, threatening the agreement which is supposed to be signed in two weeks and requires unanimous approval.

Paul Magnette, the leader of the region of Wallonia, said he would "not give the full powers to the federal government" to back the deal at an EU meeting Tuesday, where the 28 member states have to decide on full approval of the agreement.

Wallonia, a francophone region of 3.5 million in the south of Belgium, fears the deal with Canada will leave the farming and industrial sectors too exposed to cheaper imports from Canada. Environmental activists and trade unions have all warned such international deals could worsen local standards for food, work and industry.

Magnette said that "the guarantees are insufficient" and said labor, environmental and legal standards needed to be improved before such a deal could be approved. "We have to say 'no' so we can negotiate," Magnette said. The regional legislature rejected the deal by a 46-14 margin, with one abstention.

All EU nations need to back it, and under Belgium's byzantine constitutional rules to appease different linguistic blocs, one region can effectively veto such a deal for the whole country.

"I will not give the full powers to the federal government and Belgium will not sign CETA on the 18th of October" Magnette said.

The agreement has already been backed by an overwhelming majority of the 28 member nations of the EU, a bloc of half a billion people. It is scheduled to be officially signed at an EU-Canada summit in Brussels with Canadian Prime Minister Justin Trudeau on Oct. 27, seven years after talks started.

The Belgian national government and the dominant Dutch-speaking region on Flanders back the deal.

The Liberal MR party, which is also represented in the national government, was scathing. "You are taking Belgium and Europe hostage," said Virginie Defrang-Firket in the legislature. "Nobody will trust us anymore," she said.

The EU says the Comprehensive Economic and Trade Agreement deal with Canada will improve trade, create jobs, and remove just about all tariffs and custom duties while at the same time guaranteeing European standards on anything from food and health quality to labor rights.

For many, the CETA is only a prelude to an even bigger free trade deal, called TTIP, that is being negotiated with the United States, and which has given rise already to massive protests in several member states, including Belgium — and Wallonia.

Talks are planned ahead of Tuesday to see to whether Wallonia might withdraw its rejection.