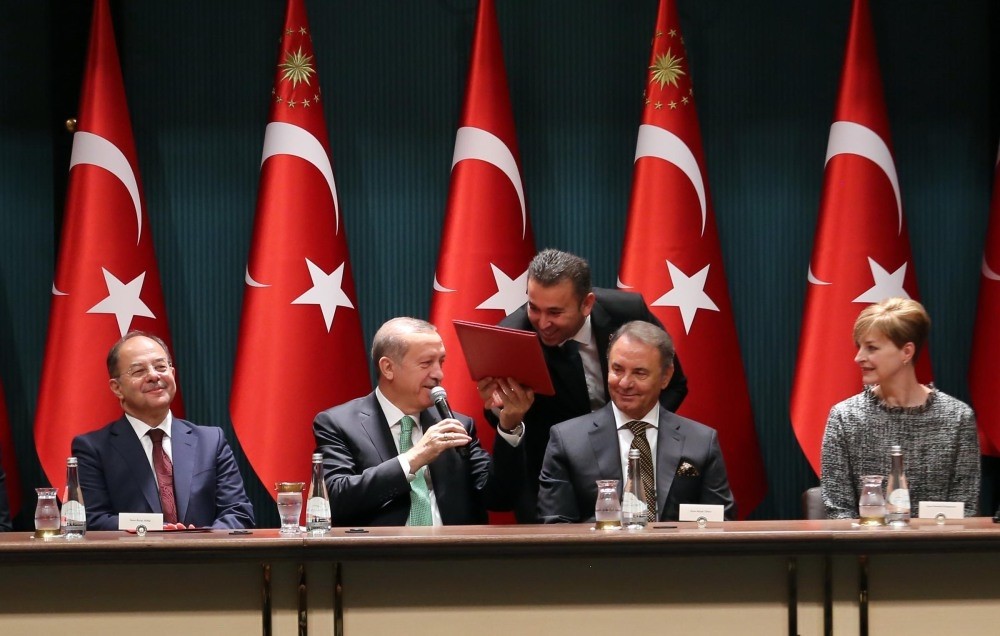 The U.S.'s OPIC, Export Development Canada and the European Bank for Reconstruction and Development will provide credits with 18-year terms for Turkey's two new city hospitals in İzmir and Kocaeli

The signing ceremony on the financing of $1.1 billion worth of external financing agreement, which has been jointly provided by Gama Holding, Türkler Holding and General Electric for İzmir and Kocaeli city hospitals, was held at the Presidential Palace yesterday. President Recep Tayyip Erdoğan said Turkey will proceed on its way to achieving its objectives despite the ongoing wars and crises in neighboring countries during the ceremony. General Electric Turkey President Canan Özsoy stated that it is a great source of pride to actualize hospital campuses in two important Turkish cities, adding that all partners are fully committed to the agreement with Turkey. Özsoy said that credits with 18-year terms have been provided by the U.S.'s Overseas Private Investment Corporation (OPIC), the Export Development Canada and the European Bank for Reconstruction and Development (EBRD). Turkey's state-owned banks Ziraat and Halk, and private İş Bank were also among the contributors. OPIC Regional Director Danielle Montgomery said that the agreement is a concrete sign of the U.S.'s friendship with Turkey and the Turkish people. Montgomery said that the $250 million provided by OPIC means more than just a hospital investment but a sign of trust in Turkey's future. So far, Turkey has carried out tenders or agreements on 21 city hospitals in different parts of the country.

These projects include the construction of hospitals that have $22.237 billion worth of investment value. The hospitals, which have 30,691 beds in total, are being constructed on indoor areas of more than 9,000 square meters. Additionally, two hospital projects are going through a tender process, four others await approval from the High Planning Council, and two others are undergoing feasibility studies. In sum, Turkey will actualize 29 city hospital projects with a capacity of 41,000 beds and an investment amount of TL 30 billion. The government will begin inaugurating hospitals as of 2017 and plans to put all of them into service by 2019.

The external financing agreement on İzmir and Kocaeli city hospitals covers nearly $637 million out of a total of $1.1 billion.

Erdoğan said, "Turkey will be one of the countries having a say in the region and the world in the health sector which is one of the most important sectors of the future. We aim that these investments will make our country one of the five most important health tourism centers in the world."

Health Minister Recep Akdağ also announced that city hospitals will have 41,000 beds capacity in total. Deals for 30,600 beds have been signed so far and the rest will be tendered in the upcoming months.

City hospitals, mainly built in suburbs, aim to improve health standards by significantly increasing the hospital bed capacity and addressing the shortage of doctors. These large hospital complexes will provide services in a diverse range of medical specialties not available in a single hospital in many cities. To ensure the quality of services, the government has adopted a public-private partnership model in the construction and operation of the complexes. City hospitals will be leased to private companies, and the government will only pay fees for medical imaging, laboratories, security, maintenance and healthcare worker salaries.

In recent years, Turkey has taken steps to ameliorate the crumbling healthcare system. Hospitals run by the Health Ministry and Social Security Fund (SGK), formerly known as the Social Insurance Fund, were merged to prevent overcrowding in the latter. The government also cut red tape in the treatment of patients with social security at teaching hospitals. Existing hospitals were modernized, and more than 500 new hospitals were opened all across Turkey.
RELATED TOPICS