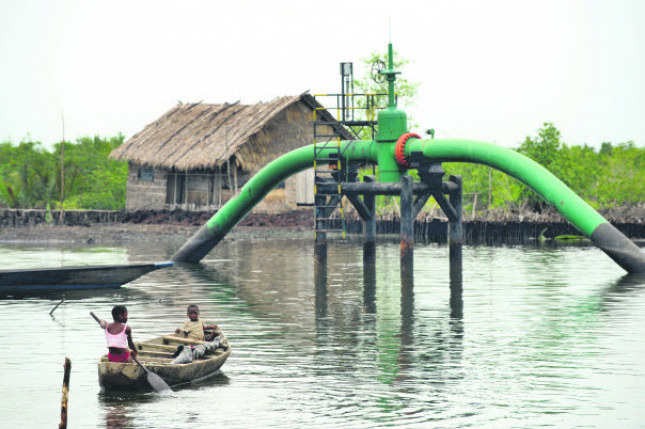 About 1,200 African businesspeople are set to visit Istanbul to meet their Turkish counterparts in a platform aiming to create a long-lasting cooperation. The Turkey-Africa Economic and Business Forum will be held in Istanbul tomorrow

International business leaders will meet for two days in Istanbul Tuesday at the Turkey-Africa Economic and Business Forum, which highlights Turkey's strategy to enhance bilateral trade and economic relations with the African continent. Around 1,200 African businesspeople are expected to attend the program. The forum, jointly organized by the Turkish Ministry of Economy, the African Union Commission, the Foreign Economic Relations Board (DEİK) and the Turkish Exporters Assembly (TİM), aims to provide a platform for the business circles of Turkey and African countries to create a long-lasting cooperation, according to the forum's official website.

President Recep Tayyip Erdoğan will deliver a speech at the forum along with President of Chad Idriss Deby Itno, who also serves as chairperson of the African Union. The Union represents 54 countries in Africa.

The two-day program will involve informative sessions about doing business in Africa. African and Turkish businesspeople will also meet for business to business (B2B) meetings.

"Leaders of the African industry and business people will have business-to-business (B2B) meetings and there will be a lot of opportunities for both sides," Taşkın said. Taşkın added that Turkish investors who had been doing business exclusively in North African countries were focusing on sub-Saharan Africa. Since Turkish firms have gained a lot of experience in the energy sector, they were ready to aid the African countries suffering from a lack of electricity, said Taşkın.

Since 2005, opportunities for creating equal level cooperation between Turkey and African countries have been enabled. The first aim in this direction was to increase the number of Turkish diplomatic missions in Africa. The Republic of Turkey, with the Turkey-Africa Cooperation Summits, the first of which was in August 2008 and the second in November 2014, manifested its desire to increase the level of cooperation with all African countries. In 2010 Ankara accepted its Africa Strategic Document. With this document Ankara put forward its approach of "solidarity for a common future." It explained what should be done in the near future and read: "The steps that have been taken by Turkey as a state strategy have to expand into the civil level of cooperation for them to become more established and to be carried into the future. In fact, it is more important to prioritize civil cooperation for the future of Turkish-African relations."

In West Africa, electricity access rates range from below 20 percent in Liberia, Sierra Leone, Niger and Burkina Faso to more than 50 percent in Senegal and above 70 percent in Ghana. More than 90 million people in Nigeria, i.e. 55 percent of the population do not have access to grid.

The continent cannot meet its energy demand and has difficulties to produce enough oil, natural gas and electricity due to lack of technology and poor infrastructure. The continent has 7.6 percent of the proven global oil reserves, which amounts to 129.1 billion barrels, according to a BP report.

Around 40 percent of oil and natural gas exploration was done on the continent in 2015, according to a Turkish Petroleum report. The U.S.-based oil giants ExxonMobil made a significant oil discovery in the Owowo offshore field in Nigeria with a potential recoverable resource between 500 million and 1 billion barrels of oil, the company announced Thursday.
RELATED TOPICS