Economy Minister Zeybekci: The future will be in Africa 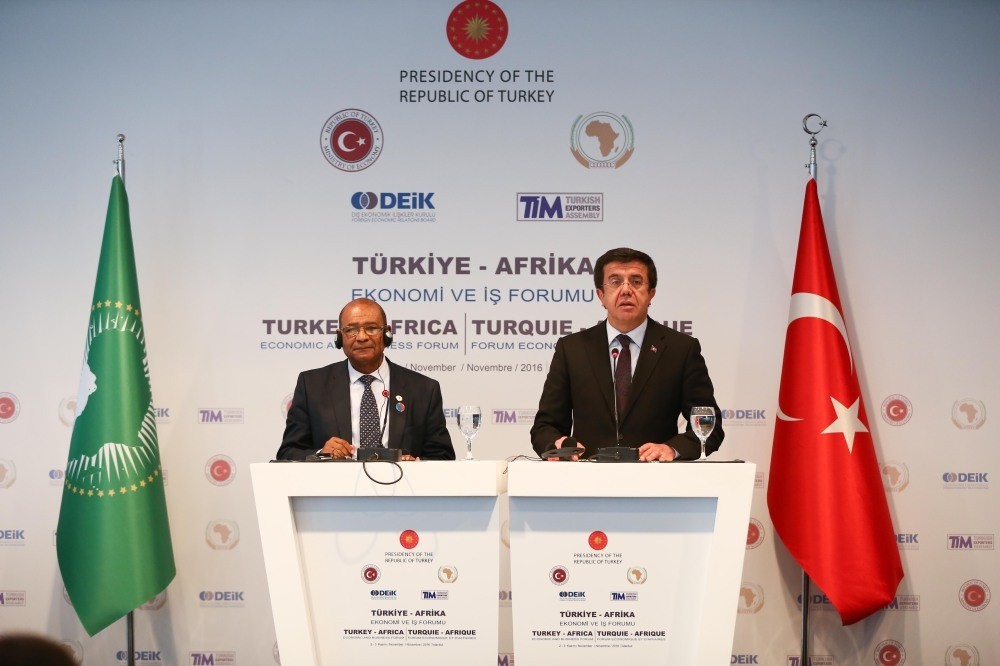 1,200 Africans from 42 countries visited Istanbul to attend a special forum focusing on enhancing bilateral trade and economic relations. As deals were signed to ensure the realization of this goal, Minister Zeybekci claimed that the future will be in Africa

At the Turkey-Africa Economic and Business Forum that gathered 1,800 Turkish and African businesspeople in Istanbul, Turkey's Economy Minister Nihat Zeybekci said the future will be in Africa. Around 1,200 businesspeople from 42 African countries visited Turkey to attend forum.

International business leaders have met for two days in Istanbul, which highlights Turkey's strategy to enhance bilateral trade and economic relations with the African continent. The forum, jointly organized by the Turkish Ministry of Economy, the African Union Commission, the Foreign Economic Relations Board (DEİK) and the Turkish Exporters Assembly (TİM), aims to provide a platform for the business circles of Turkey and African countries to create long-lasting cooperation, according to the forum's official website.

Yesterday, on the second day of the event, a special meeting focusing on infrastructure and energy projects in Africa was held. Minister Zeybekci said that financing these projects, sharing technology and know-how and creating a transparent investment environment for investors were the key issues of the discussion.

Some intergovernmental deals have been signed during the program, which are found to be fruitful according to Commissioner for Economic Affairs of the African Union Anthony Mothae Maruping. Referring to the agreements and business-to-business (B2B) meetings held between Turkish and African businesspeople, Maruping said he is grateful to President Recep Tayyip Erdoğan for ensuring a win-win partnership between Turks and Africans.

A joint communique was also declared at the end of the program, which is planned to be reorganized in Africa in 2018.

"In the spirit of closer relations between Turkey and African countries, and considering the substantial momentum in Turkey-Africa relations, particularly since the declaration of Turkey as a strategic partner of the African continent in 2008 and the first and second Turkey-Africa Partnership Summits held in Istanbul in 2008 and in Malabo in 2014 respectively, it was agreed that it is prime to advance African-Turkey cooperation and build on what has been accomplished thus far," the communique wrote.

Turkey and African participants of the forum agreed on taking action according to the Agenda 2063. Agenda 2063 is both a vision and an action plan belonging to the African Union. It is a call for action to all segments of African society to work together to build a prosperous and united Africa based on shared values and a common destiny, according to the information shared in the Union's website. The Union represents 54 countries in Africa. The Forum pledged that a Turkey-Africa partnership should be affected within the context of Agenda 2063's first ten year implementation plan.

"The forum noted with satisfaction that the Turkey-Africa partnership is growing, strengthening, deepening and getting diversified and the readiness of the Turkish side to further intensify the economic and commercial ties with African countries," the final communique noted.

The changing policy has also offered new opportunities for both Turkish and African businessmen. The trade budget with the continent passed $25 billion, up eightfold from 13 years ago. Ankara has signed economic cooperation agreements with 38 countries and has established free economic zones with four.
Last Update: Nov 04, 2016 1:06 am
RELATED TOPICS