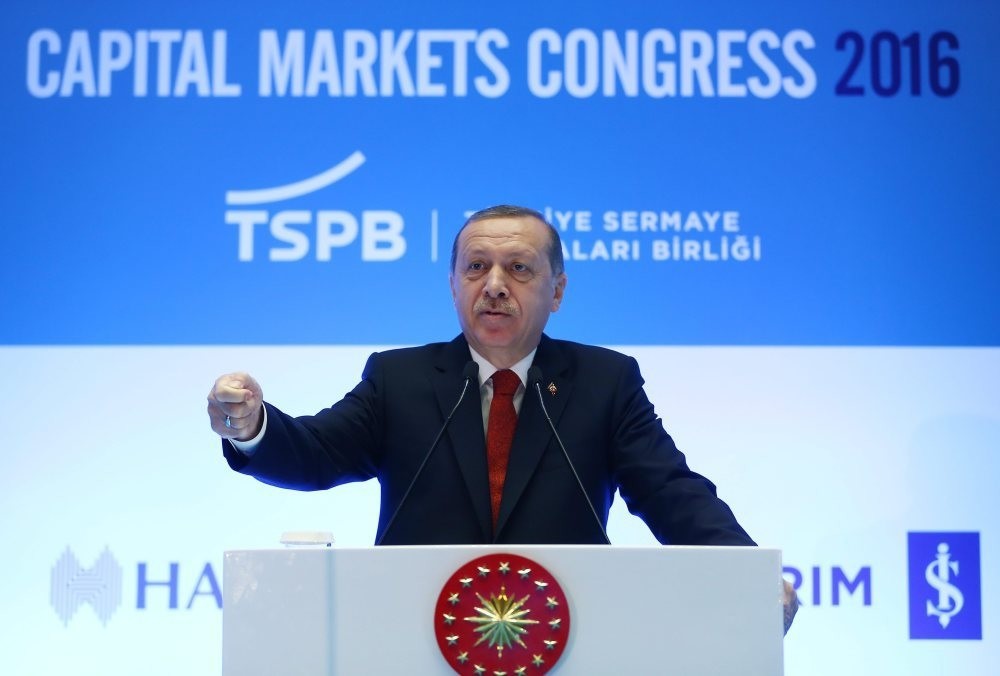 President Erdoğan warns about high interest rates that make it impossible for investors to advance into the market, urging capital markets to take measures to help alleviate the concerns of investors

Pointing out that interest rates have maintained a level of around 15-16 percent in Turkey, President Recep Tayyip Erdoğan said it was not possible for investors to get into the market with these high rates, and stressed that steps should be taken by capital markets to remedy the situation.

Speaking during the Capital Markets Congress held at the Wyndham Hotel in Istanbul, President Erdoğan said interest rates in Turkey were "quite high" and measures should be taken to help alleviate the concerns of investors.

Recalling that when the global financial crisis started, he foresaw it would only slightly touch Turkey, Erdoğan said Turkey overcame this crisis period with record-breaking growth rates, except during the recession in 2009.

Erdoğan stressed that Turkey's current situation was "way better" than most countries, particularly in Europe. He said Turkey's location was very close to the crisis zones in the Middle East, North Africa, Caucasus and the Black Sea. The president suggested that each development in neighboring Syria and Iraq is of particular interest to Turkey.

Urging the attendants to act in unity for Turkey's development, Erdoğan said that the finance sector should keep its money in a safe and not launch it into the market, comparing it to hiding money under a mattress.

Erdoğan said that Istanbul, as a finance center, will "without a doubt" compete with international finance centers. Along with its impending stages, another step will be taken in Islamic finance, which will open a new door for those who do not want to invest their money in interest rates, adding that it is crucial for participating companies to take their places in this sector.

Recalling that interest rates in the U.S. and Europe maintain a level around 0.50 percent while Japan and Israel stand at negative levels, Erdoğan said Turkey's rates were around 15-16 percent, which will make it impossible for investors to advance into the market.

Erdoğan said it took "too long" for the sovereign wealth fund to be put into effect, suggesting that the assets that will come forward with the wealth fund will increase Turkey's power on both national and international basis.

An interest rate-based global financial system should be put into a new orbit along with conscientious financial instruments such as Sukuk and infrastructure real estate investment partnership, Erdoğan said, adding that making money out of investments instead of interest rates is not only a conscientious model but also a sustainable one.

"We should dwell on it. I do not think that countries that do not bring out these financial instruments will be able to get out of their current crises for a long time," President Erdoğan said. Suggesting that the biggest obstacle before investment is high financing costs in this period, Erdoğan said investors should access finance at a reasonable price. "Banks took serious steps in interest rates. This downward trend must continue, and hopefully it will," Erdoğan said. "It is highly meaningful and important for our banks to make these rational decisions. No offence but there is those who almost compete with pawnbrokers."
RELATED TOPICS