Egypt borrows $12 billion from the IMF 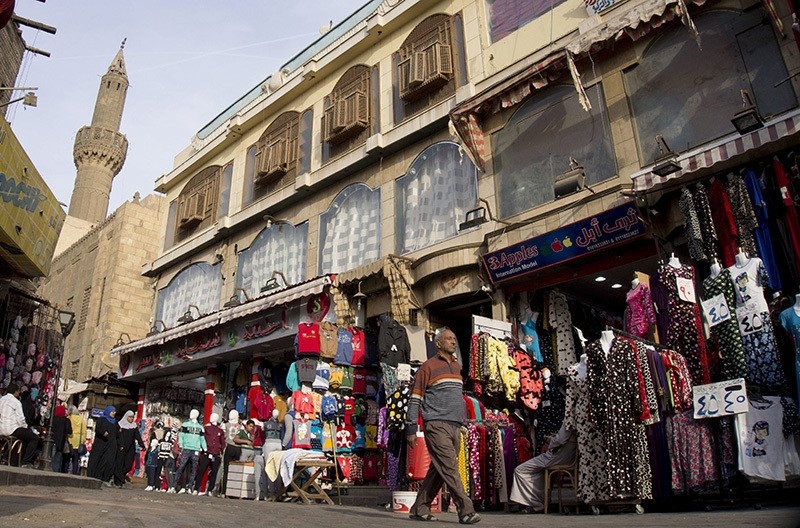 An Egyptian walks in a popular market in Cairo, Egypt, Friday, Nov. 11, 2016. The government has floated the local currency and raised fuel prices in order to qualify for a $12 billion bailout loan from the International Monetary Fund. (AP Photo)
by Associated Press Nov 11, 2016 12:00 am

The International Monetary Fund said on Friday that its executive board has approved a three-year bailout totaling $12 billion to Egypt, to support the country's ailing economy — a move intended to restore investor confidence and raise the country's foreign reserves. Even with the loan, economic challenges remain ahead.

The approval comes almost a week after the Egyptian government floated its currency and raised fuel prices in order to qualify for the loan. These painful measures earned praise from the IMF and the international business community, but caused price hikes for an already frustrated cash-strapped population, with President Abdel-Fattah el-Sissi now risking a serious political backlash.

The IMF made the announcement on Friday and said the loan aims to help Egypt "restore macroeconomic stability and promote inclusive growth." It added that Egypt will receive a first installment of $2.75 billion immediately.

Days earlier, Christine Lagarde, the IMF chief, described Egypt's reform program as "ambitious" and said it will put the country on a "sustainable path and achieve job-rich growth."

Tarek Amer, the head of Egypt's Central Bank, was quoted by the state-run MENA news agency as saying that the first installment has arrived at the bank and increased foreign reserves to $23.5 billion. Egypt had $36 billion in reserves before the 2011 uprising. The government announced earlier that it's targeting an additional $7 billion loan annually from other lenders in order to secure over 30 billion of funds needed in the coming three years.

Years of unrest following the ouster of longtime autocratic President Hosni Mubarak in 2011 left Egypt's economy in shambles. The vital tourism sector dried up over fears of terrorism, overseas remittances dropped because of low oil prices, and Suez Canal revenues diminished because of a decline in global trade. Investment and business activity also stalled, with inflation hitting 14 percent and unemployment 13 percent while the percentage of the unemployed youth is around 30 percent. Nearly half of the population is below poverty line; the budget deficit currently stands at nearly 12 percent of gross domestic product while the current account deficit is at almost 7 percent.

A country with at least 90 million people, Egypt is heavily dependent on imports, not just of staple food items, but industrial components and raw materials to keep the manufacturing sector going. Much of the imports needed by the private sector are financed by dollars bought on the black market.

Before devaluation, a thriving black market led the dollar to surge to a rate of 19 Egyptian pounds — compared to 8.8 in the banks. Egyptians witnessed some tough scenes as a result: like mothers holding crying babies and angry men blocking a Cairo main street over a shortage of subsided baby formula. Basic commodities like sugar all but disappeared from shops, and international airlines such as the Royal Dutch Airlines suspended operations over heavy restrictions imposed by the Central Bank on the transfer of foreign currency out of Egypt.

For decades, Egyptian leaders have balked from sealing IMF loans for fear of the social unrest. In preparation for the painful measures, the government launched a public campaign on TV and with billboards and street signs. The campaign's main slogan is: "Oh, Egypt, with bold reforms, we shorten the road."

However, the public campaign has failed to quell public rage caused by prices hikes. El-Sissi faced serious criticism for failing to live up to his promises, foremost that of improving living conditions. The army chief-turned-president led the military ouster of Islamist President Mohammed Morsi followed by a heavy security crackdown on large protests.

Some of the criticism was also directed at el-Sissi's mega projects for wasting millions of dollars . These included expansion of the Suez Canal, building a new administrative capital, reclaiming 1.5 million acres in the desert, a nationwide network of roads, and the construction of cheap housing.

A call for mass protests dubbed "the revolution of the poor" against the latest economic measures faltered on Friday as Egyptian security forces heavily deployed on the streets of Cairo and across the country. Authorities have banned all unauthorized demonstrations and have routinely responded to protests with lethal force.

Political parties for the most part distanced themselves from the Friday protest call, and authorities have accused Islamist groups like the banned Muslim Brotherhood of engineering the protests to cause chaos.

In a set of Q&As posted on the IMF website, the organization said that it hasn't demanded that Egypt cut food subsidies, and that the government is planning to increase expenditure on food and cash given to the poor and low-income families.

"The IMF supports the authorities in looking to reprioritize within the budget to protect vulnerable and poor households from the impact of food inflation," it said. "Social protection is a cornerstone in the government's reform program."

The latest measures, the IMF said, will cause short-term inflation.

"The move to a flexible exchange rate could increase inflation as imports will become more expensive," it said, but added that the impact will be limited and that the Central Bank is working to keep inflation "under control."

Cairo called on the U.S.-based global lender as a last resort, after having exhausted billions of dollars in aid from wealthy Gulf Arab nations recently humbled by declining oil prices — and now turned off by persistent bureaucratic hurdles to investing in Egypt.

The loan also comes at a time when oil-rich Saudi Arabia has piled pressure on Cairo, following disputes over regional conflicts such as those in Syria and Yemen. Saudi's Aramco, the world's largest oil company, has indefinitely halted much-needed fuel shipments to Egypt.