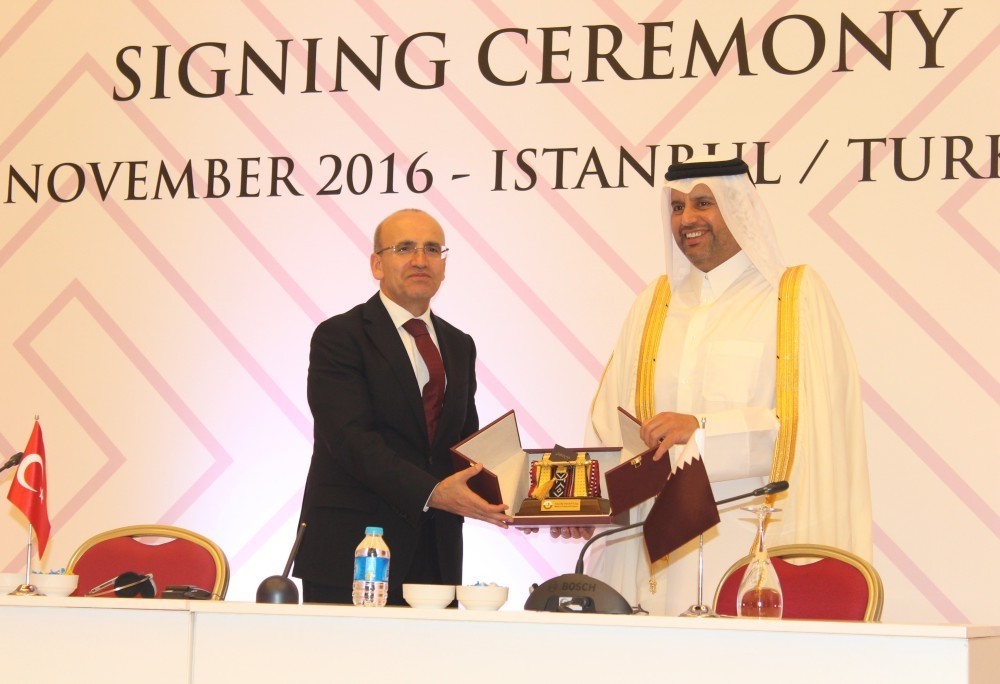 During his two-day visit to Turkey, Qatari Economy Minister al-Thani held meetings to prepare suitable ground to improve trade ties between the two countries as the number of Turkish companies operating in Qatar increases

Qatari Economy and Trade Minister Sheikh Ahmed bin Jassim al-Thani, delivering a keynote speech at the 20th International Business Forum (IBF), said they wanted to prepare suitable ground for Turkish and Qatari businessmen and discover trade and investment opportunities between the two countries. He added, "It would benefit both countries and their people to establish cooperation in all sectors and areas."

The 20th IBF, which is being simultaneously held with the Independent Industrialists and Businessmen Association's (MÜSİAD) MÜSİAD EXPO and High Tech Port by MÜSİAD fairs, has kicked off at WOW Hotel, Istanbul. This year's IBF, where Anadolu Agency (AA) is a global communication partner, features the theme of "Innovation Economy and Investment Ecosystem."

Touching on the benefits of business talks between Turkey and Qatar, al-Thani highlighted that they want to prepare ground suitable for trade and investment for Turkish and Qatari businessmen. He said the establishment of cooperation in all sectors and areas will benefit both countries and their people.

Referring to the deep-rooted relations between the two countries, al-Thani stated these relations have increasingly improved in the recent period through the efforts of Turkish and Qatari leaders. He stressed that the meeting was of critical importance for the creation of a strategic high council and the improvement of cooperation between Turkey and Qatar, adding that the bilateral trade volume has risen.

Stressing that a great number of cooperation agreements were signed between Turkey and Qatar, al-Thani said, "These ensure a sustainable trade volume and program. We are striving to hold more meetings in Doha in order to further promote relations between Turkey and the Gulf Cooperation Council (GCC)."

Al-Thani emphasized that innovative approaches, technology and knowledge volume in both public and private sectors must be increased. He said it would be impossible to keep up with the times otherwise. According to the Qatari minister, these issues are crucial for them, and from this point of view, Qatar has introduced various practices and legal amendments for the sake of economic development.

Expressing that they launched legal regulations in order to attract foreign capital, al-Thani stated investments in the country rise with every passing year and they have made new moves through development programs. He further noted that Turkey and Qatar established future-oriented cooperation and plans during meetings, expressing his hope that the meetings will benefit both countries. Following the speech, al-Thani was presented a gift by IBF Chairman Erol Yarar in remembrance of the day.

Speaking at the signing ceremony of the Turkey-Qatar Joint Economic Commission, Deputy Prime Minister Mehmet Şimşek said Qatar discriminates in favor of Turkey with not only just words but also with action and supports Turkish firms' operation in the country, stressing that Qatar is the seventh country where Turkish countries undertake the largest number of projects.

Turkey-Qatar Joint Economic Commission protocol was signed between Deputy Prime Minister Mehmet Şimşek and Qatari Economy and Trade Minister Ahmed Bin Jassim Bin Mohammed Al Thani on Thursday. Şimşek said the signed protocol will contribute to the important collaborations between the two countries in the fields of economy and politics.

Noting that there is a solid project and outcome-oriented effort between the two countries along with a strong relation between their SMEs, Şimşek said they have a business forum plan in progress.

Touching upon the perfect political relations between Turkey and Qatar, Şimşek noted that both countries focus only on opportunities and possible projects in both of their homelands and third countries in their talks. Stressing that solid projects should be the main objective, Şimşek said there have been important developments in the trade volume between the two countries; however, it has not reached the desired level yet.

The number of Qatar-affiliated companies in Turkey has reached 99 with a $ 1.2 billion worth of capital inflow from Qatar, Şimşek said, adding that Qatari-based firms will hopefully take over an active and important role in the future and make substantial contributions to the investment and trade between the two countries.

Pledging that a new incentive system will be put into effect to boost the commercial relations, Şimşek said the Turkish contracting firms operating in Qatar has so far taken on $13.7 billion worth of projects in total. According to Şimşek, Turkish firms mostly take part in highway projects, followed by metro, airport and port projects. Stressing that Turkish firms showed a noteworthy success in the Duha metro and airport projects, Şimşek said they are also willing to take part in Qatar's 2022 World Cup organizations.
RELATED TOPICS